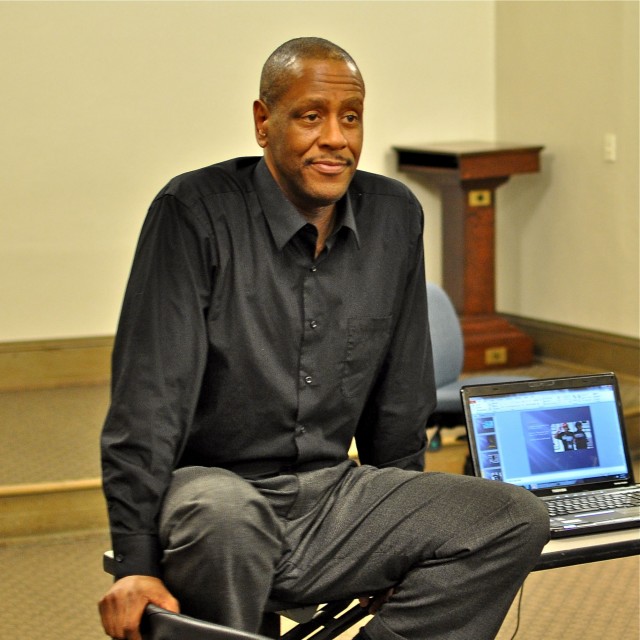 On February 22 at the public library on Killingsworth, Ahjamu Umi led a discussion of identity and the N-word. He began with a short film in which Malcom X asks, “Who are you? What were you before the White man named you a Negro? And where were you? And what did you have? What was yours? What language did you speak then? What was your name?”

February 21 was the anniversary of the day in 1965 when Malcolm X was assassinated for being involved in the struggle for justice and liberation. Umi, picking up where the Malcolm X film left off, explained, “Identity is what it does. We’ve been programmed to identify ourselves based on other things than what we do and what we’re about.”

Umi describes an international effort to shape the identities of people of African descent, an effort that involves, he says, “First, getting people who look like me to leave their African identity, and second, persuading them to believe they’re inferior. It’s a process that allows the system to continue as it is. For us, the system isn’t broken. It didn’t just suddenly break. It’s very successful at doing exactly what it was designed to do, which is break people down and hold them down.”

Umi continued, “America has always been about profiting off African people’s humiliation. And there’s nothing contemporary about the N-word. It didn’t get invented by the rappers.” Umi showed the group a picture of an ad, published early in the twentieth century, for a product called “Nigger Joe’s Tar Soap.” He showed a poster for the D.W. Griffith film, “Birth of a Nation,” glorifying the Ku Klux Klan, made in 1915, and concluded, “Exploitation sells. It sold in 1915,” and then he showed a slide of young men in 2010 wearing T-shirts with the N-word on them, “And it sells now.”

Opening the discussion to the room, Umi asked people to talk about times when they’ve used the N-word or heard it used, and to talk about how it felt and what it meant to them.

One of the people in the audience said, “I admit I’ve used it. I’ve called people by that name. Maybe it seemed cool to do that when I was in high school, but I don’t use it now. I think the N-word creates a divide; it’s not about solidarity, even though some people use it as a greeting, or they address each other, “What’s up my dawg?” I have to wonder what makes us want to equate each other to dogs. What could it be, except basically saying your friend is sub-human?”

Umi responded, “There’s a history to that. That’s why I say the system is not broken, it’s working well–for keeping people down, breaking people down. There’s pain behind the N-word. We have to engage people around these questions–how is the use of that word perpetuated today? Who benefits when the N word is used? We have to ask that question. Who is served by the use of that word?”

First, they can join Occupy the Dream group, comprised of people of color and whites within the Occupy movement who want to build a segment of Occupy Portland to reach out to people of color, dealing with issues like police brutality and foreclosures. That group meets every Monday at 5:30 p.m. in the Occupy Office at St. Francis Church.

Second, they can join Occupy Northeast, “the Black Working Group,” which meets from 3 to 5 on Saturdays at Reflections Cafe and Bookstore, 446 Killingsworth.

Umi also invited anyone interested in the All African People’s Revolutionary Party to talk with him about it.

February 28th is a rally for Siddharta Fisher on the Clark County Courthouse steps from noon to 1 p.m.

February 29th is the Rally to Shut Down the Corporations. A day of action with rallies, marches, and activities beginning at 11 a.m. at Naito and Ankeny.

On March 14 is a Women’s History Month discussion and presentation at the Northeast Public Library, 512 Killingsworth.