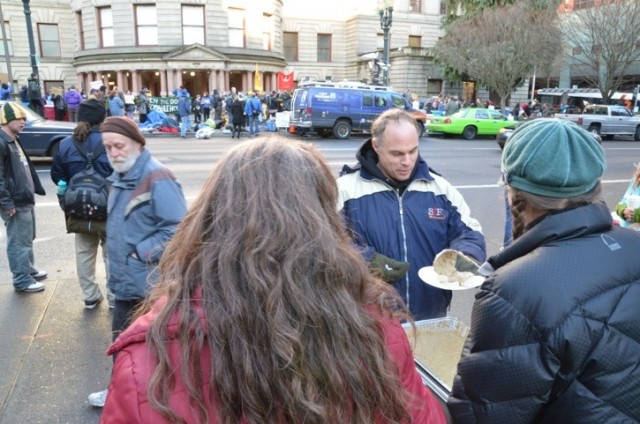 In the early morning hours of the 21st of this month, two Occupy Portland participants and former Chapman and Lownsdale encampment residents were shot in an act of random violence while asleep under the Morrison bridge. Both men are reported to be in fair condition. The victims have been identified as Carter “Joe” Hickman, and 43-year-old Albert “Allen” Dean Hickman. They had been turned away from the Right 2 Dream 2 tent encampment in downtown due to lack of space. Right 2 Dream 2 turns away about 20 houseless people per day for the same reason. They had been staying at the Occupy Portland camps in Chapman and Lownsdale Parks before these camps were evicted by the police.

No suspects have been identified, but Portland police are looking for a black, or dark-blue newer Volvo station wagon. Police are asking anyone who may have seen a similar vehicle before or after the shooting to call the Portland Police Bureau detective division at 503-823-0400.

Crime Stoppers is also offering a $1,000 reward for information that leads to an arrest in the shooting.

This apparently random act of brutality highlights the obstacles facing houseless Occupy Portland participants that have found themselves without shelter since the closure of the camp. Mike Withey Jr, Occupy Portland organizer, states that Occupy Portland is currently in the process of partnering with Americorps and local churches to create a camp for the houseless in Portland that would provide the basic services that were made available during the Occupy Portland encampments.

Hopefully the City of Portland and Mayor Sam Adams will hear the wake-up call and show some willingness to protect the impoverished population of Portland, but if not, the ACLU has expressed interest in filing suit against the City of Portland in regards to the shooting of the two men and the dangerous conditions to which other houseless persons in the Portland area are subjected.