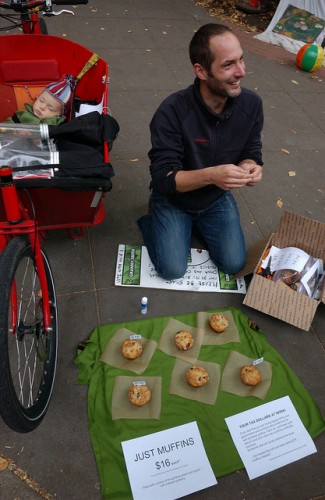 I used to work for a private business owner selling a line of retail food products at Portland farmers markets. Her brand is well-known and has an established customer base, as it’s been a part of the local food scene since the ’90s. I enjoyed the independence this job afforded me and it worked well with my schedule.

However, for every farmers market I worked, if my sales were not on par with what was expected (based on previous sales at the same market) it would be implied that this was somehow dependent on my performance. It seemed to me there were a myriad of variables which could have effected one’s likelihood to purchase this specific product on a given day.

At one market in particular, for example, it could have been the presence of a falsetto-singing musician strumming away on his banjo directly across from my booth space which caused a dramatic slump in sales. While passersby were busy scoffing at his performance, I put a dollar in his hat for making an unusually high-pitched version of a Leonard Cohen song (on a banjo), somehow, work. But I digress…

Also important to note is that I got paid the same rate per market that I worked, regardless of the financial gain (or loss) on the owner’s behalf. Maybe if I had been paid a commission, my likelihood to really go the extra mile would have increased.

I was let go from my job at the farmers market, for not bringing in enough money for my employer. I took a lot of pride in being a part of the local markets, and contributing to the community, but my situation is similar to many others in a capitalist society. Profits become the most important element in the business equation, at the expense of workers and, eventually, whole communities. (After all, workers are the community).

Regardless of my ever-present bitterness at the necessity to work for the man, I did recently come across some interesting information which speaks positively of the future for the artisan entrepreneur in the Pacific Northwest.

According to Charles Heying, author of Brew to Bikes, published by Portland State University’s Ooligan Press in 2010, “[The] artisan economy is a particular and local response to the larger economic forces that are changing our world. Urban elites largely focus on policies to attract mobile capital and creative workers to their communities.” And at the grass root level, in response to mass consumerism, people are making a shift toward “self-reliance and sustainable development”, thus “reclaiming the integrity of work” (23).

Two distinct periods of capitalist development are often described: Fordism and Post-Fordism. Fordism, named after the “restructuring of economic organization introduced by Henry Ford, is an economic system organized around mass production and mass consumption.” Through mass marketing, a reliance on products to “alleviate the drudgery of everyday tasks” and “an expectation for more and better products and services” has created a “naive optimism about a better future” (23).

This tendency toward blind consumerism and mass consumption is not socially or environmentally sustainable. The gap between socioeconomic levels has grown larger than ever before, with “one percent of the US population owning approximately 40 percent of the nation’s wealth” (“Study: America’s Wealth”), and the commercialization of oil and water resulting in the alarmingly rapid depletion of the world’s non-renewable natural resources.

Post-Fordism is believed to have originated “around 1970 “and “describes the phase shift in the market” (25) that “brought a change in how the market was viewed from a production standpoint. Rather than being viewed as a mass market to be served by mass production, consumers began to be viewed as different groups pursuing different goals who could be better served with small batches of specialized goods” (“Post-Fordism”).

The Post-Fordism school of thought gave way to a “faith in the coordinating power of free markets” (26), which urban elites and grass roots activists have now expounded upon to create the opportunity for entrepreneurial havens. A high standard of ethics in business has created a thriving culture of socially and environmentally-conscious businesses and consumers. This new wave of socially-responsible entrepreneurs and consumers value “going green, challenging the tyranny of work and consumption, voluntary simplicity, a resistance to fast food and the agro-industrial complex (referred to as the slow movement), and rediscovering place and local knowledge, as well as craft and the integrity of work” (34-38).

These facts, outlined by Heying in Brew to Bikes, demonstrate some of the ideological shifts which will be necessary in order for small business owners and local communities to triumph over the corporate interests that currently fuel our economy and control our livelihood. It’s easy to be discouraged in trying times, but at least there’s still hope for the underdog.