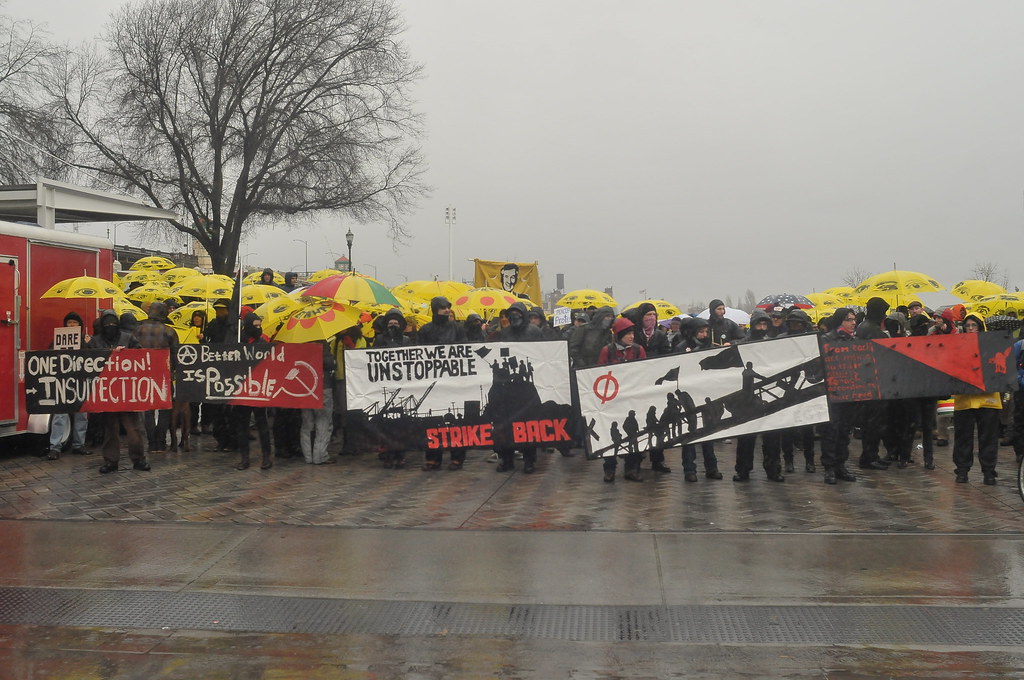 It was just a few hours of one day, February 29th. It was leap day in downtown Portland and we were gathering under the Burnside Bridge and being Portland, it was raining. I’m learning a little about this town now: Portland is unique it is a quiet city, quiet and unhurried. It does not bustle or boast like Chicago, nor is it pretentious like the trendy areas of Minneapolis where I once lived.

What Portland is, is passionate. It is a union city, an industrial city, a sea port and a railroad city. The rain has so far fallen only in mists and light rain which in no ways reminds me of the tropical downpours of my native South. I marched for a mile through this misting rain and did not get as wet as I have gotten running to a store from a car during a tropical down pour. But still, in Portland it finds a way to rain. It can rain here in the cold, in the warm, and several times it has rained even while the sun shines.

That ain’t nothing though, nothing to which you can’t easily adjust. In Minnesota, the rain piles up in frozen white drifts requiring city crews to work around the clock just to keep the city functioning. In Atlanta and the South warm temperatures (read that as “Damn Hot!” for the out of towners) conspire with the rain to foster the growth of vegetation, forcing cities and municipalities to employ cutting crews over the long warm seasons.

It all depends on where you are and whatever you are used to, because whatever it is, it’s always something. I was on a bus one time when this fellow starts talking about his home town and as the bus turned the corner in some tiny crossroads in Montana, he tells me, “God, I love this town!” His town was a whistle stop to me but it was New York, Paris and Rome to him. We all love where we are from, we all dream of a brighter future, and we all struggle with getting from A to B.

As we gathered for Shut Down the Corporations–the F29 demonstrations in conjunction with Occupy Portland–we were just average Americans of all ages and races. This isn’t really surprising as we are a barometer of this society; we are the people and the mirror image of the people, these demonstrators are a direct reflection of the American populace.

The turn out was at least a thousand and maybe 1200, but hey, this was a Wednesday morning and the assembled group filled the area with their enthusiasm. You can’t take too long before you ask yourself: what if, what if we could get all of this enthusiasm focused, I mean if all the people who could have shown up, had shown up? I’m only trying to point out that each of the one thousand or 1200 people who did show up represent more than just themselves. They also represent the folks who had to work or had to take care of the kids or had to go to school. They also represent the people in the office buildings who waved to us as we marched and they also represent the drivers in the cars and trucks who blew their horns in support of us.

Since my time of poverty I’ve learned to watch clothing. You can tell a lot about people by looking at their clothes. Not just the young and beautiful women but the men my age as well, in their worn ball caps and fatigues. They wear the clothes of service, hard work and of giving. Not just raging Grandmas, but ornery Grandpas too. Twenty-somethings worried about tomorrow and willing to do something about it. Between the ages of 20 to 26 there are literally hundreds of distractions, besides coming downtown in the rain to protest what ALEC and other corporate entities are doing to this country. I know, because I’ve done most of them, but that is a part of what makes these people so special.

These people give up their recreation time, they give up everything fun you could do at those ages to protest in the streets and in the rain. It is nothing less than what Thomas Paine was talking about when he coined the term the “Sunshine Patriot”–these are indeed true patriots. There are just so many ways to sieve this out, what number would you put on this demonstration when you realize how many young people these young people actually represent? They are young and bright they have done great things already and I feel certain that they are just getting started. 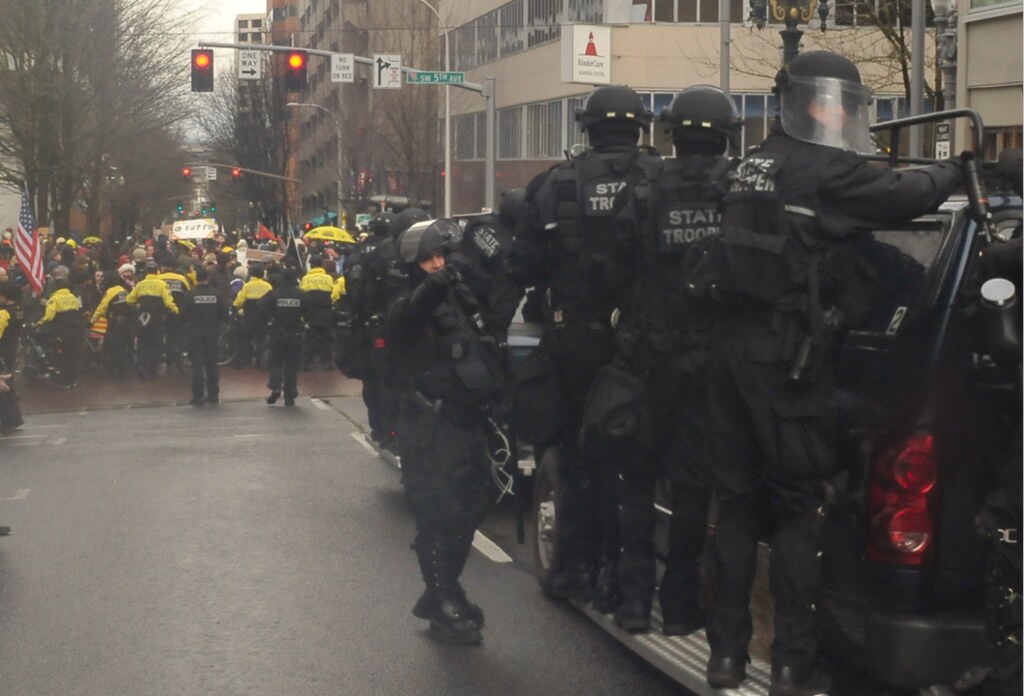 It was however somewhat sadly amusing that as we waited under the Burnside Bridge to march through the streets of Portland, telephones were ringing and threat levels were being assessed. Assessed for what? Assessed by people who are bothered and scared by people like us, average Americans of all ages, races, and persuasions who came downtown to march through the streets of Portland in the rain to express our displeasure with ALEC and with the creeping hand of corporate Fascism.

Why should they be so afraid of us? A guilty conscience perhaps. I mean, why should they send dozens and dozens of police? Horse-mounted, bike-mounted, motorcycle-mounted, cars, helicopters and even the riot squad made an appearance, charging in on their black Batmobile van armed with paint ball and beanbag guns. Jesus Christ, is the President coming too?

Of course, the universal rule of law enforcement says if you deploy X number of policeman you should net X number of arrests. It is a corollary to the traffic ticket quota rule. So of course the police had to make arrests, otherwise, the news media would have been forced to report that a thousand to 1200, everyday Americans of all walks and differences, marched through the streets of Portland in the rain to peacefully protest the creeping corporate Fascism here in America.

The point was aptly illustrated by our own FoPo, a mock police squad dressed in comic police uniforms. They weren’t mocking the police so much as mocking idea that there was a need for this kind of police presence. All of the arrests came on the periphery of the demonstration, how odd is that? That in this large body of demonstrators those requiring to be detained by police would be on the edges and not in the body of the group. It is counter-intuitive that it should be so in a large demonstration and so the onus clearly falls more on cops out to making arrests just on general principle.

In this passionate city well over one thousand citizens showed up on a cold rainy Wednesday morning. They love their city, they love their country and they are on the road from A to B. They put down the tools of their lives, they put down their pleasures and they did so to speak their minds to government. While the corporations and government might not publicly acknowledge the receipt of our message the number of police and equipment and resources tells me our message was received and understood.

We are like seed corn; from this number comes many more. There are answers to these problems and they begin with a thousand or 1200. Each marcher walking in the streets for the ten or twenty more who would have if they could have. Looking at the demonstration in this light those 1200 represent twelve to twenty five thousand people, and what’s more, those nervous hands on telephones damn well know it.

There was something special about the day besides just the date on the calendar. There is nothing I’ve found which feels more liberating than marching in the streets. That is the real America, that is how it works and in this passionate city it works good.

6 comments for “Getting from A to B”