This article is from the Occupied Media news wire. It was originally published over at the Occupied Washington Times.

Braving torrential rain, police violence, and a sea of red paint used for street theater, around 50 Occupy DC occupiers and their allies blockaded Monsanto’s downtown D.C. office for almost two hours. The protest was a part of a set of nationwide Shut Down The Corporations rallies in solidarity with Occupy Portland on the morning of February 29.

Occupy protesters around the country chose various member corporations of the American Legislative Exchange Commission (ALEC), including Monsanto, as targets on this day to protest the policy lobbying group’s ghostwriting of legislation that favors corporations at the expense of consumers.

“Money for [Monsanto] comes before public safety and there has to be a line drawn,” said Mike Basillas from Occupy DC, explaining the choice of Monsanto as the target of the D.C. protest. 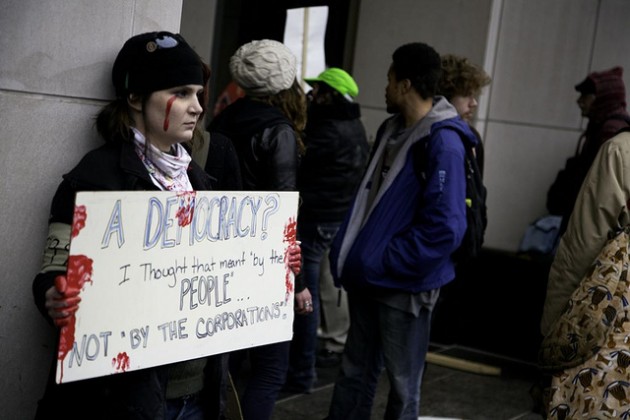 ALEC represents over 300 corporations, so there was no shortage of targets. ALEC members include: AT&T, Bank of America, Kraft Foods, McDonald’s, and Walmart.  ALEC also counts among its stakeholders 85 members of Congress (of both major political parties), 14 current or former governors, and over 2,000 members of state legislatures. These individuals often take sample legislation written by ALEC and present them directly in their legislature.

A set of ALEC-authored voter ID laws has been particularly controversial recently.  Many voting rights groups say the laws could disenfranchise up to five million voters in the United States.

At around 7:30 a.m., Occupy DC created a human chain to block the entrance to Monsanto’s offices at 1300 I St. Several Monsanto employees were prevented from entering the building by protesters. After attempting to violently shove protesters out of the doorway and ripping sign out of the their hands, police set up a perimeter in preparation to arrest protesters.

In total, there were 12 arrests of peaceful protesters, some still seated as they were handcuffed,  for “disobeying police orders,” according to Jacob Schubert of the National Lawyers Guild.

One American University student who was surveying occupiers about police violence and not actively taking part in the protests was herself somewhat violently arrested for being in an area that the police considered off limits. “[The police] strategically targeted females,” said Basilas, “and they physically carried [this particular AU student] out of the area.”Monstanto came under fire from several Occupies for, according to Occupy Portland’s press release on Shut Down the Corporations, working with ALEC to draft  ”pro-genetically modified food preemptive bills which strip cities and counties from their ability to regulate the planting of [genetically modified] crops and pesticide use.”Genetically modified seed has been shown in studies to have potentially harmful effects on those who consume the crops grown from them.  In 2010, increased rates of organ damage were  shown in a study in the International Journal of Biological Science among animals who were exposed to the genetically modified seed products.Monstanto is currently responsible for 90% of genetically modified seed in the United States, according to the Natural Society. The group recently awarded Monsanto with its “Worst Company of 2011” award.“Monsanto is killing a generation of Americans,” stated Lacy MacAuley of Occupy DC, “and they are wielding corporate power to keep us from knowing about it.”The company is “pushing farmers out and pushing their own agenda,” said Basillas.   “[Profit over people] is something that’s commonly seen in their products.  If they’re mindful of people’s health, I’ll support them.  Unfortunately, they’re going the other direction.”