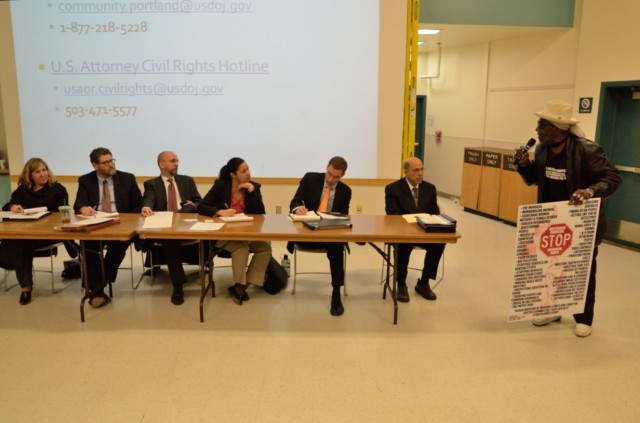 Police brutality — something I never thought of when I was a kid. Something I never really thought of as an adult, that is until protesters of the Occupy movement collided with police in Portland and throughout the rest of the country. As news from other cities poured in, I kept asking myself, is this really happening? And, am I supposed to be afraid? Am I afraid?

At a march earlier this year, I decided pretty quickly that I wasn’t afraid. Police declared an emergency closure of Shemanski Park at 9 pm and I decided to stay. I took refuge in my car where an officer shined a flashlight inside, saying, “In here!” I ducked down in front… I was a little afraid now.

So naturally, when I heard there was a meeting on the subject of police brutality at my local community center, I decided to attend. To my delight, I arrived at a community gathering of over a hundred people and a panel of local and national U.S. Department of Justice (DOJ) staffers leading the discussion.

A little background on the U.S. DOJ, that I admittedly did not know much before the meeting. According to the U.S. DOJ 2011 annual report, the U.S. DOJ is made up of 40 different offices, bureaus, and divisions. As of last fall there were 116,105 employees, 32% working in the Bureau of Prisons, followed by 30% in the FBI, and 19% in various “Offices, Boards, and Divisions.”

To enforce the law and defend the interests of the United States according to the law, to ensure public safety against threats foreign and domestic, to provide federal leadership in preventing and controlling crime, to seek just punishment for those guilty of unlawful behavior, and to ensure fair and impartial administration of justice for all Americans.

The U.S. DOJ exists to “ensure public safety.” When I walked in to the meeting, there were eight people on the investigatory panel, all witnessing the testimony of a man who spoke of his brother being punched in the eye three times by police and his sister’s leg slammed in the door three times by police. After his testimony, he invited everyone to attend the F29 protest and watch police, “vigorously put down protesters.”

Chris O’Connor, a local attorney who works as a public defender and is also on the board of Mental Health Association of Portland, gave a testimony about his clients. Chris said that he tells his clients “every day” that the police can “shoot you in the back and three days later” you can be held for “contempt of arrest.” Chris said that these are “police-initiated interactions” arising from “mostly non-violent misdemeanors.”  “Force is initiated by police,” he said. He can list “thousands of reports,” recognizes “patterns of cases,” and he can name 25 police officers, a select group, that initiates contact (i.e. the police pick a fight).

Over a dozen other testimonies were made. Several people, including Reverend Dr. Leroy Haines of the Albina Ministerial Alliance, and lawyer Kelvin Hall, got up and spoke about how minorities are targeted specifically, whether it’s supposed members of gangs, or kids, or families. Dr. Haines spoke of “Jim Crow” laws in Portland and asked that officers be held accountable. In emotional testimony, Mr. Hall asked who regulates the system and where should citizens go to file a complaint.

Patrick Nolan said that when he was homeless, he realized the cops could kick you to wake you up, and that police who committed crimes against citizens are not being held accountable. Dan Rayfield asked that the committee look deep through police dispatch records, and that they will see patterns that violate civil rights.

Others spoke up about mental health. One mental health worker said that she gets calls from African-American women who are accused of being prostitutes; she said she does not have words for the way she feels. Julie Cloth spoke about her brother’s struggle with paranoid schizophrenia. During his first break, the police showed up, and the brother wasn’t able to talk to the family. The family now calls Project Respond — the city’s mobile mental health response team — instead of the police, if he’s struggling. Ms. Cloth asked that there be more programs like Project Respond.

Still others spoke about police brutality during recent Occupy Portland events. Occupier Arlo Stone spoke of how, while fighting small traffic violations (as a cab driver) he’s seen a disproportionate amount of minorities being tried in court. Stone also spoke of the Portland Police Bureau’s “buddy-buddy machismo system” that is “reinforced by the head sheriff”. He said the system is poorly designed to make everyone accountable, and that part of the problem is that Chief Mike Reese brings police from outside of Portland to “shoot [us] with tear gas.”

About half way through the hearing, I felt empowered by others testimonies and put my name on the list. I soon found myself discussing my first interaction with police during a psychotic episode, the negligence of Portland Police while I was working for the City of Portland (I called for backup over a woman wandering around with her dress pulled up over her head. The police said she was “high as a kite” and took off), and I referenced an article I wrote for the Occupier about police and homelessness. I felt pretty worked up and got one smile from the committee.

The town hall ended when one of the members of the DOJ stood up and shared the phone number and website where people may share more experiences. He said the committee has heard from hundreds of people and that there are currently 17 investigations occurring across the country.

He said, “We are humbled by people coming out tonight and telling their experiences. We can’t promise you what the results will be. I encourage you to look at the work we’ve done in other jurisdictions. It took your evening, your courage– we’re humbled by that and very grateful.”

There was some discussion about people who did not feel safe coming forward for the meeting, in fear of repercussions by police. A representative of the ACLU played a recording of a woman who was afraid to come that night. She had been accused by the police for stealing mail — they had taken down her information and would not give her a card with their information. On the recording she sounded upset and afraid.

The committee encouraged anyone who was unable to or was afraid to attend the meeting, or who has additional comments about police use of force to contact the U.S. Department of Justice by email or phone: 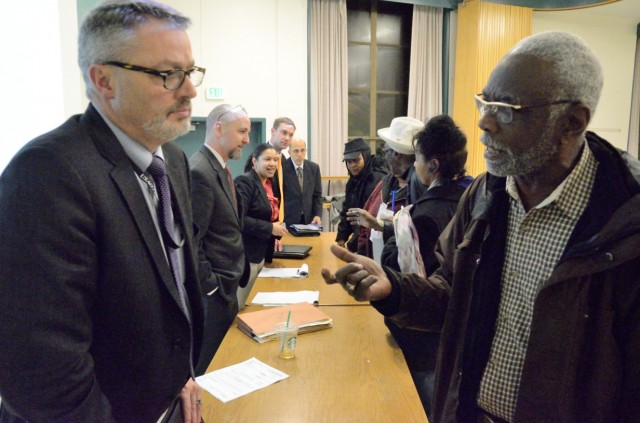 3 comments for “Breaking the Blue Code of Silence”