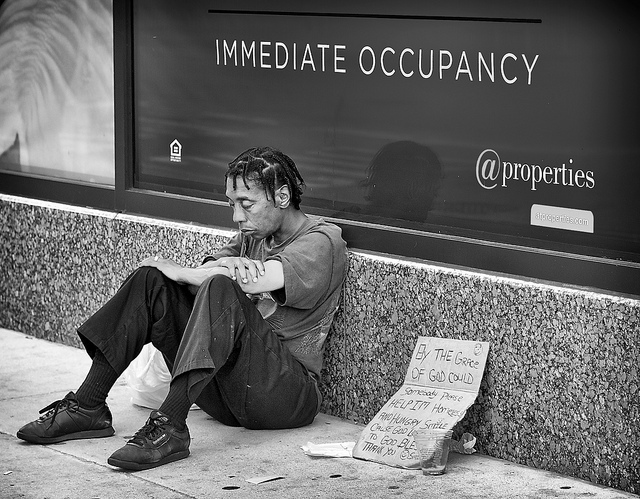 A man waits for change in the Loop, September 15, 2011. Photo by Joselito Tagarao

This morning at 6 a.m., Mercy Housing Lakefront, a subsidized housing provider, opened up “wait lists” to two of its apartment buildings: the Belray apartments at Belmont and Racine, and the Major Jenkins Apartments at Winthrop and Argyle. In total, Mercy Housing will accept 325 new applicants to its waiting lists. Between the two buildings, there are only 230 apartment units, all of which are inhabited, presumably, as it’s only the waiting lists that have openings.The extent of homelessness in our city could be seen in the long queue that formed outside of the American Indian Center (AIC) at 1630 W. Wilson, which allowed Mercy Housing to use its space for the sign-up process. The first hopefuls began to show up at 3 p.m. yesterday afternoon, prepared to sleep outside through the night. Many had left the warmth of their temporary shelters for the chance of more permanent housing.

These early birds were friendly and optimistic. The temperature was still mild, and they were sure they’d get a good spot on the list. But because the AIC was hosting a concert Monday night, it called the police to send them away. An employee at the center said they had warned the crowd that they couldn’t start lining up until 4 a.m. the next morning.It is common for the homeless to arrive at these sign-ups early, so common in fact that the flyers Mercy Housing distributes for the events advise anyone interested to show up well in advance.By 11 p.m., despite the earlier police dispersal, there were about 100 people in line. By 5 a.m., there were well over 500. The scene quickly became chaotic as 6 a.m. approached, and as more hopefuls continued to arrive. People were surging to the front of the line at the top of the stairs, yelling at each other for cutting, or defending themselves against the allegations. Women in wheelchairs who had been waiting patiently at the bottom of the access ramp lost their prominent spots. The crowd all but blocked the doors from opening.

The police and hired security tried to instill order, but largely failed. Addresses to the crowd to take a step back were not heeded, as everyone was afraid of losing his or her place. When Mercy employees finally opened the doors at 6:10, they announced they would only be letting in ten people at a time. The desperation of the crowd manifested itself in angry shouts about the cold, the police, the lack of bathrooms (those who absolutely had to go would discreetly peel off towards the alley), the neglected women in wheelchairs, the one purportedly homeless man who showed up in a cab and tried to claim a spot near the front, and this reporter, who at least one man thought was not helping anyone at all.

A caseworker that was there to help guide his client through the process said that the sign-ups were usually much better organized. They are generally not held in the winter, when the freezing temperatures (last night saw a low of 27 degrees) put the homeless at risk. And usually, before the doors open, organizers pass out numbered tickets to those who have been diligently waiting in line.

Some of the stories of those waiting highlight the need for affordable housing:

William Moore has lived at a shelter for three months. As there’s a four-month limit, he has a month to secure housing before being out on the streets. Before the shelter, he had lived directly on the streets for a week and a half. Before that, he had lived in his car, until it was hit and totaled, while he was inside, breaking his nose in the process. The police also gave him a ticket for having a license that had been expired for three weeks.

Like others waiting in line, Moore says he had been living in a house before the landlord stopped making payments on the mortgage. He was forced to vacate, and had to give up his two dogs and two cats. Moore was well prepared to sign up, and showed all of his official papers. To be eligible for half of the open apartment units, an applicant must have a “homeless letter” and proof of disability payments. For the other units, applicants must prove they are homeless and earn low income. “Being homeless here is a process, you have to take the steps,” Moore says.

Felicia Jean Gardner is a cancer survivor, who was recently re-diagnosed with the disease. She needs to undergo a new round of chemotherapy, but wants to secure permanent housing so that she can have a caregiver visit her at home. She’s been staying at shelters for years. “I just need a place to stay. I can’t keep going from shelter to shelter,” she says.

Gardner says that she is the victim of one of the first identity thefts. The case is nearly twenty years old, but it still affects her life everyday. Though her credit rating has been cleared, she still has a criminal record for fraud, she says, because the thief bought properties and vehicles in her name all across the country, but didn’t have the money to make the payments.

If successful, the Mercy Housing waitlist will be the second one she’s on. She applied at the Roseland apartments three months ago, but still hasn’t heard anything back. She says it’s nearly impossible to secure housing with a felony conviction.

Harrison J. Owens has been homeless for three and a half years. He’s lived on the streets and off-and-on at five different shelters. Before that, he had been renting an apartment in a building that was condemned by the city and foreclosed. He and the other tenants were evicted.

“It’s real hard—everything’s over five-hundred dollars—and I’m not making but six-ninety,” he says. His wife, who has a pending application for disability payments, is sick and staying with family. “I’m hoping and praying I get a place,” Owens says.

2 comments for “The Unmet Demand for Subsidized Housing”