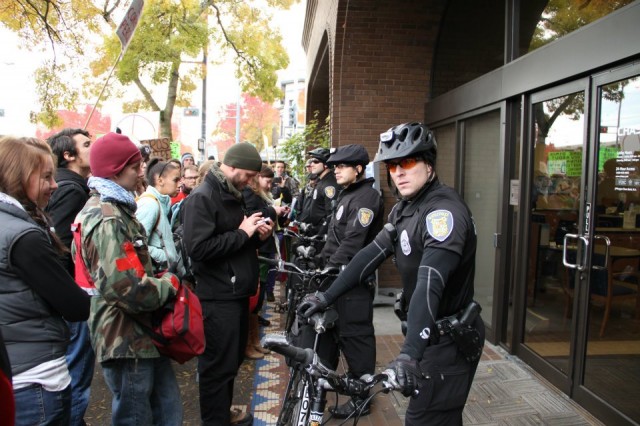 The trial of five Occupy Seattle participants, known locally as the Chase 5, will begin on March 13th in Seattle Municipal Court. The date coincides with a National Day of Action against Chase Bank with planned protests taking place in cities across the country. The CEO of JPMorgan CHASE, Jamie Dimon, will be celebrating his birthday on the 13th, while the five occupiers face trial.

Supporters plan to pack the courtroom, hold demonstrations outside, and conduct an action against a local Chase Bank branch.

“We pleaded not guilty because shutting down Chase Bank wasn’t simply the right thing to do,” said Chase 5 defendant Mike Stevens. “It was necessary. We’re looking at jail time for taking a stand. Meanwhile, Chase bankrolls the displacement of working class communities, finances environmental destruction, and profits from the growing poverty and misery of the 99%. From determining government policy to reshaping neighborhoods, Chase plays a heavy hand in suffocating our public sphere. It’s time we started taking it back.”

The Chase 5 are facing a year in jail for chaining themselves together inside a Capitol Hill Chase Bank branch on November 2nd while hundreds protested outside, shutting down the branch for the day. The act of civil disobedience took place during a visit to Seattle by CEO Jamie Dimon, dubbed by the Seattle Times as “the top 1 percent of the top 1 percent.” Massive street protests continued through the evening outside the Sheraton Hotel, where Dimon was speaking. 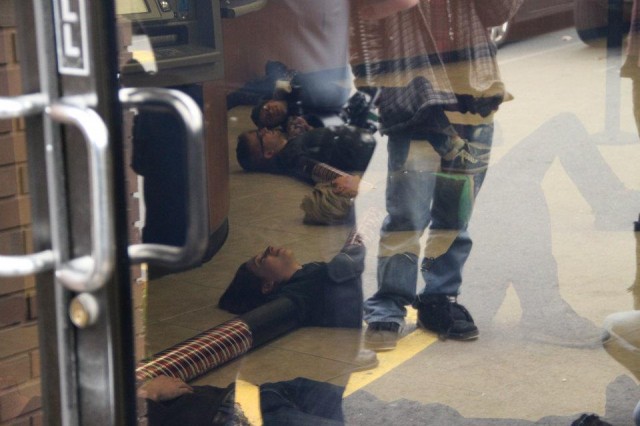 “On March 13th we will once again show our defiance to Dimon and the 1%. They, and their representatives in both parties, have proven that their power is illegitimate and that they have no right to rule,” said defendant Douglas Van. “We are facing jail time for struggling for a better world when the real criminals, people like Jamie Dimon, roam free.”

“We hope that the Chase 5 trial further unmasks the relationship between corporate power and political repression,” added Hudson Williams-Eynon, a Chase 5 defendant. “Our police and our politicians can’t or won’t protect us from the banks, but we all remember when Chase Bank donated $4.6 million dollars to the New York Police Department the day after NYPD kettled and arrested 700 Occupy Wall St. protesters. It was like a reward. The banks want Americans to go home and shut up. Financial institutions like Chase are the real authorities in this country, and now everyone can see who calls the shots.”

Leading up to the trial, local and national supporters are pressuring Chief Prosecutor Craig Sims to drop the charges against the Chase 5.

“For staying in a bank and refusing to be silenced, we have been met with the violence of the system,” said Sarah Svobodny. “We’ve seen people pepper-sprayed, struck with SPD bicycles, tackled from behind by plainclothes police, hit in the head with batons, stomped on by horses, hit with flashbang grenades, and arrested at gunpoint by SWAT teams. Now our movement is confronting a different kind of violence, which is to say the subtle violence of the 1% through their courts and their prisons. We no longer have any illusions about who this system serves and we will continue to fight for a new and different world.”