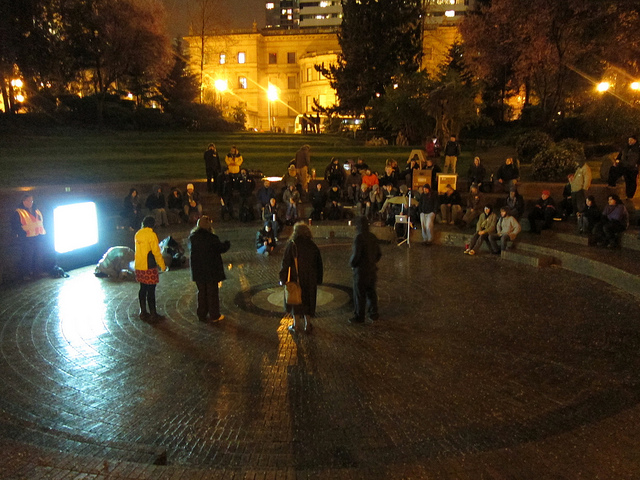 On Sunday March 25, for the first time since eviction, Occupy Portland General Assembly was held in Terry Schrunk Plaza. For the past four months the GA has been held under cover at Director Park, eight blocks away. It was moved back to the open air venue, for one night, in solidarity with the Defend Human Rights: End the Camping Ban Rally/March/Sleep Over in front of City Hall, just a stone-throw away.

Attendance was about fifty, twice what the attendance has been at recent GAs.

The Assembly was expertly facilitated by Ani and Mario who have been doing yeoman’s work lately, both in the parks and at Saint Francis. The facilitation team could use some help. They have training sessions scheduled at St Francis the 2nd Saturday of the month at 1:00pm and the 4th Tuesday at 7:00 (Movement Building).

The agenda was crowded, with thirteen proposals for consensus, including support for the Occupy the Post Office National Day of Action on April 17th, a demonstration outside the Multnomah County Courthouse on April 2nd to support Occupy Arrestees, an LGBTQ Human Rights Action Day on April 21st and a Teach In about Iran on April 14th.

Next week the OPDX GA will be back at Director Park, but when the weather gets warm and the rains end expect Terry Schrunk to be the home of GA once again. 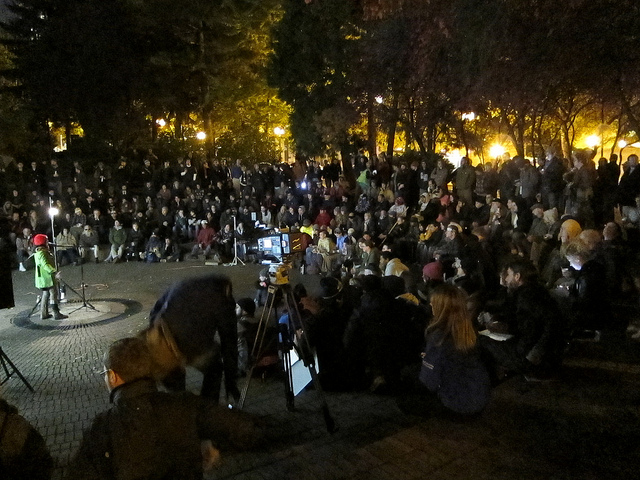