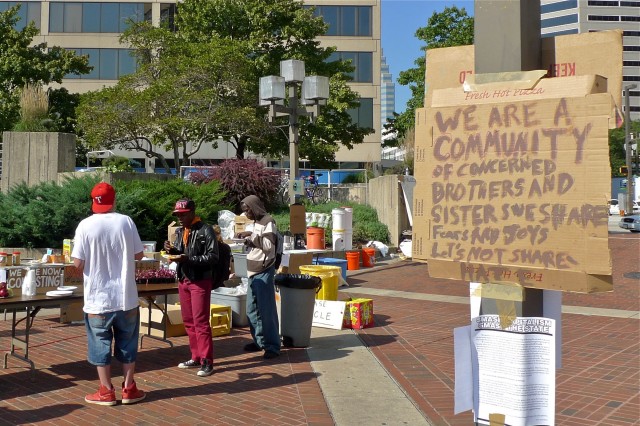 Note: Throughout this article, people are identified as white or black, because the historical perception of “white” and “black” is part of the power dynamic being described. In his book “Race Matters”, Cornel West writes, “Without the presence of black people in America, European-Americans would not be “white”– they would be Irish, Italians, Poles, Welsh, and others engaged in class, ethnic, and gender struggles over resources and identity” (pp. 107-8).

On Saturday morning, March 24, 2012, at about 7:15 am, three white men in plain clothes waited in a car outside the Portland, Oregon, home of a black man. One of the white men remained in their vehicle, while the other two stopped the black man as he was entering his car, parked alongside Brooklyn Park.

“We want to talk to you,” one said. They asked the black man where he came from, what business he had in Portland, how long he planned to stay in town, and if he had family in the area. Both of the white men were formal, confident, and polite, so the man being interrogated formally, confidently, and politely told them, in answer to each question, that he didn’t care to discuss that. He said he was taking care of his business. They asked what his business was, and if he had identification.  The black man said his business was his business; he acknowledged that he had ID, but did not produce it, nor did they demand he do so. When he made the same inquiries of the white men, they showed no badges, gave no names, and said only that they were employed to keep the neighborhood safe.

The white men would not reveal for whom they were employed, saying, “We are concerned about people coming to the neighborhood to cause trouble”.  The black man replied that he was concerned about the same thing. After he calmly and quietly refused their request to search his belongings and car, the white men asked him to wait. From the way that they moved, the black man believed the men were carrying firearms. He sat on a bench in Brooklyn Park and waited.

The white men went back to their car, returning twice to ask a few questions. They continued to request that the black man wait.  He waited. Apparently the men ran a check on his Oregon license plates, because they told him that they’d established his former residence in a certain neighborhood in another state, information he confirmed.  After more unsuccessful questioning, and a few last remarks, they walked away. The black man was free to go, and he left. Fortunately it was not raining, because by that point he had been detained for two hours.

To people of color in the U.S., this kind of intimidation and harassment is an everyday occurrence. If you have any doubts about this, check out “Driving While Black”, by Professor David A. Harris for the Minnesota Law Review, the work of  Cornel West, or The New Jim Crow: Mass Incarceration in the Age of Colorblindness,  a  powerful new book by Michelle Alexander.

One chapter of “The New Jim Crow” is especially relevant. In Chapter 2, “The Lockdown,” Alexander discusses Florida v. Bostick (1989) in which a young black man, Terrance Bostick, was apprehended by uniformed police performing a “sweep” of a Greyhound Bus. They asked to see his ID and search his bags. Alexander writes, “The officers had no basis for suspecting Bostick of any criminal activity, but they got lucky” (64). With a gun in his face, Bostick let the police examine his bags, even though he knew he was carrying cocaine. Bostick went to jail. Over the following years, Bostick got some support for his appeals on the basis of his Fourth Amendment rights having been violated. (The Fourth Amendment prohibits unreasonable search and seizure.) Finally, however, the U.S. Supreme Court “ruled that Bostick’s encounter with the police was purely voluntary, and therefore he was not ‘seized’ within the meaning of the Fourth Amendment. A reasonable person, the Court concluded, would have felt free to sit there and refuse to answer the police officer’s questions, and would have felt free to tell the officer, “No, you can’t search my bag” (65).

Even armed police have no right to search our bags, vehicles, or our persons without a search warrant; however, it seems television cop shows are the only place where police routinely remind people of their right to remain silent. If any of us are stopped on the street, we do not have to reveal our destination, business, length of stay, or disclose our contacts. We do not have to show identification. We do not have to cooperate.

The man stopped by the three unidentified men on Saturday morning was Ahjamu Umi, an outspoken Occupy Portland activist.  Umi knew his rights. He says now, “The role of these agencies is to squash dissent, and they have a number of tactics, ranging from what happened to me on Saturday, to murder. I’ve been through trainings on how to deal with this, so I knew what I was doing. This wasn’t the first time this happened to me. But I’m willing to bet that what happened this past Saturday is not the end of it, and I’m not the only person they will be trying to intimidate. Other people will be stopped, threatened. It’s their way of saying, ‘We’re watching you.’ People should be aware that this is happening, and they should know how to deal with it if it happens to them.”

If you should be stopped by agents of the State, uniformed or not, remember the following:

You have the right to remain silent.

You are not required to show identification.

You have the right to refuse a search of your bags, your property, or your person unless the agent of the State produces an official search warrant.

If this has happened to you, take notes on everything you can remember about the incident. A project is in the works to collate and analyze this type of data. In the meantime, you can phone the ELK legal hotline at 503-902-5340 and leave your contact information and the general reason for your call. Someone may follow up with you at a later date.