Based on a talk by Jeremy Brecher to Occupy University, Zuccotti Park.

Last December, Occupy Los Angeles proposed a General Strike on May 1 “for migrant rights, jobs for all, a moratorium on foreclosures, and peace – and to recognize housing, education and health care as human rights.”  The idea has spread through the Occupy movement.  Occupy Wall Street in New York recently expressed solidarity with the proposal and called for “a day without the 99%, general strike, and more!” with “no work, no school, no housework, no shopping, take the streets!”  Reactions are ranging from enthusiastic support to outraged skepticism.  What form might such an action take, and what if anything might it achieve?

One thing is for sure: Such a May Day action is unlikely to be very much like the general strikes that have cropped up occasionally in US labor history in cities like Seattle, Oakland, and Stamford, Ct., or the ones that are a staple of political protest in Europe. These are typically conducted by unions whose action is called for and coordinated by central labor councils or national labor federations.  But barely twelve percent of American workers are even members of unions, and American unions and their leaders risk management reprisals and even criminal charges for simply endorsing such a strike.

Most Occupy May Day advocates understand that a conventional general strike is not in the cards. What they are advocating instead is a day in which members of the “99%” take whatever actions they can to withdraw from participation in the normal workings of the economic system — by not working if that is an option, but also by not shopping, not banking, and not engaging in other “normal” everyday activities, and by joining demonstrations, marches, disruptions, occupations, and other mass actions.

This is the pattern that was followed by the Oakland General Strike last November. Those who wanted to and could – a small minority – didn’t go to work. There was mass participation in rallies, marches, educational, and artistic events and a free lunch for all. At the end of the day a march, combined with some walkouts, closed the Port of Oakland. The mostly peaceful “general strike,” in contrast to later violent Oakland confrontations, won wide participation and support.

To understand what the significance of such an event might be, it helps to look at what Rosa Luxemburg called periods of “mass strike.” These were not single events, but rather whole periods of intensified class conflict in which working people began to see and act on their common interests through a great variety of activities, including strikes, general strikes, occupations, and militant confrontations.

Such periods of mass strike have occurred repeatedly in US labor history. For example: 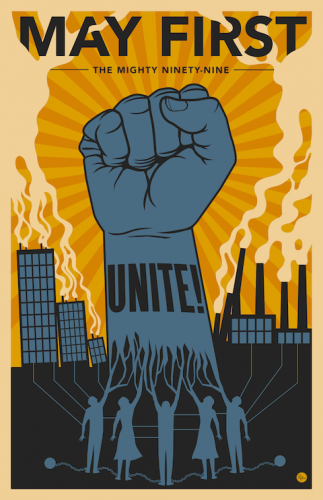 Such periods of mass strike present what Rosa Luxemburg called “A perpetually moving and changing sea of phenomena.” Each is unique in its events and its unfolding. But they are all marked by an expanding challenge to established authority, a widening solidarity among different groups of working people, and a growing assertion by workers of control over their own activity.

However much it may chagrin organizers and radicals, it is not possible to call or instigate a mass strike. It is something that must gestate in workplaces and communities (now including virtual communities). But it is possible to nurture and influence the emergence of mass strikes through discussion and above all through exemplary action. Provoking discussion and showing the possibilities of collective action is what Occupy Wall Street has done so well. That is what its May Day action can potentially do.

What Occupy May Day Could Achieve

The Occupy May Day event is first of all a great chance for 99% to show itself, see itself, and express itself – to represent itself to itself and to others. The kinds of plans that are being made by OWS in New York, with a wide variety of ways in which people are being invited to participate, can encourage multiple levels of sympathy, response, connection, and mobilization among the 99%. The result can be a percolation of the ideas OWS has been promoting through workplaces, communities, and other milieus.

May Day can provide a teachable moment. It is an opportunity for millions of people to contemplate the power that arises from collectively withdrawing cooperation and consent. It can propagate the idea of self-organization, for example through general assemblies. If it truly draws together a wide range of working people, ranging from the most impoverished to professionals, from urban to suburban to rural, and including African Americans, Latinos, whites, and immigrants, it can embody the ability of the 99% to act as a group. It can demonstrate the idea of solidarity, for example by the movement as a whole supporting the needs of some particular groups.  And because May Day is a global working class holiday which will be celebrated all over the world, it can reveal a rarely seen vision of a global working class of which we are as individuals and as members of diverse groups are part.

Given these possibilities, what would constitute success for May Day? Here are some examples of desirable outcomes:

Unions and May Day 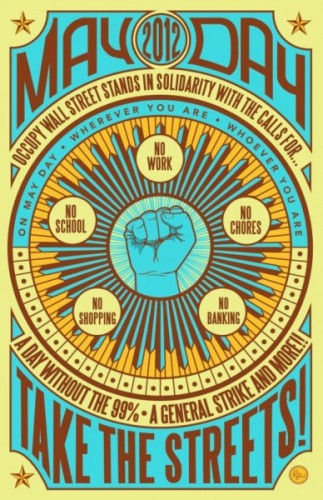 American unions are bound by laws specifically designed to prevent them from taking part in strikes about issues outside their own workplace, such as sympathetic strikes and political strikes. In most cases they are also banned from participating in strikes while they have a contract. Unions that violate these prohibitions are subject to crushing fines and loss of bargaining rights. Their leaders can be packed off to jail. While unions have at times struck anyway, they are unlikely to do so for something like the May Day general strike until the level of class conflict has risen so high that workers are willing to face such consequences.

Historically, American unions have also opposed their members’ participation in strikes union officials have not authorized because they wished to exercise a monopoly of authority over their members’ collective action. In labor movement parlance, such unauthorized actions were condemned as “dual unionism.” US unions have often disciplined and sometimes supported the firing and blacklisting of workers who struck without official authorization. As a result, unions have often deterred their members from participating in mass strike actions even when the rank and file wanted to.

The Occupy movement, however, should not be seen as a competitor to existing unions. It is not about relations between a group of workers and their employer. It does not engage or wish to engage in collective bargaining. Although it supports the right of workers to organize themselves, it is not a union. It focuses on broader social issues. It is a class movement of the 99%, not a labor or trade union movement.

Unions in New York and elsewhere are eager to participate in coalition actions with the Occupy movement – and they are planning to do so on May Day. But to ask them to instruct their members to strike may be to ask them to commit institutional suicide.

One approach to this dilemma may be for unions to say they will abide by the law and not order their members to strike, but that as human beings and as people living under the US Constitution their members are not slaves and cannot be compelled to work against their will.  Where union members want to participate in May Day by not going to work, unions can say, we did not tell them to strike, but we do not have the right to force anyone to work against their will. A historical precedent: When Illinois miners repeatedly went on extended wildcat strikes and Mineworker leader Alexander Howat was commanded to order them back to work, he would simply reply that since he had not ordered the strikers out, he could not order them back.

Organized labor has to change, and activities like Occupy’s May Day can contribute to that change. But they can do so at this point not by making impossible demands on union leaders but by inspiration, example, solidarity, and providing alternative experiences for union members.

We are today in the midst of an unrecognized global mass strike — witness the mass upheavals reported in the news almost daily from countries around the world. Wisconsin and Occupy Wall Street represent the first stirrings of American workers to join this global movement. May Day 2012 will be a global event, and it presents an opportunity to create a new self-awareness of the global 99% and its ability to act collectively.

While the Occupy movement has focused on the issues of economic injustice, it is increasingly addressing another issue that is central to the well being of the 99% — indeed of all people — nationally and globally. In January a resolution passed by consensus at the Occupy Wall Street General Assembly stated, “We are at a dangerous tipping point in history. The destruction of our planet and climate change are almost at a point of no return.”

While climate denialism is still rife in the US, the rest of the world recognizes the existential threat of catastrophic climate change and the necessity of converting the world’s economy to a climate-safe basis. The labor movement in the rest of the world is committed to the economic transformation necessary to save the Earth’s climate. That transformation can be the core of an emerging global program to create a secure economic and environmental future for all by putting the world’s people to work transforming the world’s economy to a low-pollution, climate-friendly, sustainable basis.

May Day has been an international labor holiday for more than a century. But for millennia it has been a day for the celebration of nature. This May Day can be an opportunity to draw the two together to represent the common global interest in creating work for all reconstructing the global economy to protect rather than destroy the Earth. 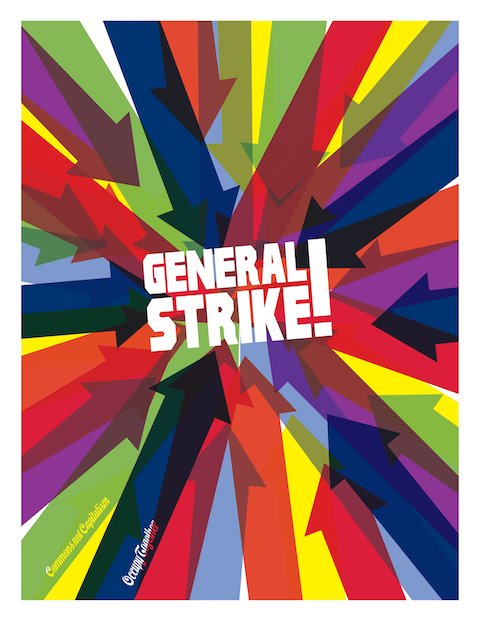 2 comments for “Occupy May Day: Not Your Usual General Strike”