On the one hand, there are the forces of control. There are commercial interests which see the commons as theirs – to transport their goods, to advertise and sell their products, to facilitate the functional operation of the machine. Acting on their behalf are the police and politicians, who enforce this relationship of the public to the commons by criminalizing those who would dare to re-imagine a different use for it. They have had centuries to perfect the practice of maintaining order and compelling obedience. But wherever there are those who seek control over others, inevitably movements of resistance arise, movements aimed at liberating public space from capitalists and authoritarians. The Diggers, in 1649, had already started to challenge the hegemony of the ruling class over the commons, declaring their right to make use of it to feed themselves. They were eventually crushed by landowners and the government. Since then, the struggles can be traced, linking the Diggers with the Paris Commune, the Paris Commune with the Oakland Commune. And before, after, and in between, lay all of the small forgotten acts of rebellion, uncountable but building towards the same end.

We can still see this struggle play out today in a myriad of ways. As Jeff Ferrell notes in his book “Tearing Down the Streets: Adventures in Urban Anarchy,” street musicians, homeless punks, Critical Mass, skateboarders, outlaw radio operators, guerrilla gardeners and hip hop graffiti artists all are combatants in the war over public space, struggling to redefine it in a way that empowers those engaged in resistance while simultaneously undermining those who seek to control it. The threat to the system is two fold. By actively participating in reshaping the commons, those engaged in resistance have opened up space, both in thought and action, that encourages others to do the same, challenging people’s roles as spectators, and helping to develop their capacity to become actors in the public sphere and the social struggle. The more serious threat is the fear of disruption, the break to the monotonous routine that is vital to the functioning of the machine.

Social space is increasingly hard to find. Everywhere we look, we see the public sphere designed and dominated by commercial interests. Outside of our compartmentalized apartments and homes, we are met with a life almost completely mediated by commercial interactions. Stepping out into the streets, we are met with a world that is hostile to us. Because it was never designed for us. It was designed to transport goods, to shuttle workers to their jobs, prisoners to their cages. Cars roar pass, threatening to kill us. Advertisements force their way into our consciousness wherever we look. And should we try to use public space in ways that aren’t part of the commercial spectacle, the specter of the police baton threatens to keep us in line. This was the power of occupation.The reclamation of the parks was a rejection of the designs forced upon us by capitalists and their bureaucratic allies in the local, state, and federal governments. It was the insistence of using public space in a way that met our needs, and not those of capital. At the same time, it brought people together in new ways. While the internal conflicts that existed within Occupy shouldn’t be glossed over, there was a unique environment created, one in which people found a means of relating to one another that was genuine and helped to foster solidarity. There are many competing factions within Occupy, largely divided along class lines. The lack of solidarity from those newly expelled from the middle class has been both troubling and an obstacle to growth of the movement. However, development of solidarity is precisely what’s needed, and where Occupy has been at it’s most powerful.Most importantly, it’s defiant rejection of legality was it’s most inspiring characteristic to those who came to participate in and support the movement. That it refused to be intimidated, that it was willing to be confrontational, that it was willing to break the law. The ineffectiveness of purely legal forms of protest has been recognized by many, which is why those ritualized spectacles lack widespread support. It’s not that people don’t care about the cause being protested, it’s that they don’t think that walking around with a sign will change anything, and rightly so. Just as they know that signing another petition won’t change anything. Just as they know that voting for a different politician won’t change anything. The fact that the original march was organized without the cooperation of the city or the police, independently of established activist organizations with reputations to maintain, was an indisputable part of the overwhelming turnout on October 6th. 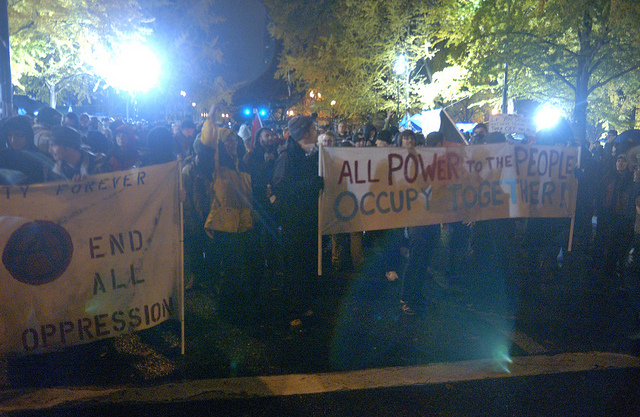 Change will only come when the powers that be fear a loss of control. When they fear that they will become obsolete. When they fear that we will march on their mansions, torches in hand. Which is why occupation as a tactic was so threatening. In bringing people into open conflict with the State, over something as benign as camping in a park, it revealed the State for what it is, the violent enforcers of the Capitalist order. The veneer of social peace was destroyed for those who were not yet initiated as combatants in the social war. In it’s place was a realization that obedience was mistaken for freedom. That we are only free to the extent that we follow the rules. And that those rules are written and enforced to exert social control in the service of the wealthy and powerful.

When the camps were finally shut down, it was because Occupy had threatened to take a more radical turn, disrupting business as usual, moving out of the parks and into the streets. In Portland, it came shortly after the permit free Oakland solidarity march organized by anti-capitalists, which the police and city lamented as dangerous and out of control. It also came just prior to N17, designed as an unsanctioned march and direct action to shut down banks and corporations with lockdowns. Since then, un-permitted marches have faced similar brutality, because disruption of the everyday routine is the most serious threat of all. The deadening of the routine is what slowly kills, breaking it the only solace in an otherwise slow march to death and irrelevance. Most of our lives are spent in the service of others, it is in those moments when we act for ourselves, and see ourselves as capable of shaping the world in a way that meets our needs, we feel truly alive. What we need are more of those moments. Those moments of mass refusal.

Once that disruption reaches levels that bring the politicians groveling with promises of reform, let’s hope that we’re smart enough to realize that their willingness to compromise is a sign of their weakness. Make no mistake, the war of rich against poor will only continue to escalate. Their methods of surveillance and control have been developed for precisely this reason. There’s no way out of this conflict for those in power save for brutally suppressing attempts by the masses to improve their condition. But the battle over the commons will continue. Once repression becomes unsustainable, they will offer us all kinds of deals, as long as we continue to recognize their authority, as long as we allow them to rule us. Hopefully at that point we realize that we don’t have to stop half way, that beneath the pavement, lies the beach.