In an escalation of recent ‘green bloc’ tactics, Mother Nature continued her rampage this morning. This time, a direct-action took form of falling a major limb off an elm tree on the South Park Blocks, causing damage to a parked car and a building, and just missing another potential target, the Starbucks Coffee store.  The limb completely destroyed a Ford station wagon, broke out a large window of a building, and damaged a light pole.

Unlike last week’s protest, the Lorax was nowhere to be found but the Green Man of Portland was standing by for comment. When asked what the trees hoped to gain from their continued self-sacrificing protest, The Green Man read off what he referred to as their “Forest-ifesto”:

“The Ents and other Forest Spirits of Portland were awoken when the Occupiers first climbed atop of the Elk on Main Street. They unlocked us from our silence and we are here now, in the streets, on your cars, in your homes.

We will not be silenced any longer. We will continue putting our bodies on the line until the people of Portland start taking serious steps at reducing their damage to our land, our water, our air.

Bicycle, take the bus, or walk. Turn of your TVs and return to the forests from which you came. Reconnect with us. We are not your slaves or property, we are your friends. We demand respect.

Some citizens and members of Occupy Portland are hesitant to be seen siding with nature’s tactics, as they view property destruction as violent behavior. However, stopping the corporate machine in its tracks, using body and limb seems to be the tree’s chosen method of protest. The Tree, when asked for comment responded:

“You cut down my brothers, grind them, drown them and press them into paper, you bury radioactive material into our birthplaces, pump choking chemicals into the air and dig up rocks to crush and pave over our meadows and then you complain of us being violent towards you? We’re done with these double standards.”

City crews worked for three hours this morning to remove the fallen limb, and were planning on removing the rest of the tree, “so as to not let it cause further damage”. The choice to murder the tree due to its civil disobedience marks an alarming escalation by authorities in the way they deal with protesters. Tree rights activists and lawyers see this as an early manifestation of a truly repressive police-state riddled with paranoia, reminiscent of Stalinist Russia circa 1951.

“They will start with the tree protesters because they lack a voice and representation, and soon soon they will expand to silence all of nature and humanity,” said the Green Man of Portland. “It’s time to start thinking and acting like the interconnected life we are, not just fodder for the machine.”

Nature’s direct-action has been in solidarity with Occupy’s Earth Month efforts with disruptdirtypower.org. 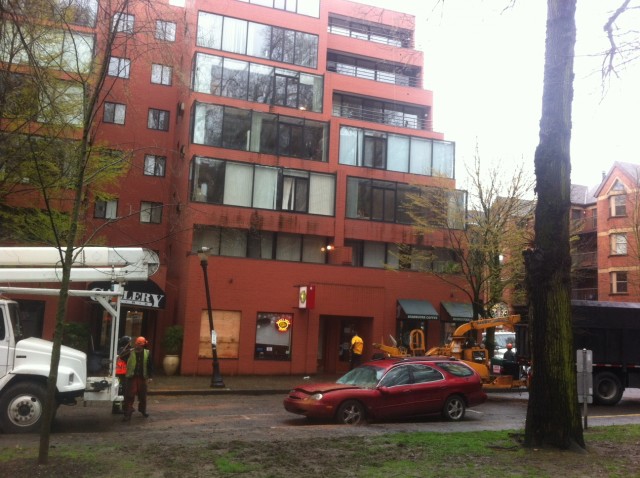