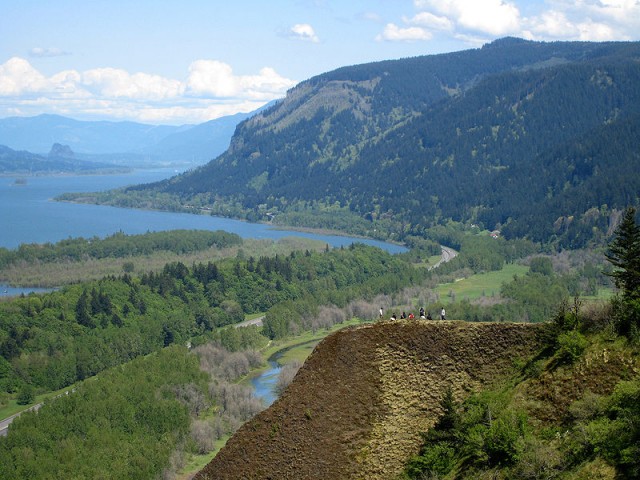 On February 29th the Oregon Water Resources Department (OWRD) approved the first two of three permits necessary for Nestlé to gain access to Oregon’s public water resources and establish a bottling plant in the Columbia River Gorge. Nestlé is proposing a bottling plant for Cascade Locks that would draw over 100 million gallons of water annually from Oxbow Spring, which is fed by Mt. Hood National Forest and located in the Columbia Gorge National Scenic Area. The water is currently used by the Oregon Department of Fish and Wildlife for its fish hatchery – read, the water is currently public – but under Nestlé’s proposal would be bottled and sold under Nestlé’s Arrowhead and Pure Life brands.

The two recently approved permits are ‘housekeeping’ measures that lay the groundwork for the next and final permit necessary to transfer water from Oregon Department of Fish and Wildlife (ODFW) to Cascade Locks, which would in turn sell the water to Nestlé. The water transfer agreement would provide Nestlé access to 0.5 cubic feet per second of water, which adds up to roughly 225 gallons a minute, and over 100 million gallons per year. Although the state won’t receive any compensation from Nestlé for this water, Nestlé stands to profit enormously off of the exchange. It is important to note that Nestlé’s name does not appear any where in this permitting process. Instead, it is the State that is pursuing the permits on behalf of an international corporation, which raises concerns over transparency and the fate of public access to water resources.

The Consequences of Bottled Water

Bottled water has grave environmental impacts. As climate change moves us into an era of uncertainty for water security, we cannot ignore threats to public water resources. While many assume that water is plentiful in the Pacific Northwest, groundwater is in decline in many areas of the Columbia Plateau, particularly in areas of heavy pumping and irrigation.# Meanwhile, production of bottled water requires up to three gallons of water to produce just one gallon for drinking, meaning Nestlé’s bottling plant would transform millions of gallons of clean spring water into waste.#

A Nestlé facility will harm local tourism as well. The Columbia Gorge National Scenic Area receives millions of visits every year from tourists seeking its pristine beauty, clean air and water. The construction of a bottling plant would result in an estimated 200 truck trips a day — impacting air quality and hampering tourism and other non-industrial commerce in Cascade Locks.

Additionally, Nestlé would tap into the spring that currently feeds Herman Creek, an important thermal refuge for threatened salmon and steelhead. Diverting water away from this site to a bottling facility may lead to changes in water temperature or quality thereby harming an already imperiled population of this Northwest icon.

Water Privatization or Just Another Customer?

The permitting process is being handled in such a way that Nestlé will not obtain legal rights to any water, allowing project supporters to claim that the corporation would not be privatizing water and instead would purchase the water from the city of Cascade Locks, as if it was a municipal customer. However the fact remains that Nestlé is a multinational corporation attempting to bottle millions of gallons of public water with the intent of selling it back to the public for an enormous mark up, 1,500% the cost of tap water.

Nestlé is hardly a typical water customer. Yet by keeping the official water rights in the hands of the city, Nestlé can keep their hands clean and place accountability for any environmental consequences on the city of Cascade Locks.

Nestlé has a history of avoiding accountability for human rights violations across the globe, including notorious incidents of union busting in Colombia# and child labor in the Ivory Coast.# Earlier this month Nestlé UK was found guilty and fined after its failure to implement basic safety protocol in its Albion Mill factory caused the death of an employee.#

Not only is this beverage giant responsible for negligence resulting in harm to human life, but it may be buying its way into politics as well. According to SourceWatch, Nestlé is a member of the American Legislative Exchange Council (ALEC), a group responsible for crafting model legislation that favors corporate interests. Although the shadowy nature of this powerful corporate interest group makes membership difficult to verify, Nestlé, like all other corporations, may use ALEC as a tool to encourage legislation that weakens health, safety and environmental regulations while strengthening its bottom line.

Nestlé’s water bottling sector, called Nestlé Waters, currently bottles water under fifteen different brand names, mostly from locations in North America. Nestlé Water’s track record has shown that it will not make a good neighbor. Communities in Maine, Michigan, and northern California have all spoken out against bottling proposals for their towns, and over 10,000 Oregonians so far have made comments in opposition to the Cascade Locks’ proposal. It is clear that Nestlé is not acting with the public interest in mind, and rather is looking to establish a plant in the Gorge to obtain private profit off of a public resource.

Bark and Food & Water Watch filed administrative protests earlier this week thanks to the support of Crag Law Center, a Portland-based, public-interest focused non-profit law firm. These protests challenge the Oregon Water Resources Department’s approval of these two preliminary permits and the process of resolving them may take anywhere between two to five months. Until this protest is resolved, no subsequent water transfer permits can be issued. Bark intends to oppose this project at every step. In the meantime the public can put pressure on Governor Kitzhaber. We are asking him to make the right decision and ask the Oregon Department of Fish and Wildlife to withdraw its OWRD application T 11109 and direct the Water Resources Department to reject any subsequent water transfer applications that pertain to Nestlé’s bottling proposal.

Join Bark April 8th on a hike in the Gorge to visit Oxbow Spring and learn more. Details on the hike and more information about Nestlé’s proposed bottling plant can be found on Bark’s website, www.bark-out.org.

Meredith Cocks is a grassroots organizer for Bark.

4 comments for “Nestlé Grabs at Public Water in the Gorge”