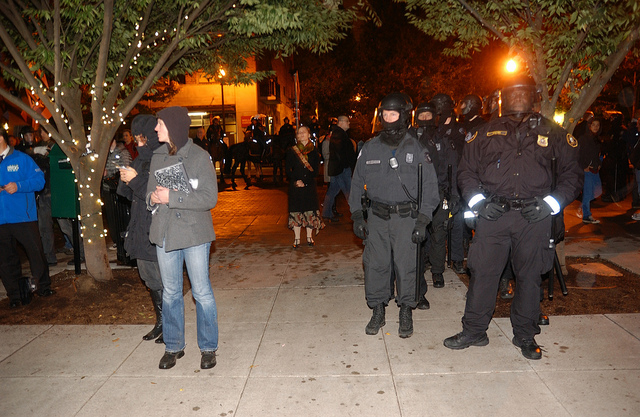 October 30, 2011. It’s a night I will never forget. I was sitting in Ringler’s Annex, in SW Portland, with my date. We were sipping our drinks, engaging in chit-chat, when I glanced at the TV in the corner and noticed that Occupy Portland was on the evening news.

Occupiers were asserting their right to peaceful assembly in a public space. And the police, with more concern for the chain of command than for the law, were preparing to assault them for it.

I couldn’t hear what the corporate media news reporter was saying, so it took a few minutes for me to discern what was happening. Then, an officer touched her, and clearly told her she had to move. Now. She moved quickly, in compliance, appearing to be quite intimidated.

Something inside me snapped.

Up until then, I had been a supportive observer. I took part in the initial march on October 6th, which I filmed for no other reason than my innate need to film things. I had wandered through the camp from time to time, taking photos and sharing them with my friends around the world. I felt it important to counter the fictional corporate media narrative regarding Occupy, but I had never considered myself an “Occupier” per se. To be honest, I didn’t yet fully understand what I saw at the camp, and I didn’t know anyone involved with the movement. I was looking in, from the outside.

That was about to change.

A sense of righteous indignation swelled within me. This is not right. I knew it with every fiber of my being. I made a choice, not knowing where it would lead.

I asked my date if she would hold onto my book bag for me until the next day. I apologized, and said I felt I had to go and bear witness. And I left.

As I approached Jamison Square, I saw the largest row of police vehicles I had ever seen – so far. I saw police on horseback. I saw what appeared to be a small army of cops, many wearing helmets and carrying billy-clubs. Some had war faces; breathing heavily, with enraged eyes, ready to crack skulls. One fat cop, with officer’s stripes, couldn’t control his laughter. This was a very intimidating sight to me, at the time.

“You aren’t really going to do this, are you?” I asked one cop, as he exited his vehicle. “Do what?” he stupidly replied. “This,” I answered. “I don’t know what you’re talking about,” he evaded. “You know exactly what I’m talking about,” I insisted. He walked away.

A passerby asked me what was going on. I told him, “The police are about to assault a peaceful Occupy protest.” The passerby was alarmed, enraged, and confused. I knew exactly how he felt.

I also saw a crowd of people, as peaceful as they were outraged, creating a outer ring around the circle of cops. And at the very middle of these concentric circles, like the proverbial bulls-eye, was a group of people committing the most heinous crime in 21st century America: sitting in a public park, after the hours posted on a sign.

“These people are out here for your pension, too!” I called out to one cop. He shrugged. “Congress shall make no law regarding peaceful assembly!” He shrugged again.

Over the next few hours, what I saw filled with me alternating waves of intense rage and abject sadness. I had never been the kind of man to chant, but tonight, I chanted with the crowd. I even found myself leading one or two chants.

“There’s no riot here, except the one you brought with you!” I called out to a large, burly cop. He flared his eyes, in a menacing look.

Most of the police couldn’t even look at us, as we tried to engage them as human beings. Many of them simply looked at the ground. We appeared to have one thing in common, these certain police & protesters: we were ashamed of their actions.

The cops bullied the peaceful sit-in, handcuffing people and flopping them face-first into the ground like rag dolls. You could feel the rage swelling from the crowd. One thing is certain: those police thugs were lucky that Occupy is non-violent. Damned lucky.

Each time the police van would leave, it would pummel a new path through the crowd, driving right at human beings, so that they could carry the kidnapped back to the jailhouse. The horses pinned a woman at one point, injuring her for absolutely no reason; her shrieking haunted me. This happened right in front of the corporate news media vans, in full view of their cameras. They would later tell the public that the night was “non-violent.” It’s only violent, apparently, when the bullied fight back.

After the jack-booted thugs were finished with their depraved task, a curious thing happened. Before the cops had even left the park, people began to step forward. I noticed that the people were getting closer. They weren’t walking towards me… rather, I was getting closer to them. Somehow, without me even telling my feet to do so, I found myself taking one step after another, into the center of the park. I felt something inside my chest; an indescribable feeling that I have never before experienced.

I think I had just made the first truly free choice of my life.

I stepped to the center of the park. Other Occupiers did so as well, picking up the protest signs of their abducted comrades. Without a word, we all understood what we were doing. I climbed the separating wall, and stood there, because I believed it was important that anyone driving by see one simple truth: we were still there.

In a state of muted shock, I stood there, on the wall, in the rain, for the next three or four hours.

The police returned a couple of times, driving around slowly; menacingly. They made no more arrests, however. And I, and my new friends, remained where we were until the early hours of the morning, when the park officially “re-opened.” Despite their brutality, despite their inhumanity, despite their blind obedience to authority, the city government’s exercise of sheer force failed. That night, despite whatever the corporate media propaganda might have said, Jamison Park never ceased to be occupied. Not for one single minute.

I got my book bag back the next day. And got dumped. Hey, all choices have consequences. I have no regrets.

In the coming weeks, I got more involved, taking footage of actions & uploading it to my YouTube channel. What I saw changed me. The eviction, when 10,000 people stood in opposition to Mayor Sam’s assault on First Amendment rights. N17, when I & those around me had our first taste of pepper spray for the crime of standing on a public sidewalk. The anti-NDAA protests that Portland Police harassed & assaulted with glee. And on and on. The people I shared this footage with were horrified at the para-military brutality of the Portland Police Army. One question was common among all of those who watched: why am I not hearing anything about this in the news?

On Christmas day, I went to the City Hall vigil, with three pizzas. (Sorry, folks, about over-cooking the third one!) A member of the Livestream team noticed me, with my iPad (as always) in hand. She recruited me. My life was about to change in a very real and fundamental way.

Life often happens based on split-second decisions, feelings, and gut instincts. The wordy justifications come later. I could give you a philosophical treatise as an answer to “why I occupy.” I could list bullet points about social and political injustice. I could make graphs that prove that the world is upside-down.

The truth is, I occupy because, while I was sipping my beer, I watched the Portland Police push a journalist away while she was covering a story. I watched the Portland Police order a journalist about, telling her where she could stand, and where she could point her camera. Though I may not have realized it yet, by the time I reached Jamison Square, I was already an Occupier, because I know one thing: the press is supposed to be autonomous from political authority. The press is not supposed to be restricted to an Orwellian “First Amendment zone.”

I occupy because my sacrosanct, supposedly-guaranteed First Amendment rights simply are not honored by the powers-that-be. And these rights are not “rights” because of government recognition, or even because they are written in the Constitution. The Constitution simply recognizes them (at least on paper). These rights exist because they are like my eyes, or my ears; I was born with them.

I occupy in order to assert my rights. As a member of the OPDXLive.org Livestream team, I engage in the radical activism of replacing the corporate propaganda media with 24-hour unedited truth – warts, beauty, and all. I feel truly lucky, to exist in the right place and time to help provide the coverage that has propelled the Occupy movement into a global phenomenon, with an unprecedented global media network. Never before has a movement for social change wielded this power. Never before has a movement had the capacity to be so inclusive, to so many.

No matter the tyranny that tries to silence the truth – an authoritarian government, a lawless chain of command, or even a consensus body that has forgotten that some rights are not left up to a vote – I occupy because the revolution that I am a part of, is the true story of what was. 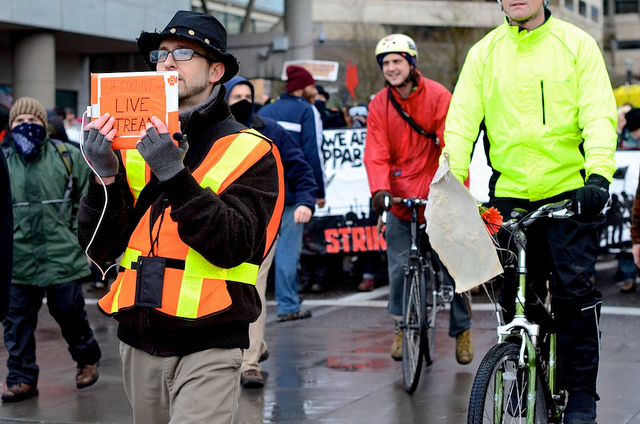 4 comments for “Why I Occupy – Jess Hadden”