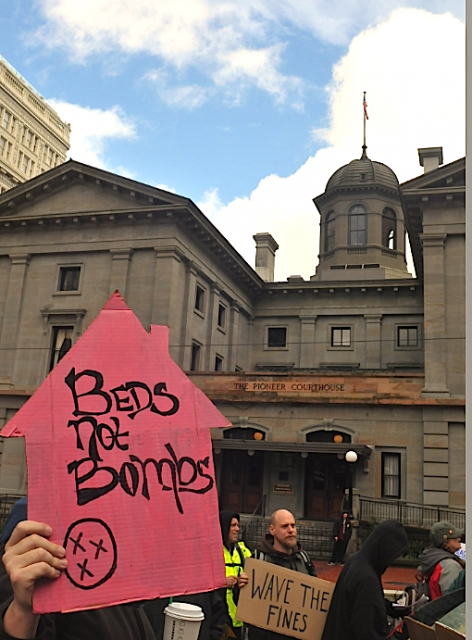 Approximately 60 people gathered at Pioneer Courthouse Square Sunday afternoon as part of a national day of action calling attention to civil rights violations directed against people without housing. Against the backdrop of “Portland’s Living Room”, where members of the public are harassed for sleeping and engaging in other aspects of living, people from Right 2 Dream Too and Dignity Village, as well as other people without housing spoke out against the growing criminalization of houselessness and poverty.

In a survey of 716 houseless people across eight cities in the United States, at least three-fourths of correspondents stated police targeted them for sleeping, loitering or hanging out, and sitting or lying down. For each of these “violations”, approximately 20 percent of “violators” were arrested. In addition, 74 percent of “violators” said police harassed them without using any law, while 71 percent said private security harassed them.

Chris Ellingson, an organizer with Right 2 Dream Too, emphasized the importance of fighting the various “sit and lie”, “quality of life”, and “nuisance” laws clearly aimed at the houseless community while at the same time pushing for the Portland City Council to provide more space for shelter. “There are many vacant buildings downtown. Move us into one. Bring us into a vacant building for free. We would run it on our own just as we do Right 2 Dream Too.”

Right 2 Dream Too, established on October 10, 2011 and located on the corner of West Burnside and 4th, provides shelter for 40 people a night. Mama Chewi, also an organizer with Right 2 Dream Too, emphasized that the community also supplies blankets and food, and it does not discriminate. All couples and people with pets, for example, are welcome.

Despite Right 2 Dream Too not being a campsite in the usual understanding of the word, the City of Portland is currently fining Right 2 Dream Too for not complying with recreational campground ordinances. The Portland Bureau of Development Services has stated the Right 2 Dream Too rest space lacks proper permits and must be subject to routine inspections.

Mama Chewi noted the irony of the fines as Right 2 Dream Too costs nothing to taxpayers. The services provided, including policing which they do for themselves, are performed through donations and the work of community members. “We are a community within the community. We help each other, and helping each other gives us self-worth.” 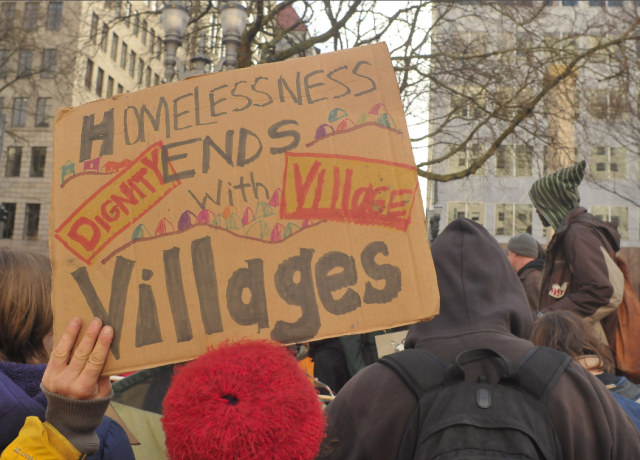