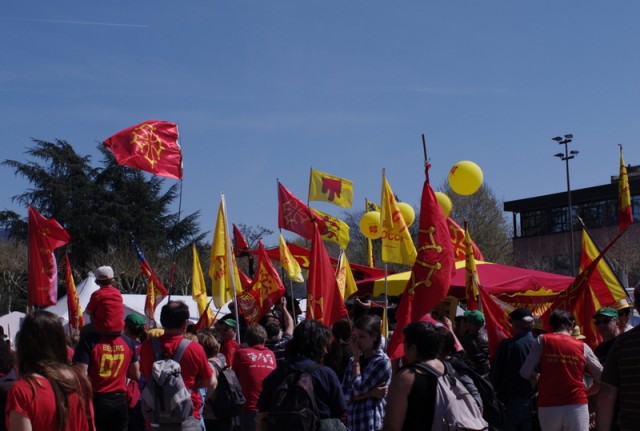 On a hot spring day, the last day of March, up to 50,000 people both young and old, danced and sang their way through Toulouse to the music of traditional instruments like the cabra or cornemuse, bagpipes made from goat skins, pipes, and drums. They had come from towns in southern France, Limotges (Limoges), Besièrs (Béziers), Sarlat, from villages in Provence, from Barcelona, from Wales, from Niger in west Africa…. In a river of red and gold flags and lively music they were reclaiming the streets of this traditional capital of Occitania. Occitan is the indigenous language of much of southern France, which goes back to the troubadours of the eleventh and twelfth centuries and is spoken in communities covering an area from the Italian Alps to the Catalan Pyrenees. The Val d’Aran in Catalunya is the only place where Occitan is an official language. In most of Occitania the centralised policies and political attitudes of the French state have made it difficult for people to live their lives and celebrate their distinctive culture in their own language. This was a day of protests all over France in favour of minorities that have been suppressed by the Republic, including Breton, Basque, Catalan and Corsican. The Nouveau Parti Anticapitaliste (New Anti-capitalist Party), whose members were on the march, said that we must “defend and promote regional languages and cultures with an anti-capitalist, anti-productivist, democratic and internationalist campaign.”

In the absence of any official support for these languages and often in the face of legal prohibition and discouragement, people in these marginalised areas of France have taken matters into their own hands. Friends of my generation were politicised during the 1970s during campaigns to save the Larzac plateau from government plans to extend a military base there, which would have damaged traditional sheep farming in this wild area of moorland. There is a strong environmental, pro-peasant farming and anti-capitalist element to the thinking of this movement, and recognition that this region of what is now France has always been a crossroads for peoples and ideas – Celts, Romans, Arabs among them. And their children, the new generation, have carried on the campaigns by educating their children outside the monolingual French state system, running calendretas, Occitan primary schools. Here children are taught not only the language but the culture too, and to appreciate of diverse cultures, to question the received wisdom that some civilisations are superior to others, an inclusive move that challenges the Republic’s interpretation of the ideal of ‘equality’ as ‘sameness’. All these people were here today, the parents and supporters of the schools providing the food stalls where we gathered for the march, their children joining in the demonstration, singing, playing, dressing up in wonderful costumes, giving us all hope for the future of Occitania. There is much work to be done by the huge variety of groups committed in different ways and with different approaches to furthering the cause but this day was for celebrating together.

2 comments for “50,000 March in Support of Indigenous Culture in Southern France”