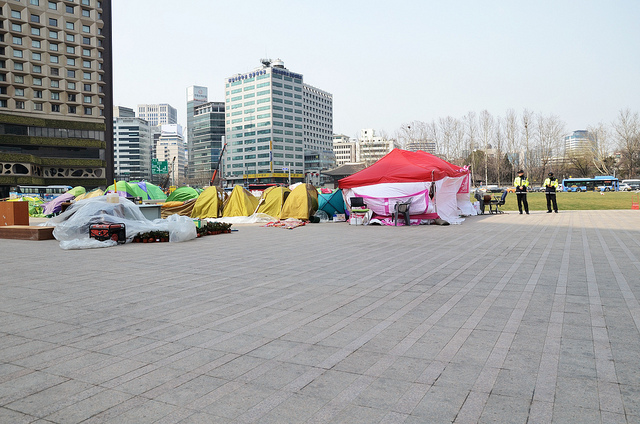 On my first day in South Korea while wandering around Seoul looking for any sign of activism (which tends to be what I do when I travel!) I came across what I can only assume is Occupy South Korea. I couldn’t be sure as there was no one around to ask but two police officers who motioned for me not to take photos. I saw a handful of tents that appeared as if they were being used, but no one was in them. I was able to casually snap a few pictures, but when I asked if I could read the sign that described their struggle and the struggle of the 99% in Korea, one of the officers made a gesture to put my camera away. I told him I just wanted to read the sign and he let me get a peek. Unfortunately, the sign was obscured behind a chair and I dared not move it. I then continued to casually wander around the area trying to see if anyone would emerge from a tent, but no one did, so I continued on my way.

Occupy South Korea seemed to be a ghost encampment, which was almost stranger than no encampment at all. Was everyone at work? Was the camp evicted and the tents being held (in their place) as evidence? Was it a symbolic camp? Unfortunately, I was not going to find out.

Earlier in the day the woman who was working at the front desk of my guesthouse indicated that she studied environmental science, so I felt comfortable asking her if there was any local activism going on, to which she replied, “yes, but freedom of speech is severely restricted here.” She said that there are often small protests around the city, but they are quickly stopped.

So, now I have more questions than answers, but ultimately seeing a grouping of tents (even empty ones) holding space in public, brought me an amazing amount of comfort and excitement and made me feel at home. I just hope that the South Koreans, like the rest of the activists in the world working within this movement, are able to keep moving forward in the face of an incredible uphill battle and find comfort and hope in knowing they are not alone.