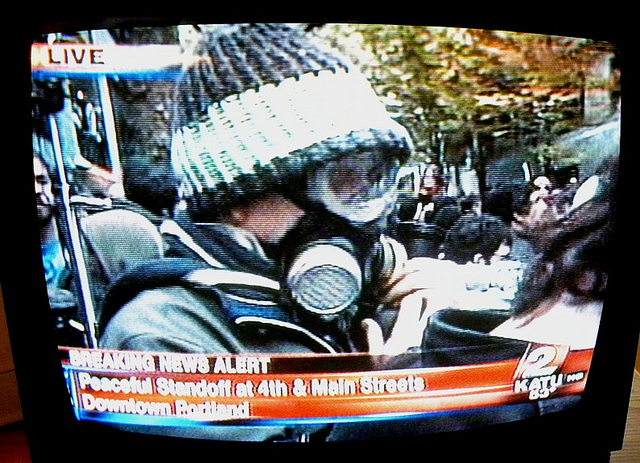 At a recent Portland General Assembly, some of us had concerns about how a proposed action might be perceived by the general public. One person countered with (paraphrased) “If we don’t act on something because we’re afraid of how the public will view it, we’re going against everything we believe in.”

If all we are is a small group of dedicated radicals, that’s a great statement. My response was, “We’re representing the 99%. If we’re going against what they believe in or can’t satisfactorily explain our actions to them, this is going to be our movement.” With a sweeping motion, I indicated the twenty-five or thirty of us in attendance at that GA, a larger group than usually attends.

I’ve often said that the anarchists, or whatever other label we wish to use, are our front line soldiers and are essential to the movement, but Occupy Portland is looking more and more like an anarchist movement and less like one standing up for the 99%. Because they are the activists, they show up at the meetings, and it’s their voices we hear. While I agree with most of their goals, I don’t agree that they are necessarily representing the 99%.

I joined Occupy because Occupy Wall Street was protesting against Wall Street, which ruined the world’s economies and stole our money and our future without any of those responsible going to jail. I was all for going after them with torches and pitchforks three years ago. I was also for the movement because it seemed to stand up for the 99% and for the oppressed everywhere, noble goals in my opinion. This was never about camping out in city parks as far as I was concerned, although I loved Occupy having a public presence. I was there for the march on October 6th, and I’ve been there for most marches since then.

I wrote an article a while back questioning the authority of the GA to make decisions for Occupy. Since then, I have actively participated in GA meetings, missing only one since. I don’t question the dedication of those that facilitate or attend the GA. At least those twenty-five or so people are willing to stand in the cold to make decisions for Occupy, and others are now able to participate through LiveStream, although, so far, few people have participated that way. Anyway, I’ll give them the right to speak for Occupy. If others want their voices heard, they can come down and stand in the cold or participate online.

I wish I had some answers; I don’t. All I have are questions.