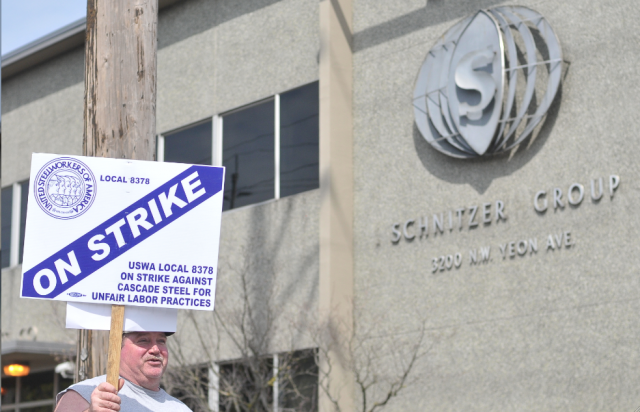 A crowd of 15 striking steelworkers gathered outside the offices of Schnitzer Steel in Portland on Monday morning, April 9. Schnitzer is the parent company of Cascade Steel Rolling Mills, located in McMinnville, OR, where over 300 unionized members of Steelworkers Local 8378, went on strike Sunday, April 8th–one week after their union contract expired.

As strikers marched in both Portland and McMinnville, negotiators for the workers and the mill met with a federal mediator. While the steel workers went without a raise last year, Schnitzer Steel saw an increase in both production and profits. The workers are  are incensed at Schnitzer’s unwillingness to fairly share the wealth. Among the points of contention are management’s demands that workers pay more for health insurance, work longer shifts, and have less rights to union representation while being disciplined.

Local 8378 has also filed charges against Schnitzer Steel with the National Labor Relations Board, accusing the company of bad faith bargaining.

1 comment for “Striking Workers Steeled for Fight Against Schnitzer”