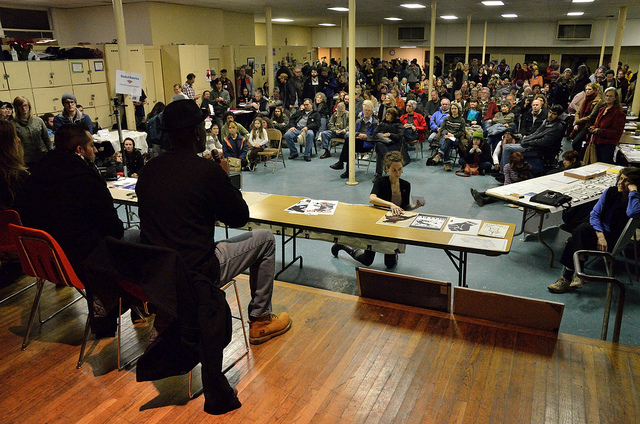 Portland, Oregon, is a city so packed with progressive activists that the two Bush presidents angrily dubbed it “Little Beirut”, because whenever they dared to drop in they were targeted by hundreds of vociferous protesters from many organizations.

Issues that drew dissident ire included: the Iraq war, single-payer health insurance, impeaching G. W. Bush and Vice President Cheney. The tradition has continued, but solidified under one principal tent in Occupy Portland (OP) after the Occupation was evicted from the encampment at Chapman and Lownsdale Squares. Full of creative ideas and talent, with an age span of teens to seventy-somethings, at last count Occupy Portland had ninety-seven public committees with membership ranging from a handful, to ninety-one people.

These committees have been busy all winter with an early delivery of the American Spring, which activist Kevin Zeese wrote about recently in the online Countercurrents publication. Zeese, executive director of Voters for Peace, noted in his recent national tour of Occupy groups that real action was: “just getting started. [Occupy] is escalating its activities, building its skills and the best days of the movement to end the rule of the 1% are ahead of us.”

OP’s central headquarters in an east side Catholic parish hall hosts committee and spokes council meetings for substantive actions on the 99%’s critical and basic issues: unemployment, foreclosures, healthcare, and bank fraud, as well as helping unions survive the corporatists’ unending efforts to snuff them out. All of this is heartening to serious Occupiers who’ve feared the 99%’s growing—if dead wrong—perception of the movement as largely a cop-baiting, window-breaking mob of exhibitionists (aka: “performance art”)—thanks to mainstream media’s constant hunt to show violence.

Regular rallies/marches and “occupying” key institutions do show the public that Occupy is alive. But its wellness and health is shown in agendas of Spokes Councils and General Assembly meetings. They reveal that Occupiers are heavily involved in public projects, using countless hours and elbow grease addressing the basic and critical needs of the 99%—especially the voiceless poor and low-information people.

One of OP’s Labor Solidarity committee members, Shamus Cooke, warned in a recent Occupier article that the movement’s national survival depends on moving “beyond symbolism and education to building power.” As he put it, Occupiers must be willing to do the down-and-dirty work to “reflect what most working people view as their most important issues…so that the 99% can directly relate to them and thus be drawn into [Occupy’s] struggle.” Portland Occupiers are doing just that.

For example, the Portland Action Lab committee originated last month’s national “Shut Down the Corporations” campaign and educated millions of high and low-information types about the stranglehold business monopolies such as Walmart and Bank of America have on most consumers, thanks to the buy-offs of many legislators and members of Congress by ALEC (the American Legislative Exchange Council). The Labor Solidarity committee helped shut down West Coast ports and was instrumental in helping a Longview Washington Longshoreman’s local recover its dock jurisdiction.

North Portland Occupiers in early December physically blocked an eviction. They were joined by others at a house auction on the Multnomah County courthouse steps to urge prospective buyers not to bid on one foreclosed home. The Environment committee’s 48 members are centered on educating the public about climate change’s “impact on water, food, and energy use.” OP’s Food and Garden Club has sixty-four members involved in weekend farming of sustenance food for Portland’s hungry on fifteen city sites donated thus far by locals.

The thirty-eight members of the Anti-Corporate Personhood committee’s are focused on actions reversing the effects of the U.S. Supreme Court’s Citizens United decision. Several OP members joined forces with other Occupy groups from around the state in late March to lobby and do teach-ins about campaign finance reform, tax and budget fairness to the 99%. They also were among two witness groups in Legislative committee hearings to testify against a proposed bill criminalizing electronic protest messages (the bill died in committee).

As for OP’s Healthcare committees, they moved from providing free care in the Occupy camp to all comers, especially the houseless, to staging a health fair. Currently, their emphasis is on establishing a single-payer healthcare insurance system in Oregon. This has not been lost on the army of Oregon’s outspoken, tireless, and energetic single-payer advocates. OPers were part of their mid-November rally and march, and will be vigorous supporters of a single-payer bill in the next legislative session.

One of OP’s busiest and highly visible spokes is the 32-member Labor Solidarity Committee. One heavy outreach effort is the People’s Assembly drawn from Portland’s more than 90 neighborhood associations. Its main thrust is on countering the city’s pro-business budgetary priorities with a counter budget constructed from association input, as well as researching the budget requests of city departments, and weighing most Portlanders’ needs—especially those below the poverty line.

The committee will lead a caravan of Occupiers to the Hanford Nuclear Reservation in mid-April to protest the slow pace and low-funding of waste clean-up, They’ll emphasize the health and safety dangers to workers and residents of the Columbia river basin. Plans are also afoot to deal with another company intending to send multiple daily coal trains—including the dust—from Montana through the Columbia Gorge to off-load contents at river ports for export to China. But most other Labor committee action is for the working-class, particularly unions.

Right after the resolution of the ILWU Longview strike, the Labor committee members plunged into a host of rallies/marches: Letter Carriers Branch 82 on the proposed draconian U.S. Postal Service cuts; Laborers’ Local 483’s protests about major cuts to Portland’s parks/recreation department; SEIU Local 49’s action against Legacy hospitals’ plans to downsize 400 front-line staffers. And early this month, members were demonstrating in Pioneer Square on behalf of Tri-Met employees and passengers against budget/service cuts and orders that fare inspectors check 35 passengers per hour for passes/transfers and issue at least four no-excuse $175 citations to the fareless. Longview’s success triggered calls for help at a clip of two to three per week from rank-and-file members of Portland-area unions and labor groups—Iron Workers to East County Educators and Tri-Met employees. Fearful of retaliation in today’s downsizing climate, rank-and-file union workers view Occupy as their best public voice to air serious grievances. To meet such growing demand for rapid assistance, the Labor committee just established the “Flying Picket” team.

OP’s participation in November’s national Bank Transfer Day campaigns drove hundreds of Oregonians to start shifting accounts from national banks to credit unions or community banks. Oregon eighty credit unions (with a collective $15,600,000,000 in assets) reported that up to December, 10,700 joined their membership. Federal law currently caps CU business loans to 12.5% of assets, though a new bill in Congress proposes raising it to 27.5%. Even without that cap, some 650,000 loans have been added since September 29 to the 92,000,000 members of the nation’s 8,500 CUs. 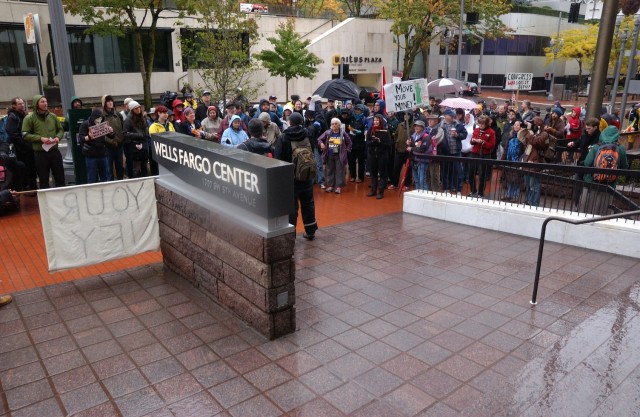 Perhaps even more important down the road has been OP’s resolution (co-authored with a dozen activist groups) to Portland’s City Council urging the shift of city money to Oregon credit unions and community banks. It convinced Mayor Sam Adams to suggest starting by moving a token amount ($250,000) to those entities. OP’s Solutions committee perceives that action as a first step leading to a Portland Municipal Bank. (Oregon’s constitution specifically bars state banks.)

An upcoming action will confront Oregon’s growing long-term unemployment problem, in an April 15 afternoon assembly earmarked for the jobless from East County and eastern Clackamas county areas. The Labor committee may be the first in the nation’s Occupy movement to try something new for Oregon’s portion of the estimated 1,100,000-5,000,000 “long-termers”—especially those aged 40-60. They are largely untraceable, and therefore mostly invisible to the U.S. Bureau of Labor and the public, but not to 40% of families who relied on one breadwinner. The idea of never working again, plus income loss, in a culture venerating and demanding work and purpose, can drive people to suicidal depression. Most tend to isolate. Millions are counted, of course, in statistics concerning domestic violence, alcoholism/drug addition, assaults, or murders.

Aided by experts in lobbying and party organization, OP’s unemployment assembly will serve as a catalyst for participants organizing into two avenues of action to spur public-works jobs: demanding Portland Mayor Adams and Governor Kitzhaber institute public-works programs similar to the Great Depression’s WPA (Works Progress Administration); or to do the same by forming a Labor party resembling either Britain’s Labor Party or Minnesota’s legendary and still dominant Farmer-Labor Party of the Depression era. In Minnesota, the Farmer-Labor party’s heavy bloc of unemployed members (families/friends) swept most Democrats from the legislature, elected a governorship and part of the Congressional delegation. The new Governor used charisma and threats (“rampant lawlessness and possible revolution”) on a tight-fisted legislature and Executive Orders to pry millions for unemployment relief, and a two-year moratorium on farm foreclosures.

A third route might be if participants decide to revive the powerful Unemployed Councils/Unemployed Leagues of the Great Depression. Members stormed city halls by the thousands to pound on the tables for food, shelter, clothing, unemployment funds, and public-works jobs. They succeeded for the most part. Street demonstrations by thousands in major cities were not unusual (100,000 in New York City). In late 1931, some 400 of Portland’s 3,000-member Unemployed Council wrested shelter for 1,000 from City Hall—and, later, other basic needs.

Public works jobs are visible here and around the state. Prisoners are being used to for grass-cutting chores along Portland’s streets and in parks. The Oregonian just revealed that the state has only thirty-one federally-certified housing counselors—100 cases each per year—to process 42,000 delinquent or in-foreclosure home loans. Infrastructure jobs in Eastern Oregon have also been given to out-of-state construction workers, when unemployment last year in Crook county was 17.1%. Locals could learn skills on the job, as did WPA workers in the 1930s.

Heavy lobbying of politicians by the long-term jobless could provide serious political clout. There is a possibility of millions of people from from both parties refusing to vote in November out of disgust or fury at their governmental and presidential actions or inaction. This should force incumbents and candidates to change gears out of desperate fear they won’t get elected or re-elected—even with unlimited campaign funding. Occupiers know millions of the 99% have left the two main parties and yearn for one that not only responds to their needs, but also can’t be bought by the 1%.

TIME magazine warned political leaders in February that the invisible long-term unemployed could determine federal/state/city elections and the economy and stock market: “The November elections will likely be decided by swing states that have lots of underemployed and discouraged workers“, such as those in Pennsylvania, Ohio, Florida, Georgia, North Carolina, and Nevada. By election time, the 99% may well recognize and concede that the Occupy movement has done yeoman’s work to begin helping them obtain major needs. The President and other elected officials—and the major parties—have given them only lip service. And if elected, will keep doing the same.

These are only some of the possibilities that the warming weather holds for Occupy Portland. Shamus Cooke told Occupiers: “Engaging these broader layers of people in a concrete struggle is crucially important because it creates solidarity among participants, gives strong meaning to the movement, is a beacon for those who relate to the struggle and thus pulls them into the fight, and clearly defines the goals of the movement…” He’s dead right. Hopefully, most of the 99% will join Occupy’s vanguard of hard-working, imaginative change agents. After all, the choice boils down to either sit and stew, or begin their lives anew. Whatever they decide, the movement will be there in the form of thousands of groups like Little Beirut’s vigorous band of Occupiers. 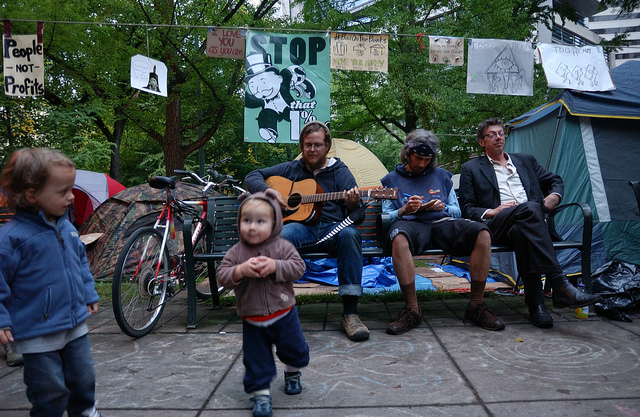