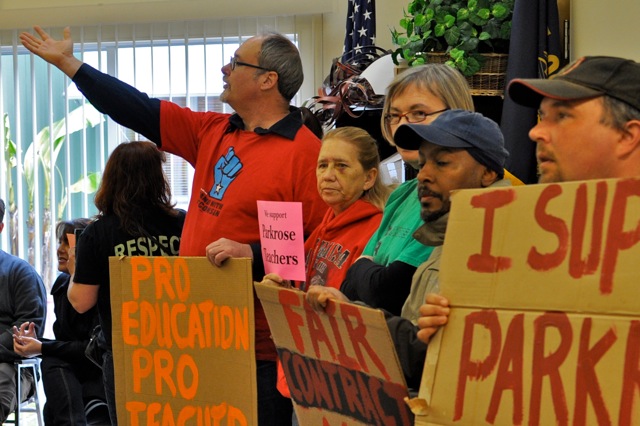 By Meredith Reese, with reporting by K. Kendall

“Shame on you!” demonstrators chanted, as the Parkrose School District, led by Superintendent Karen Fischer Gray, said NO to teachers. A supportive community of some fifty people, including representatives of Occupy Portland and Jobs With Justice, expressed support for teachers who say they will strike as a result of this vote.

The emergency meeting, held at 8:45 a.m. when most teachers and community members could not attend, ended with unanimous board support for implementing their contract, which will include paycheck deductions of up to $1000 on the teachers’ next paychecks in order to balance their budget.

Education cuts have hit Parkrose for years, long before the 2008 economic crisis, with much of the burden placed on staff by increasing the number of students in classes, decreasing preparatory time, reducing compensation, and revoking teachers’ rights on the job. Teachers at nearby Gresham-Barlow school district have already voted to strike while an impasse in negotiations at Reynolds school district might lead to a strike in May. Over 1,000 teachers work in the three school districts in Multnomah County.

Parents who attended worried about whether their children would be able to advance to the next grade in the case of a teachers’ strike, but they were unflinching in their support for teachers and were shocked to learn how much money the district would be taking from teachers’ paychecks. Some teachers have expressed concern that they will be unable to pay their mortgages this month, in an area where foreclosures have increased 12% from last year.

A community group, Defend Our Teachers, is supporting the teachers at all three school districts. Plans are underway to hold flyering runs, teach-ins, child care, and picket support in the event that the teachers at Parkrose and Gresham-Barlow go on strike on April 25th. Email [email protected] to get involved or share your story.

3 comments for ““Shame!” on Parkrose School Board”