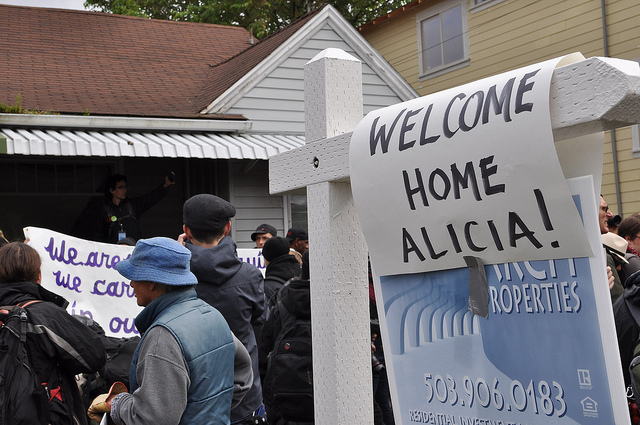 Alicia Jackson has come home. Banksters stole her home and intimidated her into leaving it voluntarily, but she’s fighting the process. With the support of her community, she has decided to remain in residence while her case makes its way through the bureaucracy. The full background of Alicia Jackson’s re-occupation of her home is spelled out by We Are Oregon and the Portland Liberation Organizing Council (PLOC),but Jackson said on May Day that she gained the courage to take this action from her community. “And this is not going to be the last property we liberate.”

On a day when many actions took place in Portland, most involving violent law enforcement officials, this well-planned and smoothly-executed action succeeded in part because organizers insured that the action would be a “police-free zone.” Planners achieved this by several means. First, a police liaison worked to inform police of plans and to negotiate for police to serve as street escorts only. Second, by plan or by coincidence, the marchers in the front (near the police car) kept going forward, while Alicia Jackson and the rest of the march made a right turn and headed directly for her property, thereby leaving the police escort isolated on a main thoroughfare until the community had taken over the property. Third, Black Bloc tactics were used to blockade the entire block where Alicia Jackson lives. Reinforced banners held by multiple marchers were used for the blockade. 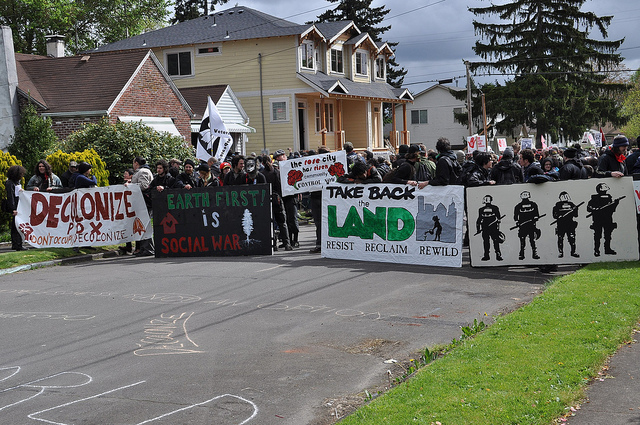 While a few uniformed police officers were present at Woodlawn Park, none entered the block where Alicia Jackson’s house is located. They were effectively excluded, and because of that, no violence took place.

Other aspects of this action showed meticulous planning.  A coalition of groups including ONE: the Black Working Group, PLOC, and We Are Oregon executed a multi-stage, carefully orchestrated plan that included the following:

–a rally for about four hundred people in Woodlawn Park, with adequate sound
–a march from Woodlawn to Alicia’s home, with drummers, bike swarm, and Black bloc
–a key to the door of Alicia’s home presented to her on the spot
–rituals of reclamation, including tape-cutting and libation, an African custom of offering thanks to the ancestors and soliciting their support
–a moving van with all Alicia’s possessions
–labor to move her belongings back into her home
–trees, seedlings, and gardening equipment delivered to her yard
–labor to clear weeds and brambles from her front and back gardens
–planning and planting of a garden by people who are expert gardeners
–labor to clean out the house, unpack Alicia’s belongings, and collect rubbish
–food and water for the crowd and the block party.

Neighbors expressed solidarity. Many had “We Support Our Neighbors” lawn signs visible. Some brought flowers. Others brought food. A few told me it was their first time to meet “Occupiers,” and they were surprised and pleased to see how hard Occupiers worked in the yard and in the house. The community where Alicia lives was included in the planning, and they shared the enthusiasm of the crowd. This was crucial: It was not a crowd that came in to tell the neighborhood what to do, but a crowd that answered the plea of a neighborhood to support it in restoring one of their own to her rightful home. 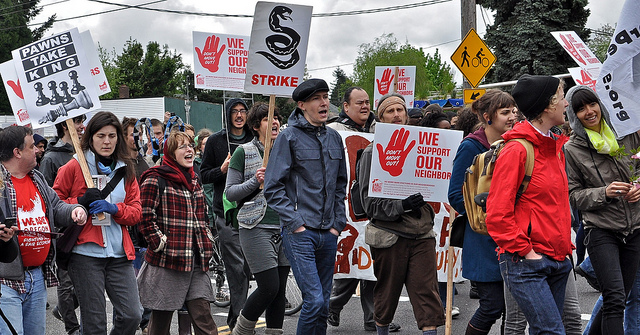 When Alicia entered her house, Ahjamu Umi said through the loud speaker, “Alicia Jackson has come home.” People hugged each other. Many in the crowd wept, remembering their own evictions or those of their parents or grandparents. A person with a mask over his face shouted out, “She’s doing it for all of us.” A few carried signs saying, “Our House.” In an action meticulously planned right down to the fruit tree and the basil seedlings, the hoes and the shovels, the barricades and the banners, Occupy Portland also came home.

4 comments for “M1: Police-Free Zone: What Peace Looks Like”