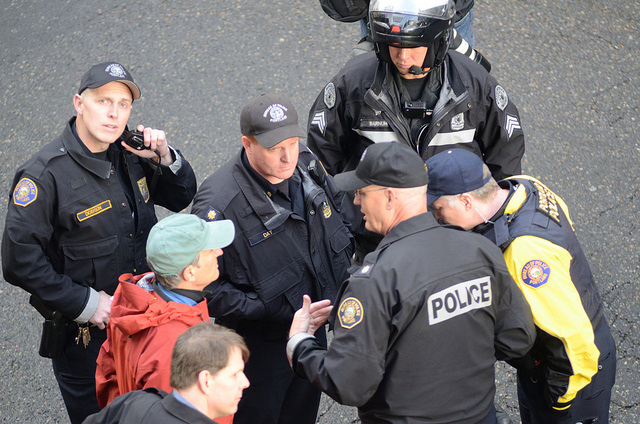 I am getting tired of hearing Lt. King and others from the PPB speak about “the tone of occupy has shifted” (OPB’s Think Out Loud May 1) which is what you have said time and again prior to any protest that you plan on having riot police showing up to, or have an aggressive response to an action.

Because one or two people may show aggressive verbiage at a Portland Police Officer, it is ridiculous to characterize and entire movement as changing its tone, especially when Occupy Portland has been committed to peaceful marches, events and occupations from day one. And Occupy has successfully demonstrated our commitment to peaceful protest.

The only time there have been any incidents of violence at an Occupy event is when the police show up and instigate the violence. People only get hurt when the police hurt them. The outliers of this fact have been few and far between.

I have spoken to this fact in City Hall, and Mayor Adams didn’t have a word to say in response. There was a blank face and barely an acknowledgment of my words.

We have seen an incoherent and inconsistent strategy by the PPB in regards to how they approach and deal with Occupy and affinity groups and we are seeing an ever present sense of more malice and aggression.

After yesterday, it is clear to us that the tone and tenor of the Portland Police has become decidedly violent and aggressive and they are clearly not upholding their civic duty to promote the peace and safety of Portland citizens exercising their Constitutional rights to freedom of speech and assembly.

There’s no explaining the amount of violence and tactics deployed during the May 1 events, but we’re going to demand an explanation regardless. People were pulled off their bikes for no reason. People were slammed into pavement and hit with police bikes. Where in the Police manual is it legitimate to slam a bike into a person from behind for stepping off a sidewalk to help someone that has fallen down? This happened to someone very close to me.

When did it become policy for a Police officer to repeatedly punch a restrained person who is on the street and not resisting? Take a look at this video at around the 19 minute mark.

The next video shows two police brutally wrestling a person to the street, restraining him and then throwing down a woman on top of him and trying to drag the woman by her hair.

The woman was clearly pulled into the situation, and when by PPB policy is it appropriate to pull someone to one side by their hair?

Another great example is the takedown of this peaceful woman. Please explain this series of photos.

What the hell is going on with your department? Where is the leadership and training?

Mayor Adams, Chief Reese and Lt King: If you think it’s acceptable to use violence on people that step off a sidewalk, hold people zip-tied for more than 4 hours for a misdemeanor violation and punch a 15-year-old kid, then you need to explain all of this to the citizenry of Portland.

We are collecting and documenting these events.

This is not Seattle, this is not Oakland. This is Portland, Oregon. The numbers of demonstrators were about the same in each city, yet in our city there were barely any incidents at all and none that warranted the brutal response from the Portland Police.

It is no wonder that the US Department of Justice has an open investigation on the use of force and brutality in the Portland Police Bureau.

As citizens of Portland and of the United States of America, we expect and demand better. And we will hold you accountable.