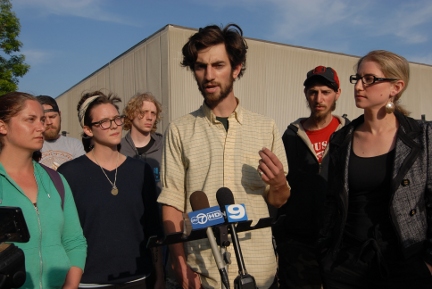 From a press release by the National Lawyers Guild:

Chicago, IL — The National Lawyers Guild (NLG) condemns a preemptive police raid that took place at approximately 11:30pm Wednesday in the Bridgeport neighborhood, and instances of harassment on the street, in which Chicago police are unlawfully detaining, searching, and questioning NATO protesters. The Bridgeport raid was apparently conducted by the Organized Crime Division of the Chicago Police Department and resulted in as many as 8 arrests.

According to witnesses in Bridgeport, police broke down a door to access a 6-unit apartment building near 32nd & Morgan Streets without a search warrant. Police entered an apartment with guns drawn and tackled one of the tenants to the floor in his kitchen. Two tenants were handcuffed for more than 2 hours in their living room while police searched their apartment and a neighboring unit, repeatedly calling one of the tenants a “Commie faggot.” A search warrant produced 4 hours after police broke into the apartment was missing a judge’s signature, according to witnesses. Among items seized by police in the Bridgeport raid were beer-making supplies and at least one cell phone.

Chicago police abducted eight anti-NATO protesters last night after breaking in the door on their Bridgeport apartment just before midnight Wednesday. Police are denying they have the anti-NATO activists in custody, even though attorneys have independently verified the raid with eyewitnesses and confirmed that at least some of the activists are in police custody. Cops reportedly produced a warrant that was blank, and also entered and searched an adjacent apartment in the same building. NLG attorney Sarah Gelsomino described the activists as ‘disappeared.’

“Preemptive raids like this are a hallmark of National Special Security Events,” said Sarah Gelsomino with the NLG and the People’s Law Office. “The Chicago police and other law enforcement agencies should be aware that this behavior will not be tolerated and will result in real consequences for the city.”

In another incident, 3 plainclothes police officers unlawfully stopped, handcuffed, and searched a NATO protester on Michigan Avenue and Wacker Drive at approximately 2pm today. According to the protester, he did not consent to a search and there was no probable cause to detain him. The police also photographed and questioned him about where he was from, how he got to Chicago, how long it took, what he was doing here, where he was staying, who he was with, and how long he was planning to say in Chicago. The protester refused to answer any questions and was eventually released.

The NLG has received reports that at least 20 people have been arrested so far this week, and two people are still in custody, not including the Bridgeport residents who are still unaccounted for. One of the protesters currently being detained, Danny Johnson of Los Angeles, has been accused of assaulting a police officer during an immigrant rights rally on Tuesday afternoon. However, multiple witnesses on the scene, including an NLG Legal Observer, recorded a version of events that contradict the accusations of police.

It has since been released that 3 of the arrested have been charged with conspiracy to commit terrorism, and other terrorism-related charges, which are called “ridiculous” by the NLG, Occupy Portland Media Coaltion correspondent Mike BH shot this video of an NLG press conference on the matter: