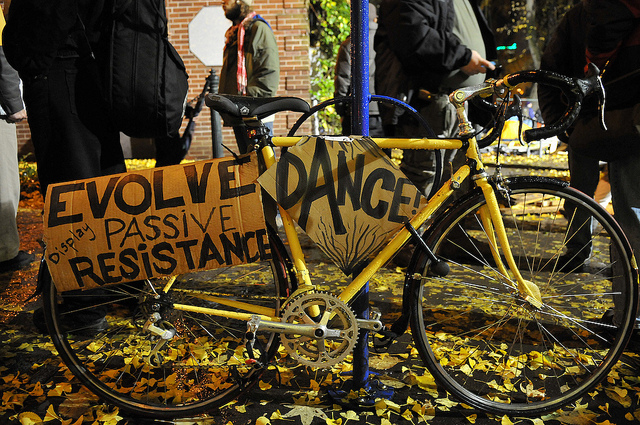 On Thursday, June 7th at 6pm, in the South Park Blocks near Portland State University, the PDX Bike Swarm will lead the Kickoff Ride for Portland’s annual 3+ week long mega-event PEDALPALOOZA, and as in years past the turnout is expected to be well in the hundreds for this ride alone. With over 250 separate, free, individually and group planned rides, Pedalpalooza is world famous for being the pinnacle time and place that all things bicycle are celebrated in our city. Bus loads of travelers come from LA, Seattle, Vancouver, BC, and beyond to take part in the almost month-long series of family friendly and adult-oriented bike rides. Whether you’re a redhead enjoying the Ginger Ride, an anti-freeway activist taking part in the Shut Down the CRC ride, or just a fan of cycling in the nude via the World Naked Bike Ride (or just the Short Shorts Ride), if you can imagine it, it’s being planned for Pedalpalooza. If it isn’t, you can plan it.

The bike fun movement isn’t new, and it isn’t unique to Portland. All over the world more and more young people are rejecting the automobile addiction of our petroleum past while embracing modes of transit that allow for positive social interaction that fosters stronger bonds within the community. Public transit use is skyrocketing as the price of oil is making car ownership a liability and an economic burden that is unaffordable for millions of Americans who can barely pay for housing.

More than half the country now lives in urban areas where it is easier, cheaper, and more pleasing to commute by bus, train, or bicycle. Recent studies have found car usage and ownership between 18-34 year olds has dropped by a staggering TWENTY FIVE percent over the last ten years in the U.S., and that alone is reason to celebrate, especially when considering 8 of the 10 richest corporations dominating the world economy are oil companies.

But reliable, efficient bus and train networks still do pollute, and also require large sums of money to build and operate (though still a fraction of the taxpayer money spent on highways and cars), and they still usually run on some form of fossil fuel. So really, the only solid threat to the petro paradigm is the bicycle. So much so that the city of Los Angeles is getting pressure for painting bike lanes green from car companies that don’t want them showing up in the background of movies and advertisements. Seriously.

When we talk about being the change we want to see in the world, and creating a better future, there really isn’t a simpler, easier, cheaper way to start that change than your bicycle. Protesting the things you don’t like gets old fast if you don’t have a solution to the system that’s oppressing you. As Portland’s own Community Cycling Center’s motto reads: ‘The bicycle is a tool of empowerment and a vehicle for social change’.

We’ve seen in city after city how the bicycle has played a critical role in Occupy actions, from the San Francisco Bike Cavalry to the OWS Bike Coalition and even across the pond via the London Bike Swarm the bicycle is the ultimate street machine for protesters (and police alike). Pedalpalooza has been historically an unpolitical thing, but its precursor Critical Mass has had many political components in every city it’s taken place. For the most part, this style of ride got phased out here in Portland because bikes got their way. We won. The future we wanted was made real by the actions of activists who wanted a better city where cycling was safer and bike fun could be had. Now instead of a simple mass of riders corking intersections and shutting down automobile traffic, we have a diverse bike community with mobile bike dance parties, late night mystery rides, tall-bike jousting, chariot wars, fountain make-outs, daytime nudity and enough civil disco-bedience to make your head spin.

Each year seems to top the last with more rides, more bikes, more drinks, more lights, more music, and more fun. Never have I heard people start talking about the rides they’re planning so early in the year, it genuinely feels like the anticipation for Pedalpalooza 2012 is making people giddy with excitement. If you have a bike that needs fixing up, get it fixed up. If you don’t have a bike, get a bike. Borrow it from somebody, I guarantee you know people with multiple bikes to lend. Just don’t miss out on this because Pedalpalooza is something that will change your life and when it’s over you won’t know what the hell to do with the rest of the year until June of 2013.

See you in the streets.