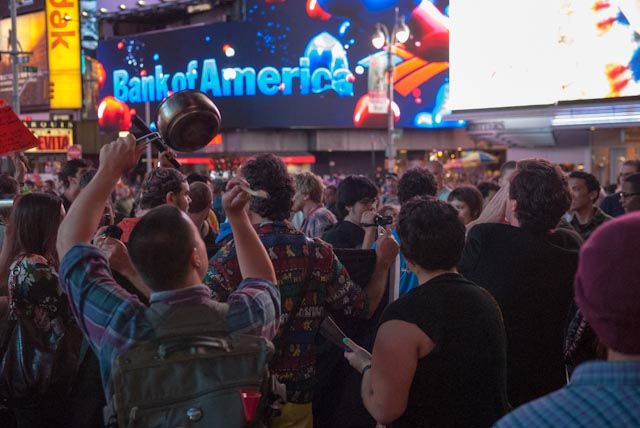 Two direct actions in three nights. Both started out from Washington Square Park in Lower Manhattan, and both were ostensibly in solidarity with the huge mobilisation of protesters in Québec against raised tuition fees and the commodification of education. The two protests were quite different in nature but both revealed much, not only about the current state of play in the US Occupy movement but also about the position we all find ourselves in more generally, as those who actively seek to find an alternative to the rigor mortis that is post-crash neoliberalism.

The first action began with impromptu teach outs about the situation in Québec and state repression. The crowd steadily mushroomed to around 400, and consensus that a march was in order was unanimous. The crowd snaked out of the park into 8th Street, claiming the streets of New York as their own and belting out novel chants like: “Shit’s, Fucked Up, Shit’s Fucked Up and Bullshit” and “1,2,3,4 I Declare a Class War. 5,6,7,8 Eat the Rich, Smash the State.” Oncoming traffic was halted while good natured occupiers posted info sheets about events in Québec through the windows of yellow cabs. The sound of beeping horns filled the air, some in solidarity, others in frustration. What was missing?

The NYPD. YouTube videos left me in no doubt that cops were perfectly capable of mass arrests on the Brooklyn Bridge, or smashing a medic’s face into a window, but they appeared to have been caught on the hop. OWS activists told me that it was very rare to occupy the streets for so many blocks without significant police intervention. The softly, softly approach didn’t last much longer, however, as the cops suddenly decided that the street was off limits. This approach soon broke down into farce when a newly arrived, white-shirted commander entered the scene and announced that the real menace was the pavement. “The sidewalk is temporarily closed,” he announced sternly in a thick Big Apple twang, unaware that his order was either an invitation to return to the street or a demand for people to spontaneously combust. Protesters chose the former, and the march continued with vibrant energy and swarming unpredictability, as the now iconic projector team flashed “bat signals” onto Gotham’s buildings, claiming the city as occupied for the “99%.”

The march involved a few more scuffles with New York’s finest, which were always met with the same response: “March, March,” they urged, keeping the movement moving. A highlight was when one occupier covered three cops with a bucket of red paint and managed to escape to tell the tale. The march, which was unorganised but not disorganised, anarchic but not chaotic, culminated in a valedictory de-briefing in Union Square.

Two nights later (and for the third night running) another solidarity march set off from Washington Square Park, this time with only 30-40 people. Groups of threes and fours skulked off to a different meeting point, in order to throw off the ubiquitous police detail. Numbers shrank further between points A and B, and the atmosphere was markedly different from the previous march. This was more sombre– there was no strength in numbers. Arrest would be that much more likely, and yet the determination was even more palpable. This was the hard core of mostly young people, many of whom were living on the streets and outside the system, but most were college-educated. A rag-tag bunch, one who went only by the Dickensian nickname “Pockets”, and another who wore neither shoes nor socks (ever, I was informed, which is a truly revolutionary – or foolhardy – act on the streets of New York). Some were from the city, but many had come cross country on a pilgrimage to the Mecca of Occupy Wall Street. Currently, thousands are criss-crossing the States like the protagonists of Jack Kerouac’s On The Road, but with strong political and economic grievances, not just in search cultural self-exploration. Some had just arrived back from Chicago, where huge anti-NATO protests attracted a militaristic response from Chicago PD. Many witnesses said it was the most violent they’d seen.

The instinct of occupiers to take the streets, no matter how small a group has gathered, would appear to be a shared characteristic. It’s as if it was the work of parallel evolution upon the growing numbers of people across the globe who have decided that enough is enough. Again the group marched up the road into oncoming traffic, walking in circles at large junctions to block traffic and chanting “Sol, Sol, Sol, Solidarité.” There was pride and determination, but also a kind of frantic desperation reminiscent of some smaller actions in London. There was no plan, and so the group became disjointed. The responsibility for the narrative of the action was then unceremoniously ripped from the hands of occupiers as the ridiculous NYPD wrote their own story.

On the corner of East 12th and 2nd Av, a young couple bringing up the rear in an adorable contraption (he on a bicycle, pulling her along in a tiny carriage,) were suddenly and aggressively set upon by uniformed police. Both were manhandled and informed that they had broken the law, by “riding the wrong way up a bike lane.” As one officer apprehended the cyclist, a small crowd formed around them, which set the scene for the most outrageous act of the night. An overweight, grey-haired cop with dead eyes casually walked up to two other on-looking occupiers and aimed pepper spray directly into their eyes. The initial couple offered no resistance but were violently arrested, the girl being thrown onto the hood of a cop car and handcuffed. Most of the police officers appeared to exhibit genuinely sociopathic behaviour, with a deep-seated disdain for the act of protest.

The couple were arrested arbitrarily, and the NYPD left the scene in double-quick time, leaving a shaken and outraged group behind. Another post-march debrief took place in Union Square, with discussions about what went well and what could have been done better – no-one got the number of the pepper-spraying cop, for example, whose violence was every bit as sadistic as the now famous Lt. Pike at UC Davis. Finally, after OWS medics checked for wounds, everyone dispersed until the following day, the fourth straight day of action in solidarity with the people of Québec who give strength and inspiration to us all.

I only saw a tiny slice of Occupy Wall Street, and did so during an understandable lull following the mobilisations earlier in the month. It was also when the focus of the national movement was rightly on Chicago, and yet it was still encouraging in terms of energy, intelligence and radicalism. Relationships and organisational processes appear to be strong, and they are already investing significant resources and thought towards planning for their first anniversary on September 17th, “Black Monday”, which will hopefully make the Chicago anti-NATO bash look like a mere skirmish. People from all over the world are encouraged to descend upon New York’s financial district, to mobilise a critical mass of people.

For now, strategy is less clear. As in London, with the loss of camps and the pros and cons they brought, there is no longer a physical and political space to coalesce and organise from. Perhaps as importantly, in the eyes of most US citizens who get their news from mainstream sources, Occupy ended when the camps were evicted. And so for now, the strategy would appear to be about showing a consistent willingness to take it to the streets, and be arrested if necessary. Increasing numbers have lost their fear about the harms a criminal record can bring to an individual’s prospects. The ongoing struggle against zombie neoliberalism is now taking the form of sporadic but tacitly agreed upon antagonism between a brutal police force and unarmed crowds. This is the frontline, because it’s the only line we can currently reach, until we have more numbers and better formed ideas emerge about how to lay a glove on those with real power, not just the petty (but no less painful) power of the police nightstick.

In many ways, we are all in the same boat. OWS is undoubtedly larger and more radical, infused with a confident and re-energised anarchism, but ‘the global Left’ of all persuasions still finds itself at a crossroad. We know what we hate, and we know in detail how damaging, how unsustainable and how exploitative it is. We also recognise widespread desire for radical change, and understand that neoliberal ideology has failed. The challenge now is to find a way to replace the hefty, rotting corpse of the old with an articulated, vital and dynamic new, that catapults humanity into a desperately needed new paradigm. Revolutionary zeal is already palpable; many just need to be shown where it can best be channeled. As the crisis deepens (and the self-immolating policy response from governments ensures that it will), what might now be considered a radical political and economic leap will become just a graceful hop from a steadily sinking vessel. Whether it is Occupy, with its global network (the warmth of which I’ve enjoyed first hand on this trip) or a combination of various other progressive movements, the Left has to move beyond diagnosis to cure, and perhaps vaccination for future ills. Unity and radicalism are essential. OWS is suffused with both, and is the leading light in this leaderless movement in the West, in its own beautifully shambolic and anarchic way.

1 comment for “Occupy Wall Street – Taking it to the Streets”