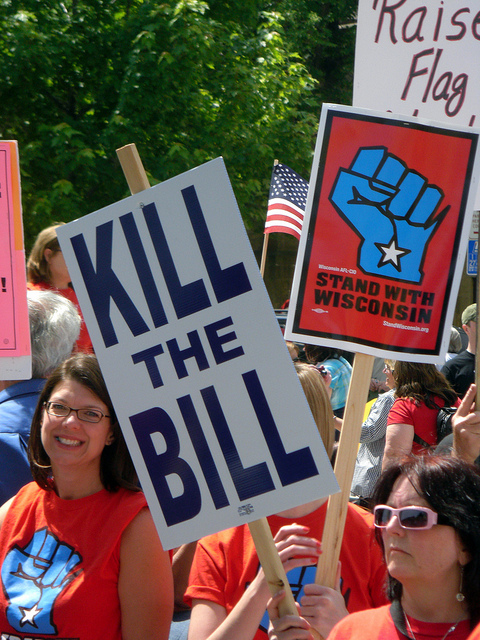 In the wake of the Wisconsin elections and the failure to unseat Governor Walker, AFL-CIO President Richard Trumka has issued a victory statement of sorts, resorting to the most tortured and convoluted logic.

For starters, Trumka proclaimed that, “Wisconsin took back its Senate.” Although he did not explain exactly what this was supposed to mean, presumably it refers to the fact the Democrats won the majority in the state Senate, switching places with the Republicans. In other words, one party that is controlled by the 1% has been replaced by the other party that is controlled by the 1%, and this, in Trumka’s opinion, is cause for celebration.

The assumption that the Democrats – despite all the money they receive from Wall Street and the rich – somehow represent the 99% gives us a strong indication why the standard of living of unionized workers, along with all other workers, has been on a downhill slide since the 1970s. One of the biggest gifts to the rich in recent history has been former President George Bush’s tax cuts, since they benefit the rich far more than anyone else. These cuts have contributed heavily to the growing inequalities in wealth, not to mention the federal deficit. Nevertheless, Obama reversed his campaign promise and extended them; and former President Bill Clinton is now calling for their further extension.

While winning a majority of Democrats in the Wisconsin Senate, the AFL-CIO lost the more important contest by failing to remove Governor Walker from office. Trumka blamed “a flood of secret corporate cash” for the defeat. Here Trumka is being too kind. The real credit should go to the AFL-CIO and its losing strategy that has been the core reason why the union movement is in shambles.

This readiness to offer concessions by top union officials – as opposed to putting up a fight – has been rampant across the country in both the public and private sector. It has contributed significantly to the undermining of the standard of living of working people and to the growing inequalities in wealth. It is the number one reason why unions have not succeeded in recruiting masses of new members. After all, why should workers join unions and pay dues, only to watch their salary and benefits drop? And it is the number one reason for the failure to unseat the rabid anti-union Governor Walker in Wisconsin. The New York Times reported that approximately one-third of union families voted to retain Walker. Unions cannot count on their members for protection if their members cannot count on their unions for protection.

Rather than mobilizing members to defend their standard of living by putting up a fight, organized labor has relied exclusively on electing Democrats to office. Here is how one California union president, who represents tens of thousands of state workers, put it: “Under the previous [Republican] governor, our input was not sought, in fact, it was dismissed. Under [Democratic] Gov. Brown, we have a seat at the table.”

In response to why the California Federation of Teachers (CFT) union was supporting Democrat Diane Feinstein, another union official gave this insightful response:

“Because politics is pay-to-play, and the stakes for public sector unions are too high to be left out of the game. Just about every union in the country does this kind of thing. It gets us an audience and limited influence, which is better than nothing, but many votes still go the wrong way.”

In other words, the union strategy amounts to helping Democrats get elected to office in order to sit at the table with them and cordially discuss what concessions union members can make.

According to Trumka, “And we are winning. We’ve seen it in Tunisia, Yemen and other countries where the Arab Spring has taken hold; in Greece and France, where voters rejected the failed, Draconian policies of austerity…”

Aside from the fact that he has to go to another continent to find victories and aside from the fact that the union movement here in the U.S. has embraced austerity, Trumka fails to acknowledge that the people in these other countries refused to “pay-to-play” in order to get “a seat at the table.” They essentially smashed the table by mounting massive demonstrations in the streets and forced concessions from their governments. They were no longer willing to accept crumbs or concessions. The AFL-CIO has virtually refused to mount massive demonstrations in the street here at home.

Most top officials in the union movement have essentially accepted the framework of the 1% – promoted by both Democrats and Republicans – that sacrificing is only something for the 99% to do; it is beneath the 1%. But when unions offer concessions without putting up a fight, then they can expect endless demands for more concessions in the future. Why would those who are demanding these concessions abandon a winning strategy? And the demand for more concessions is already on the horizon. The U.S. government is burdened by a massive federal deficit, and the states and cities are struggling with their own budget problems. The 1% has refused to make any concessions. The Democrats and Republicans are consequently united in their resolve to reduce the budget deficits at the expense of working people by cutting Medicare, Medicaid, and Social Security, in addition to laying off public workers. It is a power struggle between the 1% and the 99% with the politicians of both parties firmly on the side of the 1%. The unions have already lost when they amicably pull their chairs up to the table in order to engage in polite dialogue. They are confronting brute power with humble requests.

With money comes power. As the income of the 1% continues to soar, it wields considerably more power. The current program of organized labor is to accept austerity under the guise of “shared sacrifice” in the form of lower pay, reduced benefits and layoffs – all without any resistance. This policy weakens the unions.

If the union movement is to survive, it will have to abandon this losing strategy and go on the offense. Following our brothers and sisters in the rest of the world, it will have to organize massive demonstrations and announce that the 99% has already given up more than its fair share while the income of the 1% has continued to rise. It is time to turn the tables and demand that there be no cuts to social services or safety nets, that these programs instead be strengthened, and that the federal government launch a jobs program that would employ millions of workers, as was done in the 1930s, all to be funded by taxing the rich.

The unions have a choice. They can rely on themselves, act independently, organize a fight and inspire millions, or continue down their self-destructive road. Declaring victory in the face of defeat, however, will fool no one.