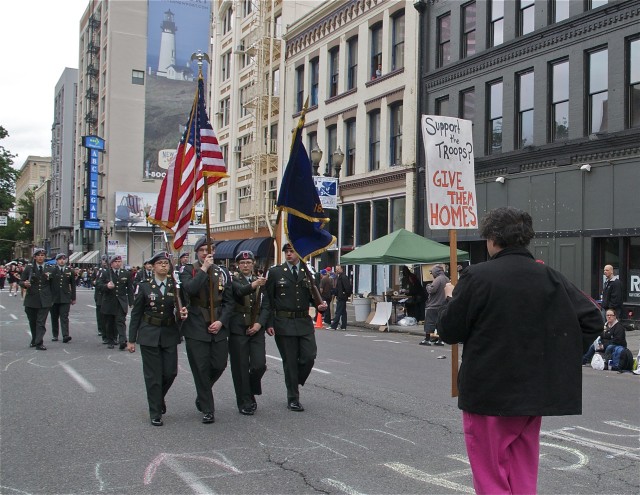 The Rose Festival Grand Floral Parade will never be the same again, thanks to Right to Survive (R2S) and houseless activists. This is the second year that R2S, an organization led by houseless and previously unhoused people, put out a call for “Pitch A Tent II—The Houseless Strike Back.” Together with folks from Right 2 Dream Too (R2DToo), they invited friends and supporters to pitch tents with the unsheltered along the parade route downtown to protest against the city’s ordinance, which allows people to put up tents for parade day, but criminalizes setting up tents for survival for any other day of the year.

Ibrahim Mubarak, co-founder of R2S, R2DToo and Dignity Village, wanted this year’s action to put pressure on city officials, who continue to drag their feet on the houseless issue. He made clear that this action shows how the city prosecutes houseless people who try to erect shelters for themselves, but the ultimate goal of R2S is to get folks off the street and into a designated area where they can be safe and take care of one another. He hopes that this action will bring awareness that there is a homeless crisis in Portland and nationwide. He said, “The city needs to sit down at the table with us and come up with solutions that will put a dent in the houseless situation.”

Mubarak talked about Right 2 Dream Too, which provides a safe place for about 90 people to camp every night on NW 4th Avenue and Burnside, as one of the solutions. R2DToo wants to expand housing for 300 people per night, as more and more people lose their jobs and homes due to the crippling economy. But instead of cooperating with them, or letting them continue to self-manage this space, the city is fining R2DToo $1,200 a month. He said that Dan Saltzman, who leads the Bureau of Development Services, has described it as “not a humanitarian issue; it’s about zoning and codes.” Mubarak pointed out that the city spent $3,400 for each “bike shelter” in the city, but won’t budget a dime to provide more solutions for the houseless. He said that the houseless and their supporters are trying to build communities and shelters for themselves, where they can be autonomous and make decisions to maintain safety and human rights. 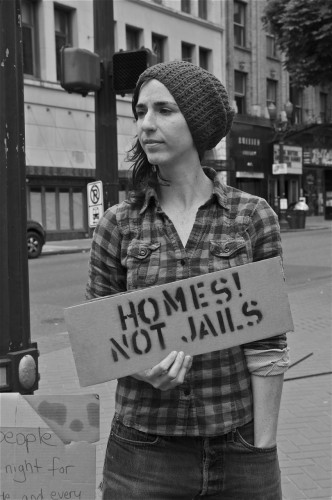 Many people answered the call to join Pitch A Tent II. There were folks from last year like the Radical Cheerleaders, Sisters of the Road, and B Media, and many new supporters from Reed College, PSU, high schools, Occupy Portland, Share Wheel from Seattle, and many more. A young high school protester from West Linn said he was here to “support people asserting their basic human rights.” He informed us that 47 houseless people died last year in Portland, according to the Multnomah County report, which was published in Street Roots. He said, “It’s morally despicable for the state to rule out any options for people who are trying to survive under such dire circumstances….It’s people in beds telling people without beds where to live or sleep.” He added that out of the 47 people who died, 40 were women, and mainly women of color. To him, “This fact is a reflection of how a classist, racist and patriarchal society oppresses the most vulnerable groups of people in our society.”

Several houseless people voiced their grievances about not having basic human rights and police harassment and brutality. They said they were fed-up with being woken up by cops in the middle of the night, getting beaten or arrested, and having their belongings taken away from them forcefully. Joseph Heath, a 27-year old houseless man, said that the houseless just want “a chance to get off the streets and take care of ourselves.” Like many houseless folks, he stressed that they want to maintain their autonomy and not have officials and the cops telling them where they can’t go or do. Another man, who’s been houseless for over 10 years, observed that before most of the houseless were older men. He’s seen more and more “kids and women” out in the streets in the last few years, and “That’s not right!”

On Friday, despite the rain, houseless activists and supporters set up 81 tents on 5 blocks on SW
Fourth Avenue. During the day, we handed out leaflets about the protest to many pedestrians. Several people dropped by and provided us with free food, sleeping bags, tents and encouragement. Occupy Portland, Sisters of the Road and Hush Hush restaurant generously provided us with good food and coffee. The Radical Cheerleaders danced and sang their hearts out, and spread the message to many appreciative passers-by. B Media projected inspiring videos of the protests in Montreal, and “Occupation Nation.” Several homeless guys played music for hours into the night. There was an awesome musician called Johnny from California, who was so inspired and inspiring; we were spellbound for over an hour! The police dropped by, but were surprisingly low-key.

On Saturday, it finally stopped raining. When the parade started, Ibrahim walked into the middle of the street with the biggest grin on his face to lead the parade, carrying the sign for all to see, “Right 2 Survive, Shelter, Shower Sleep.” He walked up several blocks, waving to the crowd like he belonged there. Art Rios Sr. sat down in the middle of the street, holding up a sign, “Housing Now, Homes have Hearts.” His action caught the attention of the police, who approached him quickly and asked him to move. He complied, but later, sat down in the street again with fellow protesters, holding up signs: “Right 2 Survive,” “Housing NOW!” “House Keys, not Hand Cuffs.” We cheered them on and started chanting, “Whose streets? Our streets!” Several activists stood in line along the route for hours, carrying signs to support the houseless. When the soldiers approached, one of the Occupy activists stood in front of their path, holding up the sign, “Support the Troops? Give them Homes, ” “100,000 homeless vets on the streets every night.” The soldiers were visibly shocked, and seemed riveted to the signs.

Thanks to the collective actions of so many people, this action was a big success. Over 200 people were involved in this year’s action, an increase from last year. We came away, inspired by the outpouring of support for the houseles. This action not only made an impact, it also had a lot of heart!