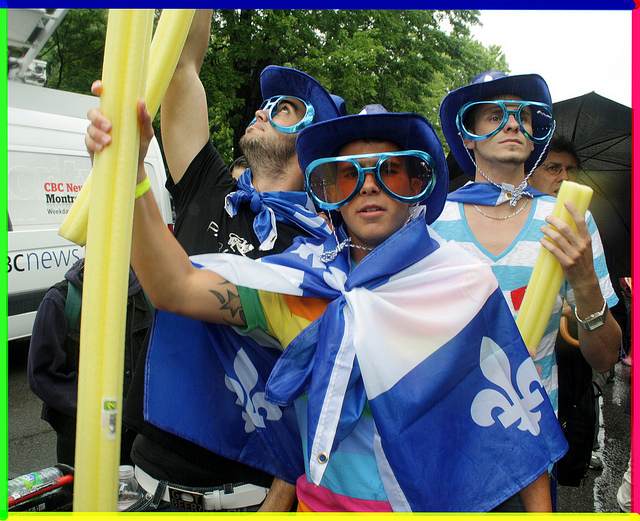 Proud, queer, Quebecois & on strike at CLASSE demonstration. Photo by scottmontreal via Flickr.

Sometimes reading a Chris Hedges’ article is like drinking a fine glass of wine:  one that spills midway and ends in a nasty stain.

In a recent article on Canada’s emerging social movement, Hedges hits the mark and inspires as he diagnoses the science of social movements, explaining how the Canadian protest movement was able to expand into a truly powerful social movement:

“The Canadian students have gathered widespread support because they linked their tuition protests to Quebec’s call for higher fees for health care, the firing of public sector employees, the closure of factories, the corporate exploitation of natural resources, new restrictions on union organizing, and an announced increase in the retirement age. Crowds in Montreal, now counting 110 days of protests, chant ‘On ne lâche pas” — We’re not backing down.’”

Yes! the Canadians — like their revolutionary European counterparts — realized that the above austerity measures are capable of igniting and expanding a broad-based social movement.

But just as the buzzing effects of Hedges intoxicating article start to take hold, the mid-sentence spill occurs:

“If these mass protests fail, opposition will inevitably take a frightening turn. The longer we endure political paralysis, the longer the formal mechanisms of power fail to respond, the more the extremists on the Left and the Right (emphasis added) — those who venerate violence and are intolerant of ideological deviations — will be empowered.”

This is a repeat of a long-standing error in Hedges’ writing, one that he has surely received an unending stream of criticism from those on the Left.

But Hedges means well. His equal treatment of Left and Right “extremism” has a historical basis: Hedges came from the generation that was rightfully repulsed by Stalinism and its global copycats, pushing him to make erroneous political conclusions that he clings to: that the radical Left and radical Right are equal threats, two social forces that get unleashed in times of crisis, both to be condemned.

The flaws in Hedges conclusions are exposed as he attempts to prove them in the same article. After correctly giving several examples of radical Right fascist threats bubbling up across Europe, he stumbles while trying to find a Left equivalent.

To prove his “Left and Right are the same” theory, Hedges can only mention the extremely marginal “Black Bloc,” which is not even an organization of any kind, let alone one that has the intent or ability to harm immigrants, attack labor unions, or exact rage on minorities of any kind. And under no circumstances can the Black Bloc be equated with the entire revolutionary Left.

The “violence” of the Black Bloc is also marginal, and in no way a threat to working people, since it is focused entirely on the corporate state that Hedges hates so much. One needn’t endorse the political strategy — or lack of it — of the Black Bloc, but Hedges equating them with fascists lacks obvious merit.

To further prove his “Left and Right extremism” point, Hedges continues to do the opposite, as he equates the Communist mentality with the Right-wing fascist:

“Communists easily grasped the simplistic, binary view of the world that split human relations into us and them, the good and the evil, the friend and the enemy.”

But in the article’s introduction, Hedges says, correctly, that:

“This [the mass movement in Canada], as with the international Occupy movement, has become a test of wills between a disaffected citizenry and the corporate state. The fight in Quebec is our fight. Their enemy is our enemy. And their victory is our victory.”

Hedges draws the same line in the sand that the Communists before him did. Like him, the Communists fought against capitalism for a better world.  Unfortunately, the only countries where a remote version of Communism acquired state power were mired in poverty, and they reproduced the barbarism of poverty that exists in all poor capitalist countries to this day. Cold war era socialist countries had additional barriers such as the economic embargoes imposed on them by U.S. led western imperialism and/or threatening military gestures and finally the Stalinist bureaucracies that existed in these counties.

Hedges fails to realize that he’s already crossed the line into the “us versus them” world that he condemns; he’s no longer in the “middle” because the middle has disappeared, the result of massive social and economic inequality. The traditional “communist” analysis of class struggle is again becoming relevant in the United States, though it never ceased being relevant in most of the world.

It’s doubtful that Chris Hedges truly thinks the Black Bloc anarchists are comparable to Nazis, but he must find a proof to his false theory, and thus ventures into the ridiculous.  Hedges, however, redeems himself and then some by elaborating on the revolutionary potential of fighting austerity.

The Occupy Movement is floundering in the United States due to its lack of focus and fragmented demands. Hedges displays good social movement instincts as he diagnoses the basis for the Canadians’ success: working people are united by the few issues that affect the vast majority, not a hundred separate issues that, although important, have no potential to inspire a mass movement at present.

If it wants to grow, the inevitable social movement in the United States will need to follow the Canadian example, itself a replica of the anti-austerity movements developing throughout Europe. Latin America’s ongoing social movements were birthed along similar lines, and the Arab Spring movements will re-group according to the same principle. Hedges’ vast influence has been put to an overall good use.