The TriMet budget will cut bus service, as well as increase fares for youth and adults. The cuts in bus service will particularly affect those living east of 82nd Avenue who do not have easy access to a MAX line, and who already have only one frequent service bus line. According to Hector Jr. Osuna, an organizer with Organizing People/Activating Leaders (OPAL), there are more people of color and low income individuals moving to east county. “If they do not have bus access to get to work, the hospital, the grocery store, or to their families, then they are deprived of opportunities other individuals have, which is why we this is a civil rights issue,” Osuna said. 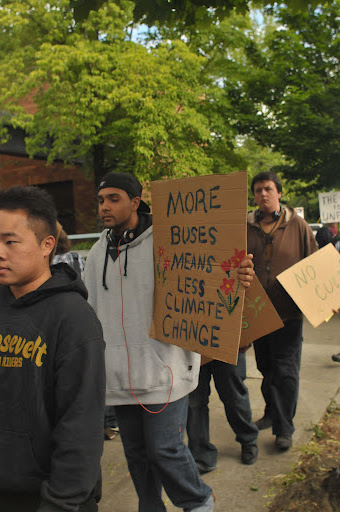 Osuna cited statistics revealing that in the Metro area 76% of people of color that are transit riders primarily use buses and 32% do not own a vehicle. “People of color are disproportionately transit-dependent, and disproportionately bus riders. It also means that people of color are more likely to be two zone, single fare riders, which is the group that will experience the largest fare increase under TriMet’s budget,” said Osuna. “It also means that as bus service continues to be cut, people of color are impacted the most, because they will experience more missed connections due to a greater transfer rate. When we’re looking at where TriMet is putting funding and compare the bus with MAX, we see different priorities. It’s ironic that TriMet says it does not have enough money, but they are building a new rail line, while we have one of the oldest bus fleets in the country. Buses go places where MAX does not. Buses go through neighborhoods. They are the lifeline of the city.”

TriMet cuts will also affect the young and elderly. According to Osuna, “It is also crucial to consider the needs of our honored citizens and youth. Many people with disabilities and the elderly live on fixed income and cannot afford to pay more money. And with the YouthPass being cut, and employment opportunities scarce, our youth who completely depend on transit should not have to pay more either. We want to provide a system that attracts our young people to be lifelong transit riders, not looking to get a car the first chance they get.”

OPAL’s budget campaign grew out of the Campaign for a Fair Transfer, which sought to extend the allotted time for transfers after fare purchase from two to three hours. The idea was brought before the TriMet Board, but when TriMet “swept it under the rug because of the budget issue,” said Osuna, “it morphed into a campaign for an alternative budget.”

Bus Riders United has proposed keeping the current fares for youth and honored citizens. TriMet’s budget maintains the honored citizens rates, but raises the youth single ride fare from $1.50 to $1.65, while the youth monthly pass will increase from $27 to $30. The Bus Riders Unite proposal also would keep the Free-Rail Zone downtown intact for all riders who have proof of valid fare for that day, and includes a “reasonable fee” for park and ride users.

Karla Hernandez, an organizer for the Center for Intercultural Organizing noted that many of the people who rely on TriMet work low income jobs and are on a tight budget. “Some of these people can already barely afford to pay for food, rent, and transportation to work. They already have too many costs to meet, and the two hour limit on transfers is not enough time on one fare if they, as many do, live in Washington County but work in central Portland.”

Hernandez also noted that while TriMet is building new lines, these are largely in privileged areas. “TriMet is taking from people that need public transportation and can barely afford it and giving it to people who already can afford it. Public transportation should be accessible to all people, but instead is becoming a barrier. You are almost better off walking.”

After TriMet refused official acknowledgement of the Bus Riders United alternative budget, Osuna stated it was clear where the TriMet Board stands in its relationship with those who use public transit. “It would have displayed collaboration and shown that public participation is more than just a check box they have to make sure gets marked off.”