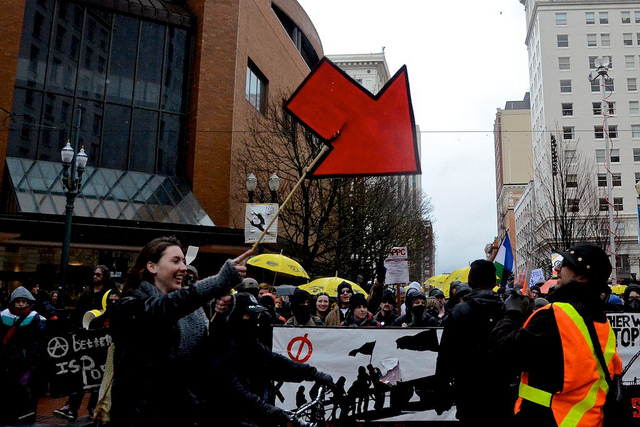 This article originally appeared on the Portland Radicle.

By Mike and Emily

Occupy is dead. Its original incarnation has reached its memetic peak, and it cannot re-create a spectacle akin to that of last fall. Mainstream media, crucial to popular awareness of Occupy Wall Street, has made the judgment that if Occupiers can’t force it to pay attention by pulling off some daring adventure, then nothing more can be said. If this spectacle is the only thing that gave Occupy1 meaning, then it never really lived and the media which transmits that spectacle is correct to be seeking Occupy’s zombie death rattles.

Mainstream media has had a complex relationship with Occupy Wall St. from its beginning. Widespread coverage of it began only after footage of police brutality captured by protesters gained popular sympathy. The carnival atmosphere of the encampments, with their break from everyday life, created a spectacle that further captivated the media. At the same time, they directly undermined the passive and alienating culture of spectacle by creating spaces for direct participation on a human scale, for making history rather than just observing it. These were simultaneously semi-autonomous zones in which people participated in community; co-creating a culture of resistance, solidarity, and voluntary mutual aid; and theaters of those social experiments for the broader public. Their existence challenged the prevailing narrative that capitalist society, with its dominating, alienating, anti-cooperative, and destructive social relations, constitutes the best or only possible world.

The camps became hubs that attracted diverse participants from university students newly facing mounting debt and a collapsing job market, to previously-employed workers unable to find work, to unhoused individuals who have been forced out of or chosen to leave mainstream society. Within these crucibles, participants grappled with power inequality and class divides, marginalizing social dynamics, abuse, mental health issues, and other problems that starkly show the failure of a society built on the logic of capital to meet human needs. However, many involved soon realized that both the root causes of these problems and their solutions were beyond the scope of the camps. They exemplified both a project, which imagined a better world and the deep inequalities between participants that one must acknowledge and address in beginning such an endeavor.

Disparate groups drawn to Occupy felt empowered in a moment to act. Instead of a mere rejection of this or that injustice, which would be eclipsed by a new horror tomorrow, regular people learned to speak together and were actively seeking a collective experiment that utterly contradicted the dictates of market morality. People were sharing, working on projects together, creating a critique of the world, and seeking to fix it. They were not pleading. They were doing. However, while militancy varied from group to group, Occupy’s actions were largely symbolic with minimal disruptions to power and capital. Nevertheless, the camps were broken up with force. Society is so brittle that by even beginning to rebel, people became targets. What Occupy accomplished can be difficult to understand when put up against the torrent of media it inspired, an ocean of images, which signified popular resistance but threatened to drown a potential movement. The media is a heavily corporatized industry that glorifies spectacles as quickly as it abandons them for new ones. Occupiers cannot plod after an uncaring image-machine that will distort their grievances or seek to reform a system so fundamentally cruel. In the absence of the blinding glare of the media, Occupy has to take the lessons it learned and use them to organize beyond its capacity for large theatrical events, in a way that doesn’t require unlimited momentum and attention.

The media has taken Occupy to task because there was no general strike on May Day. Getting to that point will require building a broad base of support. Although a spontaneous celebration of refusal and rebellion is still something to hold as an image, it is just that. This is not a movie: Occupiers subsisted on the images they created as much as the powerful feared them. One cannot survive on those, nor confuse the map with the world itself.

In order to manifest their values beyond the scope of Occupy’s original camps and participants, those who continue to organize must form broad networks with existing community groups recognizing the interconnectedness of struggles. Drawing lessons from Occupy’s historical and recent precursors (occupations of public spaces, workplaces, state buildings, prisons, and even a whole island), organizers must help create counter-institutions that directly address people’s needs, challenge power, and tangibly defend their efforts. Some possibilities are the development of alternative economies; the reclamation of land and vacant buildings for community centers, gardens, and homes; workplace occupations and labor and rent strikes; building alternatives to the police; and direct, long-term disruption of institutions of state and corporate power. These are projects that both groups that pre-date Occupy Wall St. and some Occupiers have been exploring.

Instead of a world for the consumption of images and symbolic participation in life, a world is needed where everyone can exist in dignity as co-creators of their existence. Occupiers must refuse to be assigned parts in the theater of social struggle. They must begin the project of exploring where we have been in order to plot a course to where we want to be. And they must do so with their own eyes.

(1) In this article “Occupy” refers generally to Occupy Wall St. and autonomous groups that organized actions in solidarity with it.