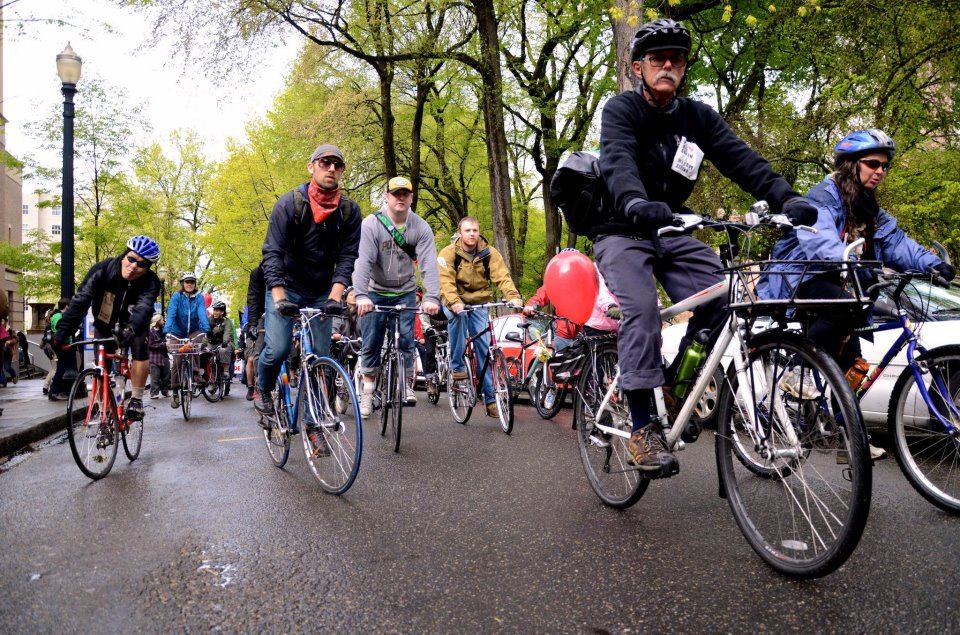 Occupy is dead! This is what the media would like us to believe. Even some in the movement have taken to proclaiming this. Clearly, the old encampment is no more. In that sense, Occupy is indeed no longer. But to judge whether a movement is alive or not based on the status of three parks is absurd. So let’s just say, Occupy is not what it was “back in the day.” Most would have a tough time disagreeing. That said, let’s not forget that we still have a solid encampment at City Hall and an incredibly determined hunger striker to rally around.

Seriously though, back to the idea of Occupy being dead. It is a little disheartening and I have personally struggled with this mostly apparent reality. Life is not nearly as inspiring as it was when the encampments were at their peak. Even though I never camped, I rode down there for a march or the GA multiple times a day. The new world was unfolding right there in the center of the city. Unfortunately, I felt the equivalent of a chat room lurker on a bike. I had not quite meshed.

Then came the eviction. Solidarity was needed from far and wide. It was not really something to look forward to, but it seemed everyone was ready to be there. Naturally, my partner and a friend were there when the call for a bike swarm was made. We rode in a determined manner at a decidedly slow pace. To say the least, it was intense. I do not think I have ever felt a greater sense of belonging in my life. Finally I meshed.

It took a bit, but soon came the call to start regular meetings. After N17, the swarm got real and about 30 swarmers met at the Red & Black to discuss strategy and outreach. The rest is history. From the ashes of the old encampments the PDX Bike Swarm came roaring into existence. The swarm has taken part in dozens of events over the past nine months. During the recent Pedalpalooza, a strong swarm of over 200 rode by City Hall and looped the three parks for old times sake. So while Occupy may be “dead,” the swarm is very much alive – and has been since its inception. The swarm has been in contact with sister groups like OWS Bike coalition and SF Bike Cavalry. Most recently, bike swarms have cropped up in other cities, such as London, Salt Lake City, and Seattle, all inspired by the PDX bike swarm.

The prime part of summer is right here in front of us. What is to be done with it? The call is out for a new round of swarm meetings to plan further actions. Together we can reclaim the streets, the parks, and, of course, put the fun between our legs. Let’s get bikes in the street. Long live bike swarm! 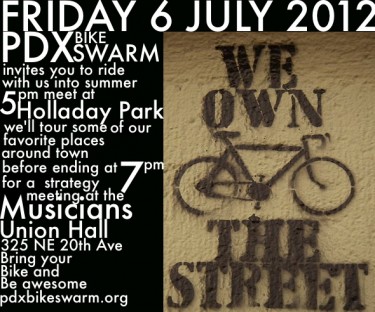 The PDX Bike Swarm invites you to join us as we ride into the summer this Friday, July 6. Meet up 5 pm at Holladay Park. Then we’ll tour some of our favorite places around town before ending at 7 pm for our strategy meeting at the Musicians Union Hall, 325 NE 20th Avenue. Bring your bike and be awesome. PDX Bike Swarm group ride and strategy meeting.

P.S.  Occupy/Bike Swarm are neither dead nor alive, but what we make it. We should rage both and more!

8 comments for “Occupy is Dead — Long Live Bike Swarm! We Ride This Friday!”