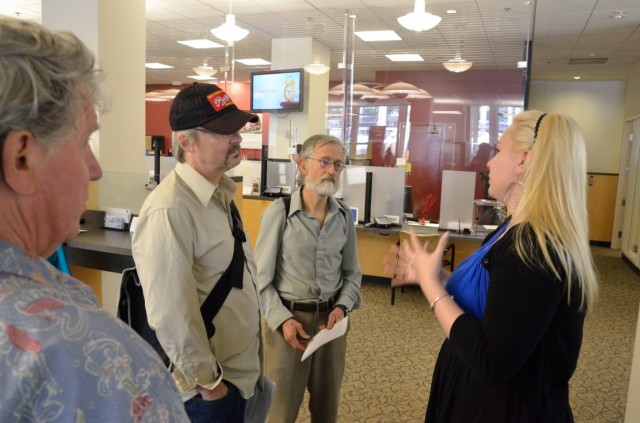 A city-wide letter drop in support of prison divestment was undertaken by community members and activists from the Portland Central America Solidarity Committee (PCASC) and Enlace at eight Wells Fargo branches on Monday, June 25.  PCASC and Enlace, both involved in the national Prison Divestment Campaign, organized the action to spotlight this important issue and address a lack of community accountability. They believe it is essential to publicize the connection between this powerful Wall Street financial institution and the private prison industry.

At each neighborhood branch, activists asked to speak with the branch manager about issues involving Wells Fargo’s investment in the private prison industry and delivered letters demanding that the bank divest. Although it is public information that Wells Fargo owns shares in GEO Group, the second largest US private prison company, Regional President Don Pearson denies the tie and remains unwilling to meet with PCASC members. Meanwhile, the Wells Fargo Advantage Fund continues to manage for-profit prison investments that support a system that blatantly incentivizes imprisoning poor people and people of color.

The majority of detained and deported immigrants are held in prisons run by either GEO Group (GEA) or Corrections Corporation of America (CCA). Abuses in these facilities have been widely documented and include wrongful deaths (both from assault and lack of medical care), rape and other sexual abuse, and other violent treatment of prisoners. With the financial support of Wells Fargo and other Wall Street giants, GEO and CCA are successfully able to lobby for private prison contracts and laws that criminalize immigrants and communities of color. Wells Fargo has a deep investment in these institutions that push for racist, anti-immigrant laws, criminalize people of color, tear families apart, and destroy communities.

No more than two days after the June 25 action, PCASC received a letter from the Wells Fargo legal department stating that PCASC members and supporters are no longer permitted in any Wells Fargo branch to discuss political issues. While it is clear that activists have now made contact with Don Pearson by letter (at least eight times!), PCASC will continue to raise awareness and demand that Wells Fargo end its financial support for the racist industry of private prisons and immigrant detention centers.