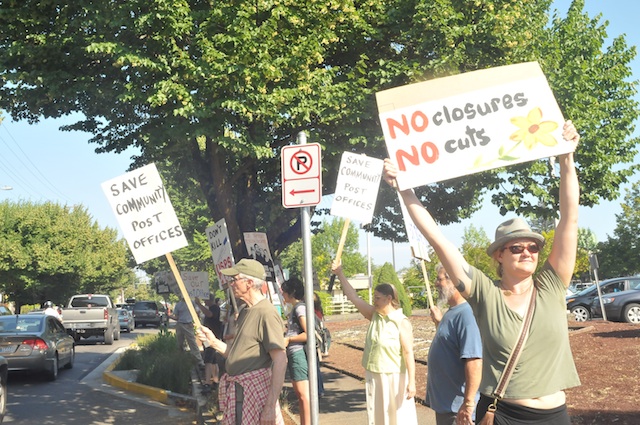 Rallies to Demand an End to US Postal Service Cuts

Imagine you run a small business, or even a large one. Now imagine a law is passed that requires you to prepay the health care of your employees for the next 75 years. Your company, should sales be up that month, might make it through to lunch, but the weight of providing healthcare for future employees, some of whom have not been born, would prove too heavy.

Yet the United States Postal Service (USPS) has been forced to do exactly that. The cost comes to $5.5 billion, and it is one of many reasons that politicians are now referring to the USPS as inefficient, even outdated, and more importantly, why they are trying to dismantle it.

The lies come fast, with little if any rejoinder in the corporate media. The politicians say the USPS is wasting public tax dollars, and nobody corrects this lie with the truth that the USPS does not receive US tax dollars and has not for over 25 years. They say the USPS is broke, but when you take away the prepaid health care, it has made a $700 million profit over the past four years.

The USPS is one of the fundamental pillars of our country. Its history traces back to July 26, 1775, when Benjamin Franklin was appointed postmaster general by the Second Continental Congress. One of its primary original purposes was to deliver a wide array of news and propaganda pamphlets at a subsidized rate. In fact, the founders of the country enshrined this subsidy in order to guarantee the survival of one of our most important First Amendment planks – a free press. (Until recently, journals of opinion continued to enjoy dirt cheap mailing fees in order to provide the necessary flow of information to citizens.)

Over the years, the postal service also helped people in out of the way places keep in touch with friends and family for little cost; it is legally required to serve all US citizens, regardless of where they live. Try personally delivering a letter to your relatives in Iowa: You’ll find it costs more than 45 cents.

On Monday July 9, 30 people gathered outside the St. Johns Post Office demanding an end to the cuts proposed by Congress to right a ship that is wronged only due to rules such as the health care requirement – rules that would be deemed unconstitutional if imposed upon FedEx or United Parcel Service. Among these new money saving proposals are shutting down post offices; ending Saturday delivery; cutting jobs; and slowing service, including terminating next day delivery.

Postmaster General Patrick Donohoe began implementing a plan on July 1 that included some of these proposals, including closing almost 50 percent of US mail processing plants, cutting hours in half of the nation’s post offices and delaying first class mail.

At the rally, Jordan McIntyre told the crowd the importance of the USPS to him. “If they end Saturday service, I’ll need to wait to the next week to get my paycheck, which means bills don’t get paid.”

The USPS is not just about delivering the mail – it also provides jobs, often for the veterans our leaders love to say they hold in such high regard. “Twenty percent of postal employees are veterans,” said Sarah Hobbs, “who have a higher rate of unemployment [than the general population]. We need to be supportive of veterans, not putting them out of work.”

“I want us to protect our postal service so we can keep it. We lose that, a lot of people will be up the creek,” said Jack Herbert. “They won’t be delivered to. These days you get one or two businesses dominating the business. Government serves people, not profit. Companies like FedEx and UPS can jack the costs up and choose who they deliver to. It doesn’t seem to be public knowledge that public workers perform a service. We’re all in this together. This is the deliberate destruction of the postal service by Congress.”

Indeed, as Herbert implied, the post office is enshrined within the Constitution to serve “We the People”, not make a buck. While FedEx, UPS, and other delivery services exist to maximize profit for their shareholders – which includes exercising their free market prerogative to refuse delivery to places off the beaten path, or raise prices based upon geography – the USPS historically has offered fair access and pricing to all citizens.

“It’s BS trying to privatize the postal service,” said Scott Gibson of Laborers Local 483 . “Why does it have to be about making money? We’re better than that as a country.”

For more information on getting involved to Save the Postal Service, email: [email protected] 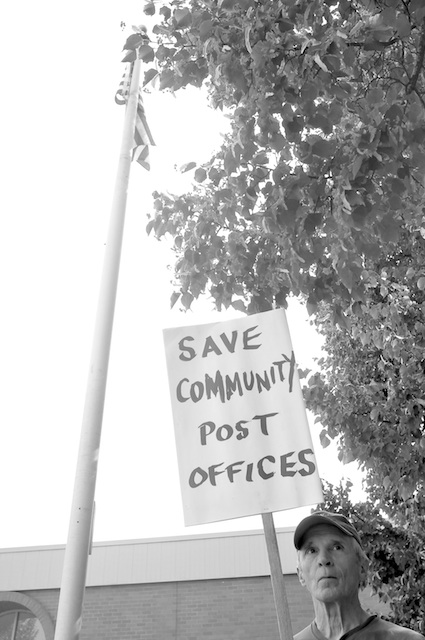