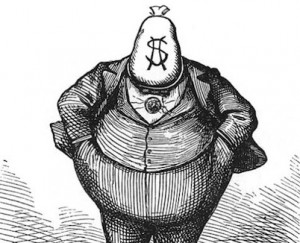 Caricature of banker during the Gilded Age.

The truly powerful feed ideology to the masses like fast food while they dine on the most rarified delicacy of all: impunity. ~ Naomi Klein

The two-tiered justice system in the United States is made crystal clear in its special treatment of financial sector crimes. If a man should commit the victimless crime of growing a few pot plants, he is given a long prison term and all his assets are seized. If a wealthy CEO bank executive swindles Americans out of their homes, jobs and savings, he gets to keep his ill-gotten gains – minus a small fine – with no admission of guilt and no jail time.

Impunity is defined as an “exemption from punishment or freedom from the injurious consequences of an action”. Internationally, impunity is credited with the continuation of evils from governmental massacre of civilians, such as that in Syria, to international banking fraud, such as the London Interbank Offered Rate (LIBOR) scandal which we see unfolding in the United Kingdom.

Quite simply, the LIBOR investigation is uncovering how 16 multinational banks allegedly colluded among themselves –  for personal enrichment – to fix the central global interest rate at which banks borrow from other banks. The LIBOR controls interest rates in some $900 trillion in bonds and loans worldwide, which is more than 60 times the GDP of the United States. If you have a variable interest mortgage, car loan, student debt or credit card, you have been affected by their dishonesty. At present, the financial sector is calling this a “victimless crime” in an attempt to head off the avalanche of lawsuits already being brought.

The American people have waited four long hard years for justice that has been denied. President Obama’s commissioning of The Financial Crisis Inquiry Report: Final Report of the National Commission on the Causes of the Financial and Economic Crisis in the United States

promised hope, yet none of the identified perpetrators received meaningful sanctions, and no CEO was jailed. Though the Dodd-Frank Act- intended to reregulate the financial sector – was Glass-Steagal-light, it is being further watered down by the powerful banking lobby.

With the LIBOR scandal, the United States has an opportunity to rectify this lack of justice. Some familiar bank names are among the usual suspects – JPMorgan Chase, Bank of America, and Citigroup:

“Bank of America is among the banks being investigated, a person familiar with the matter told Reuters last year. The bank did not comment in its 2011 annual report.

It is one of 11 banks accused of conspiring to manipulate Libor in two lawsuits filed by discount brokerage and money manager Charles Schwab.” (Economic Times: The Times of India)

Most of the news concerning this scandal is coming from the international press, while the US corporate media continues to ignore the story much as they did the Occupy Movement. What press coverage does appear is cloaked in financial jargon so dense it could convince Americans into thinking the matter is too complex for ordinary citizens to grasp. Do not believe this. The LIBOR scandal is international fraud, and no one needs an MBA to understand that.

We can demand justice.

Sign this American petition to President Obama and the Congress to End the Banking Culture of Impunity: Investigate Prosecute and Incarcerate:

We demand a fully funded, independent and non-partisan prosecutor of high integrity–not beholden to any financial institution under scrutiny–to conduct a comprehensive investigation into the involvement of all United States banks, and foreign banks which do business in the United States, in the LIBOR scandal;

We demand that crimes uncovered during this investigation be prosecuted to the full extent of the law—with no plea bargaining– and result in incarceration of the CEOs and top executives who bear ultimate responsibility. We will not be satisfied with the prosecution and incarceration of lower echelon employees of said firms.

As citizens concerned about the wave of banking crises that are affecting our economies and our livelihoods, we call on you to take action to ensure that bankers are held responsible. This can only be done by introducing strong legislation against market abuse, including criminal sanctions for bankers who ride roughshod over regulations or break our laws.

2 comments for “Jail the Banksters!”