On May Day 2012, Angela Hammit marched in the rain with an umbrella in her right hand and a sign with an anarchy symbol in her left. Like the majority of marchers, she walked through the streets unless the cops pressed the crowd onto the sidewalk. At Salmon and Broadway, she moved through the intersection along with the other marchers. Several squads of bike cops wheeled in.

As Officer Terry Colbert approached with his bike, Angela proceeded to step backwards, angling towards the crosswalk and the sidewalk, never turning her back on the cops. Suddenly, Officer Susan Billard leapt off her bike, charged across the intersection (ignoring other protesters standing closer by), ran around Colbert, grabbed Angela by her sleeve, and also grabbed the sign. By this time, Angela was in the crosswalk a few feet from the curb with other protesters still nearby. Three cops threw her to the wet pavement, one grabbing her by the neck, and she was arrested. No one else was arrested at that intersection, though three dozen protesters were arrested throughout the day, some in the street, some on the sidewalk, some attempting to defend others from physical assault by police. 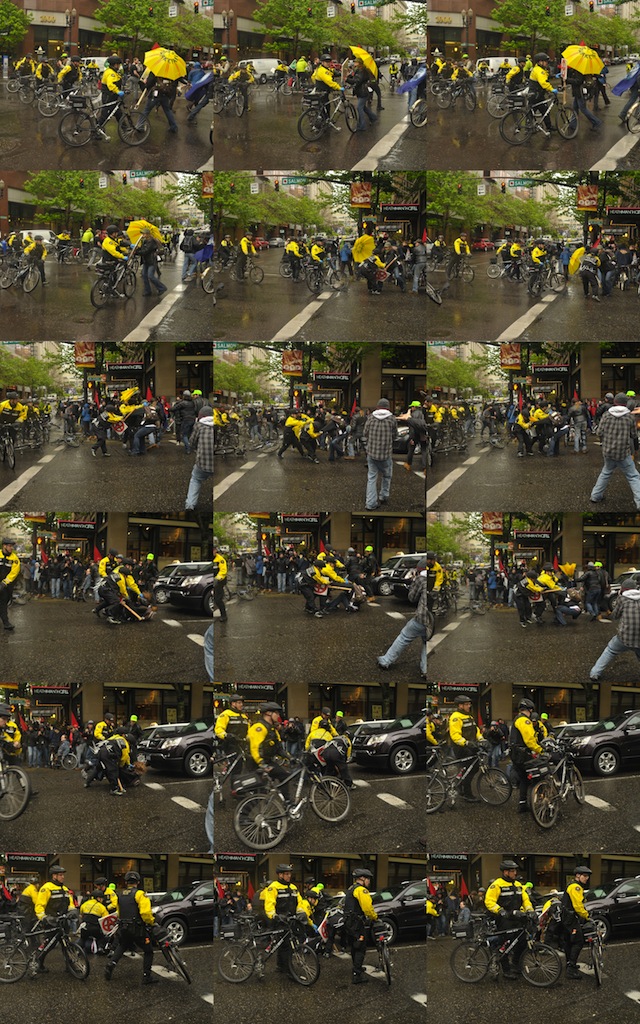 On Thursday, July 12, a six-person jury found Angela guilty on misdemeanor charges of Interfering with a Peace Officer (IPO), Disorderly Conduct 2, and Harassment.

Angela is my friend, and I feel angry and sad at this outcome. I want you to understand the kind of courage and compassion that Angela Hammit embodies so you can understand what this trial and verdict mean on a human level.

This wasn’t Angela’s first arrest since Occupy began. She’s still facing violation charges for her arrest at the Jamison Square sit-in last October and the eviction of Chapman Square on November 13. She was also arrested at the first occupation of Terry Schrunk (all charges against those defendants were dropped by the Feds).

Angela single-handedly began the arrestee support group that met weekly for months to offer peer support and give arrestees a collective voice in the community. She was especially concerned about arrestees who have limited Internet access and wanted to make sure they received the information they needed. She trained with the Facilitation Committee because she saw a need for more working-class perspectives to help translate class-cultural differences. She shows up in solidarity for almost every Occupy courthouse protest, hearing, and trial, traveling in from Beaverton. She and Donna Brelia organized the June 12 permitted FTP march and pulled pork picnic, a chance for victims of police brutality to come together and speak out without fear of further violence.

Going into trial, Angela and her attorney Pete Castleberry were optimistic that the video evidence that contradicted Billard’s police report would win the day. But it was off to a shaky start when in jury selection Castleberry asked if any of the sixteen potential jurors had participated in a protest. Not one had. When asked if they knew that a citizen has the right to defend themselves and their property from the police, they first looked surprised, then responded as if they had known all along.

Billard and Officer Jeffrey Bell, who was in the PPB PA van (aka the “ice cream truck”) that day making announcements, took the stand. Billard, it turns out, is the lead bike cop instructor for the PPB. Billard testified that “everyone in the intersection was getting arrested” and “my assumption was that people that were still there wanted to get arrested.” Yet only Angela was arrested and in the photos and video, there are clearly other protesters in the intersection. Later Billard said she feared protesters would try to “unarrest” Angela, which seemed to contradict her assertion that she believed Angela wanted to get arrested. 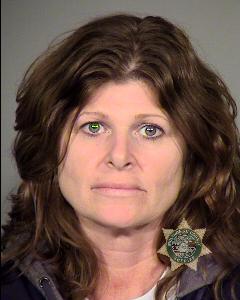 At one point, Billard’s testimony contradicted her own police report. When asked if she gave Angela any orders that day, she first said, “I don’t think I had a chance to approach her before the arrest.” The video also does not indicate she gave any order. When the DA attorney reminded her that her police report stated otherwise, she said, “Oh yeah, I yelled ‘Get out of the street.’” The DA attorney asked again, “Is that your recollection today?” Said Billard, “Yes. I mean, I wrote that the same day, so yes.”

When the State rested and the jury left for a break, defense attorney Castleberry moved for immediate acquittal of the IPO charge since the State had failed to provide any evidence that Angela heard any order, and even if she had, her actions constituted passive resistance—non-physical, non-violent disobeyal by simply being in the street—which is excepted from prosecution under the statute on IPO. Castleberry cited a case precedent in Eugene where a city ordinance was struck down because it failed to adequately distinguish between active and passive resistance.

Judge Walker didn’t dispute this argument, but decided to leave it to the jury to decide, saying that on three occasions in his long history on the bench a jury had decided differently from what he would have decided. This case must be the fourth.

The Defense began its case by calling the protester who captured video of the incident, Bryan Killoren. Killoren testified that Billard charged for Angela, went for her hands, and within seconds got Angela on the ground. Before that, Angela was just yelling and not moving quickly. His perception was that any action taken by Angela was defensive.

In testimony, Angela said that she reacted the way she did, by holding onto her sign and pulling away from Billard, because “I was afraid she was going to hurt me and destroy my property.” She’d already witnessed police beating protesters and slamming bikes into them that day, and at earlier protests. She described how police arrested her at the Chapman eviction, injuring her knee and taking her jacket, cell phone, keys, peace flag, even one shoe-—none of it returned.

In this video you can see Angela in the bottom left corner, sitting on the bench and signing peace with both hands until a cop asks her to move back into the crowd. As soon as she turns her back two other cops grab her from behind and arrest her. Many of us are still recovering from the physical and social violence of the Chapman eviction, Shemanski eviction, and May Day, and I cried with Angela in the courtroom while she testified. Later she told me she’d never cried telling these stories before and had wanted to maintain her composure.

When asked by the DA’s attorney if she knew the May Day march was unpermitted, she replied, “I thought the First Amendment was our permit.” Judge Walker roughly rebuked her for that statement. She explained to the jurors why she was there. “It’s my civic duty to protest. The economy has never been worse, the environment…I don’t see a future for my kids and my grandkids.”

Angela admitted she heard the ice cream truck order, but continued walking in the street—classic passive resistance, according to her attorney’s closing argument. The DA lawyer claimed that only falling limp to the ground qualifies as passive resistance. Angela also admitted that she hit Billard once over the back with her flimsy yellow umbrella, but that it was in self-defense. “I thought she was gonna beat me like the other cops were doing.” She also admitted that she used profanity (not a crime, last I heard). “I’d just seen them attack a 15 year old kid, and he’s a sweet kid. My daughter was 15 at the time.” For the Disorderly Conduct charge, the burden was on the State to prove that she was blocking traffic “recklessly”, when the evidence showed that she was marching slowly and traffic was already stopped.

The sentencing hearing is July 24, to give the judge time to consider and give Angela time to move. Although she has a full-time job, she can no longer afford rent for the house where she lives with her daughters. The DA recommended the sentence offered in the original plea, a combination of community service, bench probation, and a few days in jail. Angela told me, “This is just one battle. I don’t feel bad at all. I just feel sad that they [the jurors] didn’t get it. I don’t mind doing time. This is worthy of it.”

Angela is brave and determined to take risks for what she believes in. But I want you to understand that she’s not fearless. After her May Day arrest, she confided to me that she felt terrified. Still, when the DA’s office offered her a sweet deal—quickly followed by two even sweeter deals—she refused them all and instead took the risk of going to trial, to have a chance to speak to a jury and defend herself against the charges. Courage isn’t the absence of fear, it’s the willingness to do the right thing despite fear. In the end, the legal system is rigged, the public are propagandized, and the corporatized State is powerful. The State can make us scared, angry, intimidated, confused, homeless, even turn against each other. But they can’t stop us. 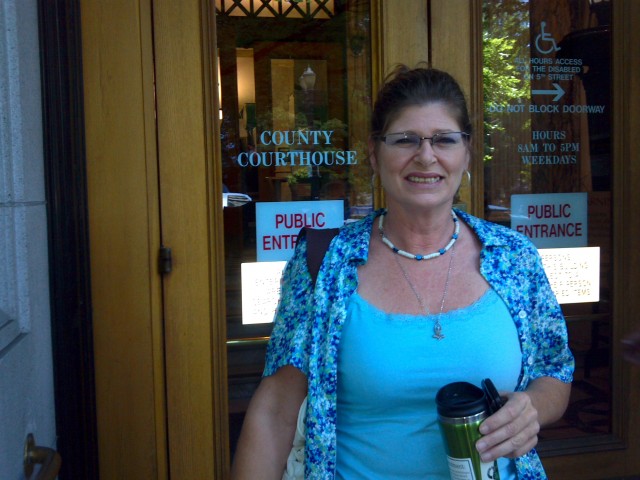 3 comments for “Convicted for Conviction”