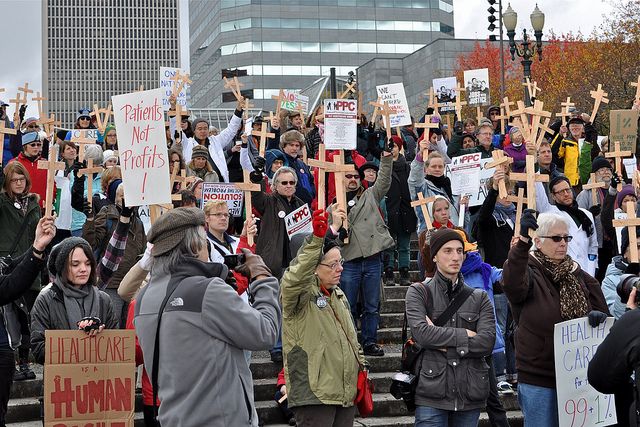 The political victory for President Obama in the Supreme Court has created an interesting shift in American politics. More important than the blow against his Republican opponent has been the re-energizing of Obama’s base–a loose coalition of liberals, labor and leftists.

Many in these groups were lured into supporting Obamacare because of the political forces aligned against it, especially loud right wing extremists. Obama’s campaign skillfully exploited this fact, such that a win for Obamacare became a strike against evil. The massive disappointment the President had been to his once enthusiastic supporters was swept aside amid anti-Republican euphoria–just in time for election season.

But aligning with Obama will have dire consequences for his allies, who are leaving the wider working class behind in an attempt to boost a President who hasn’t earned the support. With a weakened base, it is all but assured that the leverage liberal and labor groups need to make critical political demands in the face of the recession is gravely compromised.

The sad fact remains that most Americans do not support Obamacare, as poll after poll has shown. The pro-Democratic Party New York Times reports:

Keep in mind that the anti-Obamacare majority is comprised of many members of labor, senior, and liberal groups whose leadership endorsed the measure.

Indeed, Obamacare will directly and negatively affect labor and senior groups. The health care legislation levies new taxes on “Cadillac” health care plans–any policy that is above meager. Union members typically carry these plans, and employers are already preparing for the new tax by slashing benefits, with an aim to get them below the Obamacare tax threshold.

It’s no accident that Obamacare gives employers a strong incentive to weaken employee health care plans, but, rather, a key provision that will adversely impact millions.

Worse yet, the Congressional Budget Office (CBO) predicts that employers will cite Obamacare as an excuse to terminate employer-based health care altogether, creating newly-uninsured individuals who must then swim solo in the insurance pool.

The CBO predicts that three to five million are likely to be victimized in this way, though the figure could rise to 20 million. Of course, employers will take advantage of Obamacare to shift the cost of health care onto individuals, in the same way that employers steered away from pensions and into the 401(k) scheme.

Senior groups–most notably the AARP–supported Obamacare, even though it is partially funded by a $500 billion Medicare cut. Politifact explains:

“Nearly $220 billion [in Medicare cuts] comes from reducing annual increases in payments that health care providers [hospitals, etc.] would otherwise receive from Medicare…Then there’s another $136 billion in projected savings that would come from changes [cuts] to the Medicare Advantage program. About 25 percent of Medicare beneficiaries are enrolled in a Medicare Advantage plan.”

Of course, cutting Medicare reimbursements to health care providers will result in reduced care for Medicare beneficiaries, who already suffer from a shortage of providers. Most ominous are the legions who will be mandated to buy shoddy corporate health insurance they already would have purchased–had they felt they could afford it. (Only the very poorest will receive free health care from Obamacare).

Projections indicate that over 26 million will remain uninsured in the wake of Obamacare, while the corporate-dominated health care industry will swell with millions of new customers, ensuring that further health care progress will remain blocked.

There are undoubtedly progressive aspects to Obamacare. But the facts indicate that the plan will create anger in those same people being ignored by the labor and liberal groups who’ve promoted Obamacare–perhaps ultimately numbering in the hundreds of millions. This is the key point.

Working people are a powerful social force when they are united and acting collectively. By supporting a health care law that victimizes countless workers, labor and liberal groups cause unnecessary divisions. Due to deep
Democratic Party ties, these groups misled their members into supporting Obamacare for obvious political reasons.

These political ties are quickly devolving into chains for working people. Contrary to the opinion of some labor leaders, Obamacare is not a “step in the right direction”. Worse yet, since the Obama-attached left has misrepresented Obamacare as salvation, further steps toward a sane health care system are now frozen; these groups will not be inspired to fight for universal health, because they are happy–thrilled!–with Obama’s plan.

Most importantly, labor and liberal leaders have made it profoundly difficult to view Obama and the Democrats in the proper light: as political adversaries to be challenged in the streets. The jobs recession is again deepening, which will create further city, state, and national deficits that will be used to further gouge social services and lead to more layoffs.

The last four years have been detrimental to untold numbers of working people, and the political party overseeing this misery is going into the next election as a “champion of working people”, thanks to the stalwart working class leaders that support Obama.

A mass movement is needed for real change, but left groups are chained to a president who wants nothing to do with such a movement, as Obama more than proved by his attitude toward Occupy and Wisconsin. Obama has again disarmed the left, which will sadly repeat history by scrambling, post-election, to find an independent voice to deal with the recession and continued assaults on working people.

A mass movement is the only salvation for working people, requiring that uniting demands–a federal jobs program, Medicare for all, taxing the rich, etc.–be fought for in the streets against all opposition, both Democrat and Republican. Watering down demands to promote Democrats is a strategy that weakens the workers’ movement at a crucial time.

Hopefully, Obamacare will be history’s last example of this folly.