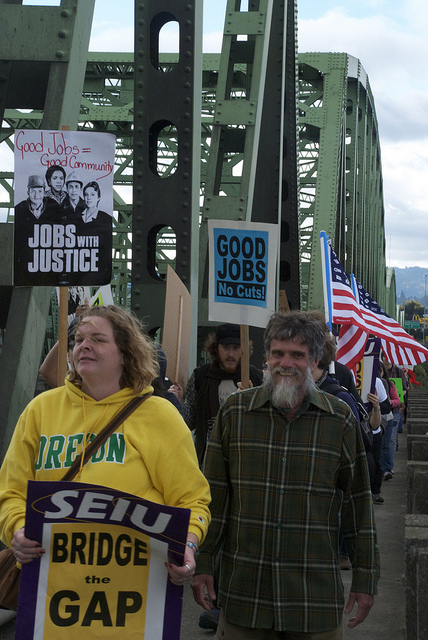 Before any problem can be fixed it must first be acknowledged. The jobs crisis stays in the shadows, out of mind, and consequently unaddressed. This is allowed to happen because those in power – Republicans and Democrats – both have political reasons to remain silent.

When the jobs crisis is discussed, the word “crisis” is seldom used, and the conversation is conducted with hushed tones and minimizing vocabulary. Therefore, when the monthly national jobs report was announced for June, there was quiet grumbling instead of passionate oratory; passivity instead of mobilization and action.

In the last three months the country added an average of 75,000 jobs a month. But job creation per month must be over 100,000 to keep up with young workers entering the workforce; therefore the real number of unemployed has steadily increased, on top of the mountain of already long-term unemployed.

The “real” unemployment rate – which includes those who gave up looking for work and those who want full-time work – rose to 14.9 percent in June, a total of 23 million people.

President Obama actually had the nerve to claim that the June jobs report was a “step in the right direction.” His election campaign chooses not to be interrupted by facts.

But the real story that the jobs report numbers tell is that this trend promises more unemployment. The economy has stalled and is threatening to slide backward again into recession. The “jobless recovery” that we now have is likely to evolve into a full-fledged depression.

Corporations already know this, which is why they refuse to hire more workers and are content sitting on their mountains of cash: why invest money in hiring or adding new machines if you think the economy may tank, spoiling the investment? Indeed, corporations have every right to believe the economy is headed downward. The New York Times explains:

“… ill [economic] winds are blowing in from both a contracting [recessionary] Europe [the biggest trading partner of the U.S.] and slowing growth in emerging markets [China, India]. Also, domestic lawmakers’ inaction on the upcoming ‘fiscal cliff’ creates uncertainty that is not conducive to hiring.”

What is this “fiscal cliff” that politicians and CEO’s talk about behind closed doors but rarely discuss on TV?  The New York Times continues:

“…the end of 2012 [the fiscal cliff] will also bring a torrent of federal tax increases [reducing consumer spending]… The government is also scheduled to lop off a huge chunk of federal spending [$500 billion in annual cuts] because of measures set in motion [the infamous “trigger cuts”] by Congress’s inability last December to come up with plans for longer-term fiscal restructuring.”

The reason these cuts are not being discussed – and the reason they are referred to as the “fiscal cliff” – is because after these measures are implemented, the already-stammering economy will be pushed “over the cliff” into recession.

Both parties refrain from talking about the fiscal cliff because they share the exact same solution: austerity – cuts to social programs (education, health care, safety net), government layoffs, and other measures to make working people pay for the nation’s debt instead of the rich and corporations.

The real state of the economy is also revealed by Wall Street’s clamoring for the Federal Reserve to again start printing massive amounts of money, called quantitative easing. This desperate move would never be considered in economic times of “relative stability” and threatens to create massive inflation at home and abroad.

Both Democrats and Republicans are aligned with the free market model of job creation, which amounts to massive state intervention to provide banks and corporations with bailouts, ultra-cheap/printed money, subsidies, tax breaks, etc., in the hopes that these corporations will hire people. These ideas have already been thoroughly disproved by events, yet nobody in power can put forth an alternative, since doing so would change the landscape of American politics.

What America needs is what was done during the last depression: a massive dose of state intervention against corporate and individual wealth, by demanding that their taxes be dramatically increased to fund a federal jobs program.

Until labor and community groups detach themselves from Obama’s election campaign, they will remain mum on this issue and be forced to support a so-called corporate jobs creation plan that promises more unemployment. The reason that labor organizations are not fighting for a real jobs campaign is because they have opted to tape their mouths shut and campaign for the Democrats instead, a fact that exposes them in front of their membership, who will in turn demand a new policy from their leaders. If the leaders fail to respond positively, their membership must demand a new policy and a new leadership.

Shamus Cooke is a social service worker, trade unionist, and writer for Workers Action (www.workerscompass.org) He can be reached at [email protected]