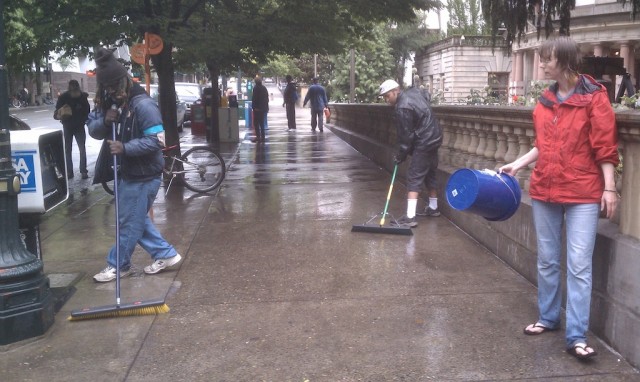 In yet another demonstration of the people’s rising gumption and grit, the sidewalk in front of Portland City Hall was cleaned up to a shine early Sunday morning. The cleaners included Occupy activists, long-term vigil keepers, one hunger striker, and the unhoused folks who have been sleeping on the edge of the sidewalk for months. As everyone knows, both the vigil and the hunger strike are calling for urgent and specific reforms targeting the rights of homeless people in the city. The vigil has continued in an unbroken line of commitment for an incredible seven months. Cameron Whitten’s hunger strike has continued in for an incredible 46 days and 46 nights.

In the days leading up to this scrubbing up the sidewalks action, the City powers-that-be and the corporate media collaborated to depict the vigil and the unhoused sidewalk sleepers as a public health hazard. This propaganda approach is of course the standard routine that we saw leading up to the eviction of Occupy encampments in cities all over the country. While the media ran a series of alarming and dreadful stories about rats and filth, the local government handed out a list of warnings to everyone in front of City Hall. In sum, this warning promised stricter enforcement of all ordinances they could dig up to target protesters and unhoused people who had the audacity to be visible in front of city government. The warning also announced that the sidewalk would be cleared off at 6 AM Monday morning in order to be power washed. Any unclaimed belongings left at the site would be confiscated and disposed of. 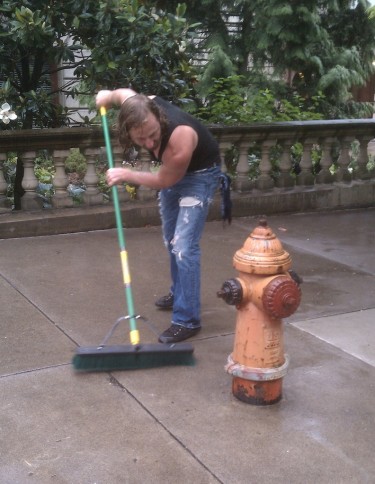 Facing this “power wash” and at risk of being swept under the carpet, the vigil organized our own clean-up a day before the city’s plan. This was intended to show that we can clean up when we want to, when we get together and cooperate. This is exactly what went down on Sunday morning, despite the early hour and the rain. The event was marked by a positive feeling of cooperation and solidarity, as several unhoused people joined in with activist volunteers to roll up their sleeves and scrub the sidewalks from 8 AM to 10 AM. By the time we left, it was the cleanest sidewalk in Portland. There is no need for the city’s alibi of “concern” to cover for a defacto political eviction. Occupy Livestream covered the entire event, as did KGW channel 8, including an interview with a visibly weary Cameron.

This camaraderie was expressed in spite of the threat by police to arrest us for using our own 4hp power washers. This was forbidden on the presumption that it would “illegally” block pedestrian traffic. Never mind that on Monday morning, the City itself “legally” blocked pedestrian traffic on the same sidewalk for hours in order to power wash the very same sidewalk that we had already cleaned. So the cleanup continued without aid of any machine or city hall water, by elbow grease and barrels of water rolled in by many hands.

What this brief action demonstrates is that 1) we can work together when motivated to do so; 2) that the corporate media, the government, and the police once again conspired to prevent us from manifesting this people power; and 3) it shows that we will not simply wither away and disappear simply because the pillars of business-as-usual are uncomfortable at having to witness abject poverty right under their own noses.

We cleaned up the vigil — not the city. And we will be back!

This coming Friday evening, July 20th, a big rally at City Hall will mark the 50th day of Cameron’s fast, and will demonstrate the broad support for the rights of unhoused folks to be free of dubious civic fines and police harassment. These activists also highlight the plight of all those on the verge of becoming homeless due to the ongoing foreclosure crisis.