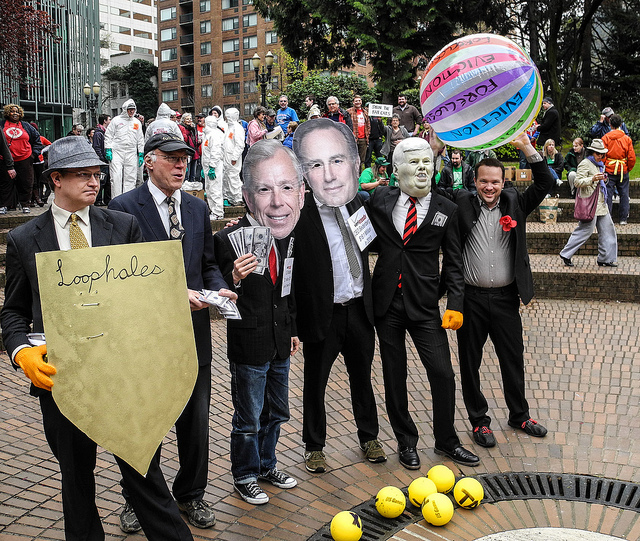 Though, for most, the London Interbank Offer Rate (Libor) interest rate fixing scandal appears distant and far too complex to understand, its potential consequences may be as economically devastating as a world war. Accountingdegree.net has created a fantastic infographic explaining the gist of the scandal.

The Libor is used to set payments on $800 trillion worth of financial instruments. It sets the prices that people and corporations pay for loans and receive for savings. Given that the fraud impacted $10 trillion in consumer loans, the Libor scandal will likely leave a long list of previous financial scandals that contributed to the Great Recession look like child’s play.

It also pulls back the curtain on the mechanisms behind the world economy, its anti-social priorities, its willingness to gamble away the future of billions of people, and the government’s collusion in these operations. The Libor scandal reveals that the “invisible hand” Adam Smith spoke of in explaining how a capitalist economy regulates itself has been transformed into the trained hand of a swindler.

The Libor and Its Problems

The Libor sets interest rates that banks charge one another to borrow on a daily basis. Eighteen large banks submit their assessment of what they anticipate credit would cost them. The four lowest and four highest calculations are thrown out, and the interest rate is determined as the middle figure among the remaining assessments.

While the method that the banks use to determine the figure they report to Libor is largely arbitrary, it is, nevertheless, assumed that they won’t take advantage of the process to game the system. This is a rather remarkable leap of faith since there are billions of dollars of profit if the banks can find a clever way to sidestep the rules. In contrast to popular knowledge, the Libor expects honor among thieves.

Clearly, this is naive in the extreme. It has recently been revealed that for years the banks worked with one another to submit interest rates to the Libor lower than their actual borrowing costs, thereby covering up the shaky condition they were in. Of even greater consequence, it is now acknowledged that the banks were rigging the Libor since 2005 to make the most profit from their bets on derivatives, and regulators knew it was happening.

So far, London-based Barclays Bank has been fined $455 million by the U.S. Commodity Futures Trading Commission (CFTC), the U.S. Department of Justice and the UK Financial Services Authority. This is likely a fraction of the money they made from their fraud. Its chief executive, Bob Diamond, was forced to resign, no doubt, with a handsome severance package even if he does have to give up some on the advice of the bank’s board.

Barclays Bank is just the tip of the iceberg. In several countries, 20 big banks are under investigation, including such behemoths as Citigroup, Deutsche Bank, HSBC, JPMorgan Chase, RBS and UBS.

Current Treasury Secretary Timothy Geithner and former president of the Federal Reserve Bank of New York, and Chairman Ben Bernanke have had to defend the Fed’s response when it first became aware of the fraud in 2008. While Geithner said he was “aggressive” in expressing his concerns, this ongoing scandal did not come to light until four years later.

Why the Regulators Failed to Regulate

The explanation for this contradiction is that the fraud the banks were committing was producing outcomes in line with the Federal Reserve’s own policies, though they were concerned about how flagrantly it was being done. In “The Meaning of Libor-gate” Paul Craig Roberts explains:
It is the prospect of ever-lower interest rates that causes investors to purchase bonds that do not pay a real rate of interest. Bond purchasers make up for the negative interest rate by the rise in price in the bonds caused by the next round of low interest rates. As the Federal Reserve and the banks drive down the interest rate, the issued bonds rise in value, and their purchasers enjoy capital gains.

As the Federal Reserve and the Bank of England are themselves fixing interest rates at historic lows in order to mask the insolvency of their respective banking systems, they naturally do not object that the banks themselves contribute to the success of this policy by fixing the Libor rate and by selling massive amounts of interest rate swaps, a way of shorting interest rates and driving them down or preventing them from rising.

The lower Libor is, the higher is the price or evaluations of floating-rate debt instruments, such as CDOs [Collateralized Debt Obligation], and thus the stronger the banks’ balance sheets appear.

The answer is yes, but the Libor scandal is only a small part of the interest rate rigging scandal.
The Federal Reserve itself has been rigging interest rates. How else could debt issued in profusion be bearing negative interest rates?

Later in the article Roberts succinctly points out:

Imagine the Federal reserve called before Congress or the Department of Justice to answer why it did not report on the fraud perpetrated by private banks, fraud that was supporting the Federal Reserve’s own rigging of interest rates (and the same in the UK.)

The Federal Reserve will reply: “So, you want us to let interest rates go up? Are you prepared to come up with the money to bail out the FDIC-insured depositors of JPMorgan Chase, Bank of America, Citibank, Wells Fargo, etc.? Are you prepared for U.S. Treasury prices to collapse, wiping out bond funds and the remaining wealth in the U.S. and driving up interest rates, making the interest rate on new federal debt necessary to finance the huge budget deficits impossible to pay, and finishing off what is left of the real estate market? Are you prepared to take responsibility, you who deregulated the financial system, for this economic Armageddon?

Obviously, the politicians will say NO and continue with the fraud. The harm to people from a collapse far exceeds the harm in lost interest from fixing the low interest rates in order to forestall collapse. The Federal Reserve will say that we are doing our best to create profits for the banks that will permit us eventually to unwind the fraud and return to normal. Congress will see no better alternative to this.

In short, the Federal Reserve and other political structures have been left to act as subordinate partners in the big banks’ schemes — the tail is wagging the dog.

The Magnitude of the Problem

The level of gambling that is being tolerated without a care by the wheeler and dealers of Wall Street is almost beyond comprehension. For instance, it has been estimated that the world’s annual gross domestic product is valued between $50 trillion and $60 trillion. This is peanuts compared to the exposure of the world’s financial markets to such speculation tools as derivatives. Paul Wilmott has estimated the total amount of derivatives being played in the markets is $1.2 quad-trillion. That is 20 times the amount of money currently in the global economy. As noted earlier, the amount of financial instruments pegged to the Libor alone is $800 trillion.

Despite the obscuring complexity and mathematical models used to justify such inflated figures, the fact of the matter is that they are still inevitably tied to the real economy of production and consumption. The farther they stretch into the stratosphere from this ground level, the more violently they snap back to earth with catastrophic consequences for working people. The Libor scandal combined with the government sanctioned gambling help to create greater economic crises around the bend.

There is no accountability for this mad lust for short-term, even if illusionary, profit at the expense of the economy’s long-term health. Those responsible are sheltered from the devastation they wreak with the hand out line of “too big to fail” and workers’ tax dollars.
This should be no surprise because these crooks own both the Republican and Democratic parties. What better evidence for this than, after being bailed out, the banksters are again continuing their speculative orgy and scandals while workers continue to suffer from the effects of the Great Depression? If the U.S.’s political parties had the least amount of independence from the financial elite, they would have jailed those responsible for the economic crisis, confiscated their funds, sharply raised taxes on the rich, and used this increased revenue for job creation, fully funded education, Medicare for all, and rebuilding our decaying infrastructure.

In addition to denying workers of revenue for these fundamental needs, those behind the Libor scandal have also used their interest rigging to rob already cash strapped municipalities and other local governments. While there are many examples of this that are dealt with in Pam Marten’s “Wall Street’s Biggest Heist Yet? How the High Wizards of Finance Gutted Our Schools and Cities“, one is enough to get the picture of how it worked:

According to the June 30, 2011 auditor’s report for the City of Oakland, California, the city entered into a swap with Goldman Sachs Mitsui Marine Derivatives Products in connection with $187.5 million of muni bonds for Oakland Joint Powers Financing Authority. Under the swap terms, the city would pay Goldman a fixed rate of 5.6775 percent through 2021 and receive a variable rate based on the Bond Market Association index (that was the predecessor name to the SIFMA index). In 2003, the variable rate was changed from being indexed to the Bond Market Association index to being indexed at 65 percent of the one-month Libor rate.

The city is still paying the high fixed rate but it’s receiving a miniscule rate of less than one percent. According to local officials, the city has paid Goldman roughly $32 million more than it has received and could be out another $20 million if it has to hold the swap until 2021. A group called the Oakland Coalition to Stop Goldman Sachs succeeded in getting the City Council to vote on July 3 of this year to stop doing business with Goldman Sachs if it doesn’t allow Oakland to terminate the swap without penalty. It called the vote “a huge victory for both the city of Oakland and for the people throughout the world living under the boot of interest rate swaps.”

In addition, many, in response to the Libor scandal have called for the reinstatement of the Glass-Steagall Act, which was repealed under President Clinton. This Act did help to prevent some of the worst current excesses. However, the situation with fraud has reached such monstrous proportions today that such a measure seems to be entirely inadequate. The shattered system of bank regulation cannot be put together by relying on the political players who are holding the hammers and profiting from deregulation. Starting out, any reform movement as a lobbying exercise is a complete dead end.

It will take an independent mass social movement to exercise the necessary force to abolish this kind of financial fraud. When the streets are regularly filled with millions united in protest accompanied by strike action aimed at helping the vast majority of working people, the roadblocks to reform are pulverized.

The Libor scandal points out the need for fundamental change in the banking system. While there will be some fines imposed and tweaks made, they will not even begin to clean the rot. The problem is that the interests of the bank owners are the polar opposite from the interests of workers and society in general. Their profit is our loss. You can’t control a system you do not own. The banks need to be placed under public ownership and their current private owners locked out.

Mark Vorpahl is an union steward, social justice activist, and writer for Workers’ Action – workerscompass.org. He can be reached at .

1 comment for “The Dark Heart of the Libor Scandal”