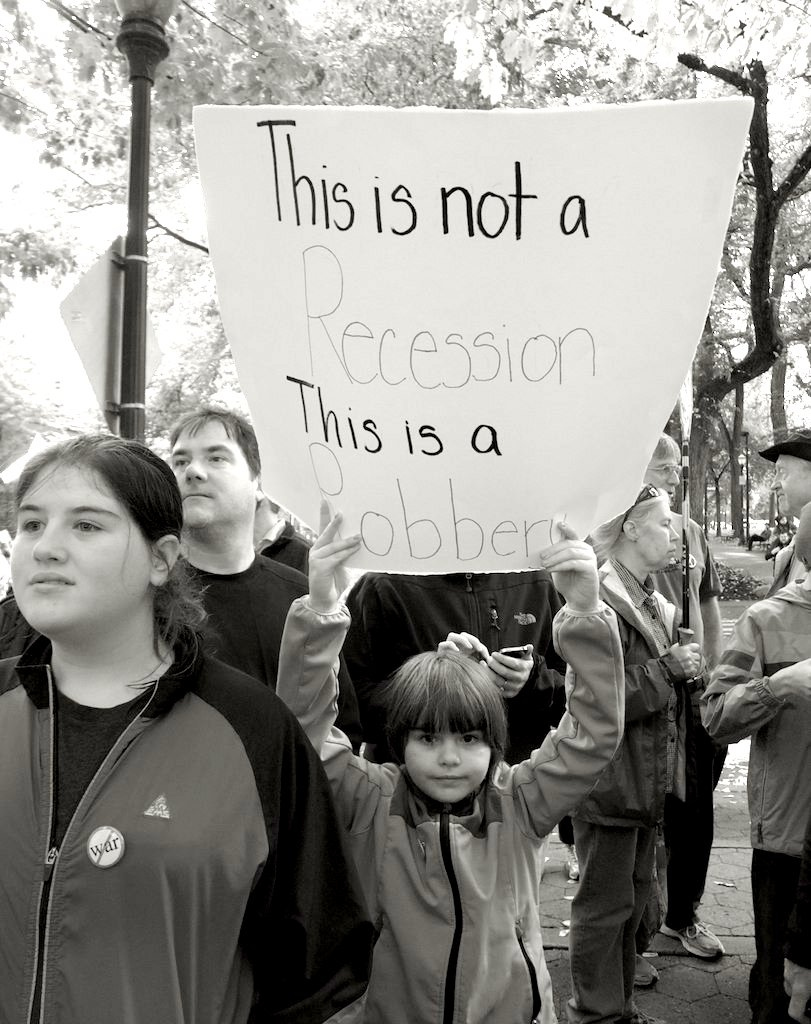 Thanks to Occupy, most working people are well aware of the growing inequalities in wealth. But for those who lack the specifics, former Secretary of Labor Robert Reich provides a useful overview:

In other words, not only are the rich getting richer, the rest of us are getting poorer.

Many factors have converged to produce these trends. Good-paying manufacturing jobs have migrated overseas. Technology has replaced many other good-paying jobs. More importantly, across the country many unions have demonstrated an overwhelming willingness to accept concessions without waging a struggle, thereby contributing to the growing inequalities. This willingness to give up hard won gains in turn has resulted in the continuing decline of union membership, which now stands at 8 percent. Who would want to join a union and pay dues only to make concessions? (In contrast, in the 1930s when unions were staging all-out fights for better pay and working conditions, and winning, union membership surged.) The decline of unions signifies the loss of a powerful weapon that can be used to defend the standard of living of the working class.

But the government has played an especially insidious role in contributing to growing inequalities. In their book, Winner-Take-All Politics: How Washington Made the Rich Richer – and Turned Its Back on the Middle Class (2010), Professors Jacob Hacker (Yale) and Paul Pierson (U.C. Berkeley) argue that changing tax rates have been a major factor in the underlying growing inequality.

Former New York Times columnist Bob Herbert provided a summary of their conclusions: “The authors … argue persuasively that the economic struggles of the middle and working classes in the U.S. since the late 1970s were not primarily the result of globalization and technological changes but rather a long series of policy changes in government that overwhelmingly favored the very rich. Those changes were the result of increasingly sophisticated, well-financed and well-organized efforts by the corporate and financial sectors to tilt government policies in their favor, and thus in favor of the very wealthy. From tax laws to deregulation to corporate governance to safety net issues, government action was deliberately shaped to allow those who were already very wealthy to amass an ever increasing share of the nation’s economic benefits” (“Fast Track to Inequality,” November 1, 2010).

Others have concurred in this assessment of the role of the government: “The state and federal governments are largely responsible for the widening gap between the rich and poor in the United States and should institute policy changes – including reforms to the tax code and more investment in education – to help reverse this 30-year trend, economists and researchers told state lawmakers Wednesday” (San Francisco Chronicle, Marisa Lagos, December 8, 2011, “Government Gets Blamed for Widening Wealth Gap”).

Government policy, then, is playing a decisive role in creating and accelerating the rate of inequality. The rich have taken full advantage of their wealth to lobby the politicians — Democrats and Republicans alike  — in order to secure passage of legislation that redistributes wealth from the working class and the poor to themselves. Consequently, while the wealth of the rich is soaring, their taxes are plummeting, further exacerbating inequalities and creating a vicious cycle: more money pays for more lobbying which creates more money.

Meanwhile, even though the income of working people and the poor has declined, their taxes have actually increased.

Robert Reich again provides a helpful summary of these trends: “Yet even as their share of the nation’s total income has withered, the tax burden on average workers has grown. They’re shelling out a far bigger chunk of incomes in payroll taxes, sales taxes and property taxes than 30 years ago. It’s just the opposite for the super rich. Over the last three decades, the richest 1 percent’s share of national income has doubled (from 10 percent in 1981 to well over 20 percent now). The share going to the richest one-tenth of 1 percent has tripled. And they’re doing better than ever. The median pay for top executives at 200 major companies was $9.6 million last year, topping pre-recession highs. Total compensation on Wall Street hit a record $135 billion. The heads of the top 25 hedge funds made almost $1 billion each. Yet, remarkably, tax rates on the very rich have plummeted. From the 1940s until 1980, the top income-tax rate on the highest earners in America was at least 70 percent. In the 1950s, it was 91 percent. Now it’s 35 percent. Even if you include deductions and credits, the rich are paying a far lower share of their incomes in taxes than at any time since World War II” (“Wealthy Americans not paying fair share of taxes,” April 17, 2011).

And this has led to one more brutal phase of the struggle between working people and the rich. Instead of raising taxes on the rich so that government programs could be properly funded, politicians have been swayed by the rich — despite their surging income — to go after everyone but them. Accordingly, public education has been cut, vital social services have been slashed, public pensions have been underfunded, and the list goes on, negatively impacting almost all working people in one way or another.

The corporate media has played a vital role in this struggle conducted by the rich. While reporting that inequalities in wealth have grown and taxes on the rich have declined, when it comes to budget deficits and underfunded pension funds, they conveniently fail to connect these problems to the tax structure, leading their readers to believe that there simply is no money anywhere available in society or the problem lies with too generous pensions, despite the fact that in California, for example, “almost half of California workers will face significant economic hardship in retirement” (Kathleen Pender, “California Workers to Face Hardships in Retirement,” San Francisco Chronicle, October 9, 2011).

In order to defend themselves and the kind of services that government should provide, working people need to mount a massive movement with a central demand: “Tax the Rich!” Of course, in the current period, only the unions have the resources and ability to organize such a campaign. Thus far many have chosen to provide only lip service to the idea of raising taxes on the rich while, instead, devoting their money and energy to electing Democrats to office, who then accept money from large corporations and the rich, who in turn demand more tax breaks. Meanwhile, union membership continues to fall.

It is time for the union movement to reclaim its historic role as the defender of working people and rise up to create a movement —independent of the politicians — by organizing huge demonstrations to demand higher taxes on the rich. This movement could then serve as the first step in the creation of an independent labor party that would represent not just union members but all the 99%.