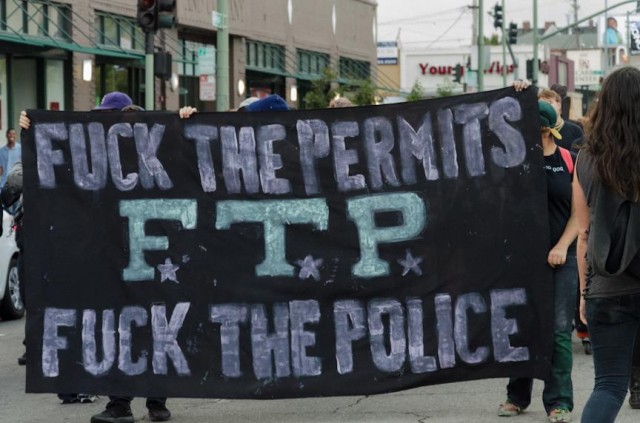 By the Oakland Commune

[On August 3rd], hundreds of Oakland rebels gathered during the monthly first Friday event to take over Telegraph for a rowdy street party with the aim of keeping things uncontrollable, spontaneous, bad for local developers and capitalists, subversive and fun. In recent weeks, the city administration and local business district associations have been preparing plans for cracking down on the growing crowds at the Art Murmur first Friday events which have transformed over the past year from a yuppie gallery walk to an epic street party bringing together diverse crowds from across the city. Their plans for control and containment were smashed to pieces last night.

The street party successfully took over Telegraph and inspired hundreds of others to do the same for over two hours. Case after case of free beer was distributed to the crowd along with spray paint cans which left FTP and anti capitalist slogans across the neighborhood. Music blasted from a sound system as hundreds danced for hours. As night fell, the crowd of over 200 moved towards downtown and ripped down the fence surrounding the empty lot at 19th & Telegraph for a third time since last fall when Occupy first took over the lot before being evicted by OPD. Slightly farther down Telegraph, cheers rang out from the crowd as the large plate glass facade of Obama’s Oakland headquarters was smashed apart while Obama campaigners ran for cover. The dancing street party continued on and continued to grow in size before dispersing a little while later. There were no arrests and the mood was rebellious and fun the entire time.

Below is the communique handed out during the action:

FUCK THE PERMITS
KEEP IT IN THE STREETS

Oakland’s Art Murmur is supposed to be about art, culture, and community. But all that it represents to the Uptown, Downtown and KONO business district associations as well as the city administration is an opportunity for commercial expansion and business development, a tool to further their agenda of gentrification.

In spite of this, recent months have seen Art Murmur explode with spontaneous energy, with the insurgent spirit of people’s free expression and free association. Rather than a controlled spectacle and disciplined promenade of compliant consumers, it has become a truly communal gathering, an epic block party, the night in Oakland when everyone is out and about in the streets. It is a people’s carnival of street artists, uncontracted musicians, unlicensed vendors, unauthorized performers, random revelers and rebel spirits of the community coming together simply to be together, to socialize and share public space, above & beyond the call of consumption.

When the Art Murmur Corporation took over the original permit from the Rock Paper Scissors Collective to manage the event, it was under the condition that community members be allowed to set up tables & use 23rd street free of charge & without permits. Now the city’s business elite are trying to enforce permit restrictions, sending us the message that our shared social & public space is not ours to use on our own terms. And they are bringing in private security forces to intimidate and coerce us into compliance—wielding the threat of violence and expensive fines.

We’re sick of getting pushed out of our own space. They say we should get permits, but the process is inaccessible, unaffordable, and there are never enough “officially sanctioned” spaces to go around anyway. Their intent is to target street artists and vendors as a means of regulating and controlling the community’s use of public space, for the benefit of expensive galleries, fancy restaurants and developers. The effect is to better provide the capital-owning business elite with a controlled and sterilized neighborhood full of passive armies of docile workers and obedient shoppers. Their ambition is to redraw urban geography according to profit motives, and convert public and social life into the plaything of private interests. This amounts to an attempt to rob us of every free and spontaneous aspect of our communities and our lives, and replace each of them with no alternative but submission and the compulsion to consume.

We refuse to surrender our space. We want to encourage the organic and rebellious elements of Art Murmur to flourish. We are here to exercise a vision of a liberated city full of free art, free music, free culture, free expression, and free streets.

We are spontaneous, insurgent, uncontrollable.
These are our streets, and we are here to take them.
FTP! FUCK THE PERMITS! FUCK THE POLICE!

A storm is coming… 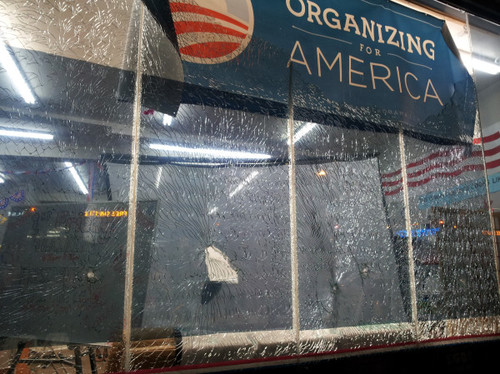 This story was originally published on Bay of Rage.