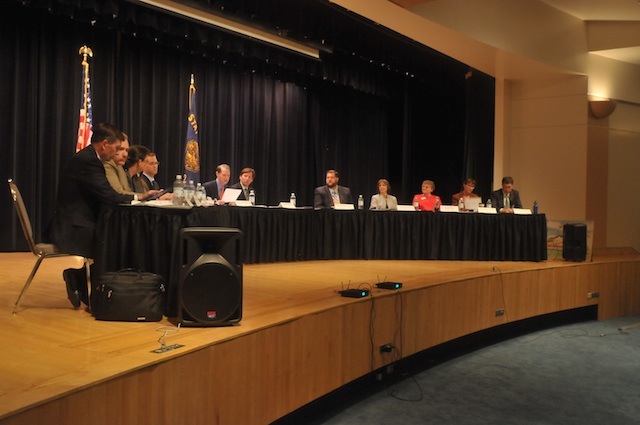 Senator Ron Wyden held a “listening session” in Portland on Monday to discuss the proposed Trans-Pacific Partnership, the latest in a line of sneaky, corporate, anti-democratic policymaking. Although the US Trade Representative is currently keeping all the details of negotiation secret from the public and most of Congress, we know (from leaks) it will be very broad in scope, infringe on lots of annoying democracy (in corporate speak, democracy is a trade barrier), radically change intellectual property laws in the spirit of SOPA and ACTA, and generally continue the era of secrecy that locks the public out of all important decisions.  As expected, the TPP was largely presented as an inevitability. Everyone who spoke in favor, and even some who spoke against, adopted the “force of nature” frame, which is what I’ve started calling it when people accept a social reality or proposed plan just because some authority asserts it and then treat the institutions involved as unopposable forces of nature instead of human beings whose plans can be repudiated and defeated by concerted political campaigns.

Though there’s plenty of fodder in the TPP, and the issue deserves intense scrutiny and attention, I’m going to focus my attention toward the other item of the day, coal exports.

Three panelists spoke specifically about coal. The first was Leann Rea, a Morrow County Commissioner. And though she seemed like a nice enough woman, she may as well have been a paid representative of the coal and rail industries. She seemed quite proud of that fact that schools in her county are being offered 10 cents per ton of coal that passes through Morrow County (while apparently the children on the other side of the river aren’t worth this bribe). One wonders whether coal will be stepping up to pay medical bills for the diseases associated with coal dust. Of course, this question probably hasn’t been asked since Rea also assured the crowd that there was no danger from coal dust because the coal companies told her they’d cover it all up. Well, golly gee. If those nice coal representatives say so, I guess it must be so. Conscience crisis averted. The audience found this line just as absurd as I did and heckled Rea until Wyden stepped in to demand respect for the speaker.

Rea wound down her talk by invoking the oft-repeated false dichotomy that it was either going to be us or someone else to give China that coal. She continued by arguing that since our coal is low in sulfur content, it will actually be better for the environment in the long run! Finally, she asserted the competitive notion that since someone is going to get the benefits from coal shipped to China, it better be us! In Eastern Oregon, this apparently is what passes for “striking a balance between the economy and the environment.” The audience seemed to find her reasoning childish and silly and the room filled with laughter and jeers.

By the time Kathy Fitzpatrick, Mosier City Councilor, got her turn on the mic, the anti-coal crowd was itching for an end to the pro-coal rhetoric. Fitzpatrick didn’t disappoint. She pointed out that running coal through Mosier, and The Gorge generally, would negatively impact regional tourism, the newly revitalized Mosier city center, schools, and new LEED certified housing developments. She heaped shame on the coal industry for pitting Oregonians against one another and proposed that we instead work together to protect our common heritage. Finally, she called on Wyden to stand with Senator Merkley and Governor Kitzhaber to demand the Army Corp of Engineers perform a regionwide cumulative environmental impact assessment for the proposed coal project. Her speech was well received by the audience and she received a prolonged and enthusiastic applause.

The last panelist of the day was Brett VandenHeuvel, executive director of Columbia Riverkeeper. VandenHeuvel reiterated the scale of the project: 30 full coal trains per day and 30 empty returning to the source. He also cautioned against trading away our unique Northwest culture for a short-lived economic gain. He accused Ambre Energy (one of the coal companies involved) of outright lying to the citizens of Longview about impacts from coal before having to pull their proposal. Revisiting Lea’s pro-coal claims, VandenHeuvel noted that there is simply no reason to continue to use coal, calling it a dead technology, and passionately asserting that we should just keep it in the ground. And, he echoed Fitzpatrick in demanding a region-wide cumulative environmental impact assessment. He ended his speech by asking members of the audience who opposed coal and liquefied natural gas exports to stand up. Nearly everyone in the auditorium stood.

Wyden, for his part, stayed right in the middle on every issue throughout the entire talk. He limited himself to uncontroversial demands like “transparency”, “balance”, “getting all the information”, and “creating jobs while protecting the environment”.

Strangely, in an event focused entirely on global trade, not one panelist ever used the words climate change or global warming. However, when it was time for the audience to ask questions, this omission was quickly remedied. Speaker after speaker passionately invoked the issue of climate change and noted the insanity inherent in continuing to mine fossil fuels, burn them, and fill our atmosphere with greenhouse gasses. One woman, who identified herself as a systems scientist with a PhD from the Massachusetts Institute of Technology, chided Wyden for continually claiming that we needed more information. She said that we have enough information on climate change and we need to act now; political discomfort is no excuse. Wyden responded by declaring his belief in climate change, but still declined to make any definitive statement regarding a region-wide cumulative environmental impact assessment.

Notably, several elected officials were in the crowd, including Portland mayor, Sam Adams. From the audience, he enthusiastically Tweeted his opposition to coal exports:

Of course, it’s great to see local officials and politicians line up against coal. But, it’s about time we started looking at what local government can do about it. My suggestion:

Excuse the abrupt transition, but what follows is my general idea for a local path forward in battling coal at home. Our forefathers in Oregon got some stuff right and were wise enough to enshrine “home rule” powers that give cities and counties a lot of power to make very strong laws at the local level. Because the Federal Government is apparently unwilling to do what is necessary to protect us from coal pollution and climate change, and since the State of Oregon isn’t far behind its ineptness, we’ve got to find another way.

In 1906, in the midst of a trend of national populism and oddly without using the words “home rule” in the text, Oregon voters passed the “home rule Amendment” to the Oregon Constitution in Article XI, Section 2. The text, in full, reads:

Corporations may be formed under general laws, but shall not be created by the Legislative Assembly by special laws. The Legislative Assembly shall not enact, amend or repeal any charter or act of incorporation for any municipality, city or town. The legal voters of every city and town are hereby granted power to enact and amend their municipal charter, subject to the Constitution and criminal laws of the State of Oregon, and the exclusive power to license, regulate, control, or to suppress or prohibit, the sale of intoxicating liquors therein is vested in such municipality; but such municipality shall within its limits be subject to the provisions of the local option law of the State of Oregon.

Later, Article VI, Section 10 of the Oregon Constitution became law and explicitly provided for county home rule. Importantly, “A county charter may provide for the exercise by the county of authority over matters of county concern.” And while the election of county commissioners is one way to implement local policy, “[t]he initiative and referendum powers reserved to the people by this Constitution hereby are further reserved to the legal voters of every county relative to the adoption, amendment, revision or repeal of a county charter and to legislation passed by counties which have adopted such a charter[.]” All in all, this section is very straightforward in its grants of power, but is subject to some qualification.

Paul A. Diller recently provided us with a summary our history of home rule in The Partly Fulfilled Promise of Home Rule in Oregon. Importantly, “Oregon courts have consistently read the Home Rule Amendment as establishing a strong presumption that civil ordinances are valid and not impliedly preempted by state law.  Although this strong presumption does not protect cities from express preemption by state law, it otherwise ensures that cities have broad authority with respect to policies they seek to enforce through civil means.”1 And, although, “[i]n recent years, the state legislature has with some frequency exercised its power to preempt local regulatory authority on significant matters of public policy, often at the behest of well-funded interest groups,”2 in matters related to the adoption and enforcement of environmental laws, current state policies are unlikely to pre-empt home rule. In Oregon, the first section of the Constitution asserts that protecting the peace, safety, and happiness of citizens is why our state government exists at all.3 Further, we’ve got a climate change policy.4 If coal transport harms human health (it does), burning it contributes to climate change (it does), and the State of Oregon acknowledges as much (it does), we are on solid ground invoking home rule powers to pass health and safety ordinances against the transport of coal. Absent a state law preventing us from taking action on environmental issues — I know of none — we are on strong footing in passing substantive legislation (as opposed to non-binding resolutions).

Since neither the Governor or legislature can be bothered to address the coal issue to the degree it needs to be, we should start at the municipal level by invoking state grants of home rule authority.  It is worth noting that the whole purpose behind having home rule in the first place is “is to enable local governments to serve as “proving grounds” for policies that have yet to win acceptance at the state and national levels.”5 If there were ever an issue that needed some courage, it is the suicidal march toward climate chaos and ultimate slap in the face that is running coal trains through the most environmentally conscious region in the country. This is a threat to public health and safety, not only for this generation, but for everyone to succeed us.

Of course, in order to win these battles in Portland and serve as a model for cities and counties in the region, we’ve got to build strong coalitions, create sound strategies, and demand audacity and courage from our public officials who clearly aren’t used to taking risks. If Wednesday’s listening session was any indication of Portland’s will to stop coal trains, we might be on the way to building that coalition.
Next is convincing ourselves that we can and must do something about it.