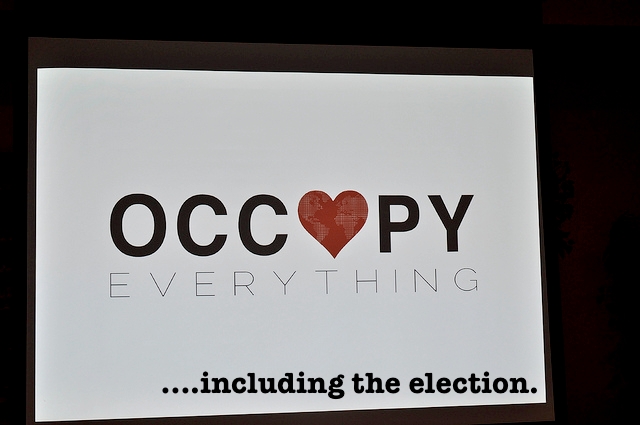 Excerpted from Shawn Fleek’s “Certain About Everything, Except What To Do”

The person I’m referring to would spend ten minutes describing rampant government corruption, the lack of participation, societal apathy, the cesspool of campaign finance, corporate power, and more. But they will not register to vote and participate in the official rule-making bodies. Some of the most-informed people with all the right ideas about the awful present have internalized a hopelessness that is beyond despair, into Stockholm syndrome and weltschmerz. Truly a disorganized, scattered mindset, which can so readily accept failure.

If registering to vote as a member of an “Apathy Party” were possible, would dis-organizers bother? They seem to have the entire platform memorized. Like most members of most political parties, they’re blind adherents to the doctrine and the dogma. The Apathy Party platform clearly states that the world is fucked up, so we should just leave it alone because it’s apparently just supposed to be fucked up.

The very idea that a single word of theirs would be wasted on describing anything not worth caring about is absolutely hilarious to me. Wasted words, in the Apathy Party platform, or on the street or a doorstep where I’m asking someone to register to vote.

Less hilarious in a “ha ha” way, and more hilarious in a “aww, shit” way, is that the government we have is the only tool we have to fix the government we have. While we spend the rest of our hours on exposing the corruption and demanding the real change, there’s an hour a year, roughly, where we take our trusty, rusty Swiss pocket knife and attempt to clean it… using only our rusty Swiss Pocket knife.

Fortunately it’s not considered cheating to put a little elbow grease into the process. And here is where Apathy Party dogma, the campaign rhetoric of the disorganizers, meets reality head on: it’s possible to get involved, even if you don’t. And if you know something is wrong but you’re not doing anything about it, you’re actually abetting the wrong thing to continue. I’m looking at Joe Paterno’s now-removed statue here. Or just the (HIGHLY TRIGGERING) awful case of the worst-homecoming-ever from 2009. The old adage rings truer each day, “evil will succeed when good [people] do nothing.”

America is a country with problems. Poverty is rampant. Women are paid less than men for equal output in nearly every industry and their health-care is constantly being threatened and maligned by anti-equality advocates. This is a country where gays and lesbians aren’t allowed to marry by Federal law. Where many 9/11’s worth of people die every year thanks to a poorly-crafted private insurance system which sells us treatments and not outcomes. Transgender people are denied basic equality, where poll-tax-equivalent voter ID laws prevent poor and minority voters from registering their opinions, where kids’ work produces value at a very early age, but people can’t vote until they’re 18 and usually don’t vote (see: Apathy Party) until they’re over 25. This is a country where people get shot in the face during a movie and some crackpots blame the movie industry, instead of the readily-available gun that the highly-unstable shooter was using. These are wrong things. Problems the American government, in conjunction with state and local authorities, could fix. Would fix, if everyone voted. Most people are not happy with this stuff. But most people don’t vote.