In this twisted world of ours, the solutions that most often move forward are those that end up creating a whole new set of problems. Dr. Robert Kehoe, the scientist who convinced the world that the use of leaded gasoline was safe (which has since been phased out of use due to extreme toxicity to our environment and health) was one of two scientists who also worked to convince us that fluoride in public drinking water is safe.

According to the book, The Fluoride Deception by Christopher Bryson, 98% of Western Europe does not fluoridate its water. They put it in their table salt, instead. With many Western European countries supporting socialized medicine, one would expect these countries to take measures to decrease dental costs through “simple solutions” like fluoridation, but they do not. Bryson also points to the efforts of Sigmund Freud’s nephew, Edward Bernays, known as “the father of public relations”, in helping get fluoride into communities across the United States.

Bernays was also instrumental in getting women to smoke cigarettes, likening them to “torches of freedom” during the Women’s Right to Vote movement of the early 1900’s. The BBC documentary, Century of the Self, explains Bernays’ role in the engineering of public consent and pinpoints when Americans went from being involved citizens to passive consumers thanks to the work of Edward Bernays. Now Portlanders are being pressured to consume yet another unneeded and potentially harmful service – fluoridation of our drinking water. But is the real battle to be fought with cavities or cavity causers?

With kale being touted as the new bacon by many foodies, it leads me to believe that the idea of taking care of our bodies is finally entering the mainstream. Here in Cascadia, TV, junk food and soft drinks–once considered the epitome of Western decadence–are being replaced by bicycling and green smoothies. Cavity sufferers know that their eating and hygiene habits are to blame. One does not get cavities by eating a healthy diet and taking care of their mouth. Not flossing, not brushing, eating sugar and drinking sweet acidic carbonated beverages are the true cavity culprits.

Portland is the last large city to have unfluoridated water and now several of Portland’s decision makers including Randy Leonard, head of Portland’s Water Bureau, are insisting that our water be fluoridated, too, on the basis that it will prevent cavities. The ironically named Upstream Public Health, the Portland group lobbying for fluoridation, is partnered with an extensive list of coalitions and other health and food groups around Oregon, including the Soda Tax Coalition.

The city estimates that fluoridating Portland’s water supply would cost roughly $5 million to install with a yearly operating cost of $500,000. Instead of addressing the problem head on, by taxing cavity causing foods, they opt to lobby for another costly “solution”. Obviously partnering with Upstream Public Health doesn’t mean they’ll push for your cause.  As citizens, we must ask ourselves: Do we throw more money at the problem, money that we don’t even have? Or do we feed two birds from one hand and empower children to make healthier food choices? 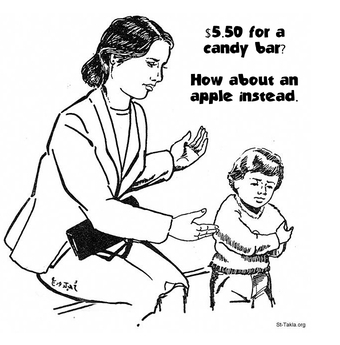 The subsidies junk food companies currently receive allow their products to be extremely affordable, and they use that extra income to produce a myriad of commercials constantly pushing junk food on Americans and Cascadians alike. McDonald’s, Nabisco, Coca-Cola, and the rest don’t care about your health–they only care about their bottom line. And when there’s a problem, public officials who sit firmly in the pockets of these corporations find solutions by spending more of your money creating quick fixes.

Fluoridating Portland’s water does not actually address cavities. It simply puts a glossy coat on a much deeper problem. If politicians had the gall to actually stop subsidizing junk food-like substances, we’d not only save money as individuals on things like dental care, we’d save money as a society on the entire healthcare infrastructure.

If Portland truly wants to show it cares about dental health, and health overall, then the solution should not be to throw millions at fluoridation but to earn millions while unmasking the true cost of junk food. Fluoride consumption should be a choice, not a mandate. And for those that believe the research that fluoride is a mind-controlling and IQ-lowering substance, we must also ask ourselves, “How will we keep Portland weird?”

5 comments for “Fluoridation VS. A Junk Food Tax”