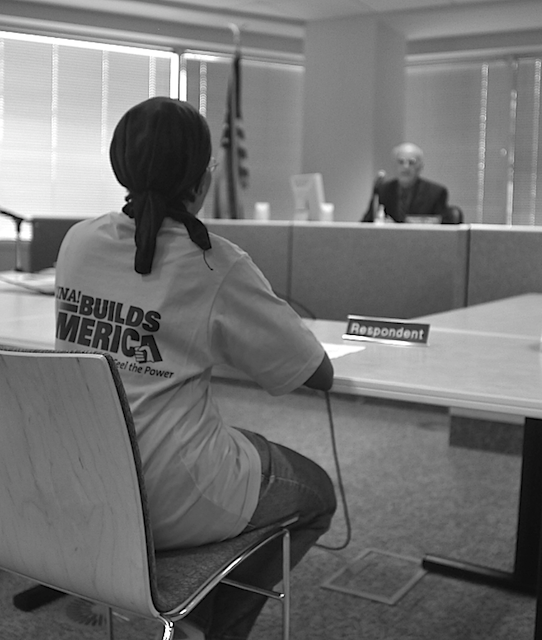 The notice on the door of Room 3000 at 1900 SW 4th Avenue —  home of Portland’s Bureau of Development Services (BDS) — listed the various administrative hearings that would be taking place on September 6, 2012.  I was present because I expected a 9 a.m. hearing between the City of Portland and Alicia Jackson, the woman who many community members helped move back into her home post-foreclosure on May 1. Particularly, I was under the impression the hearing was to revolve around Jackson getting her water turned back on, something she has been trying to do from day one.

My assumption, at least at first, appeared to be incorrect. According to a posting on the Auditor’s Office website, the case was in fact City of Portland vs. Fox Capital Corporation. No mention of Alicia Jackson was to be found; however, by the time Hearings Officer Gregory Frank finished administrative court introductions and explanations — including the fact that only those “party to the suit” may testify — the room was packed with over 40 people showing their support not just for Jackson, but for all victims of the various scams involving refinanced mortgages that have devastated individuals, families, and communities.

When Fox Capital was called a second time and did not respond due to no representative being present, Frank then turned to BDS inspector Mitch McKee to present the City’s case. Though legally the case was against Fox Capital, in flesh and bone reality McKee was speaking against Alicia Jackson.

McKee submitted over 20 exhibits into the record, including photos, notifications, tax assessments, more photos, a case history, and a notice of violation. The two violations McKee noted were Jackson’s lack of water service, and that gutters and downspouts were not connected to an approved disposal point. The inspector then stated that part of the bureau’s job was to “encourage neighborhood livability.” Apparently foreclosures are beneficial to communities, but Jackson’s downspouts and water issues, as well as the banner reading “Together We Are Unevictable” — hung from the duplex next door to her home on August 5 — were proving to be a grave test of the bureau’s resolve in its mission.

McKee requested a series of measures be taken that presumably were aimed at cleaning up the vicinity. Among the steps were levying steep fines, boarding up windows and other points of access to the house, and having Jackson vacate the premises — although Jackson was never officially named, since the city’s “legal” opposition was Fox Capital. McKee also requested Frank grant various enforcement requests that appeared to be unconstitutional, such as waiving the requirement of a warrant should anyone enter the home after it was vacated, thus necessitating it to be re-secured. He also asked that the city be given authority (again apparently warrant-less) to enter the outer property for abatement purposes should there be nuisance violations, as well as to monitor whether people were entering the property from the rear.

The language McKee used contained no humanity, a fact magnified by lack of a Fox Capital representative, thus creating an eerie similarity to Clint Eastwood’s gibberish-laden empty chair act at the Republican National Convention. Boiled down, McKee’s argument seemed to be, please provide the city with the resources to kick Ms. Jackson — a nuisance and neighborhood livability threat — out of her house and make sure she never returns.

The exercise was a glaring example of the extent to which our system values property over people. There we sat in a hearing room absent the identified defendant, while Jackson, the real subject of the story, waited patiently in the back corner for a chance to tell her story and thus enter some humanity into otherwise bloodless proceedings.

Frank was ready to issue his verdict and largely accede to McKee’s requests. He stated that while he found the lack of proper gutter connection a mild infraction, the absence of water was a hazard, both for the safety of the property’s occupant and the neighboring properties. Noting that only in one previous case had he refrained from vacating such a property, Frank stated that the only way ensure the present safety of the occupant and neighbors was to order the occupant — Fox Capital — off the property.

Turning on the water — a simpler solution to threatened neighborhood livability vis a vis the potential build-up of sewer fumes that might explode a house — had not been mentioned by BDS. Just before Frank was going to hand down his decision, one of the spectators asked why Jackson was not being allowed to speak. Perhaps confusing Jackson with Fox Capital, Frank said he had offered her that opportunity. The same spectator reiterated that Frank had not done so, provoking something louder than a murmur of assent from the gallery — an expression emphatic enough for Frank to announce, “If I hear objections from the room, I will have the room vacated.” Frank then invited Jackson to speak on the record. 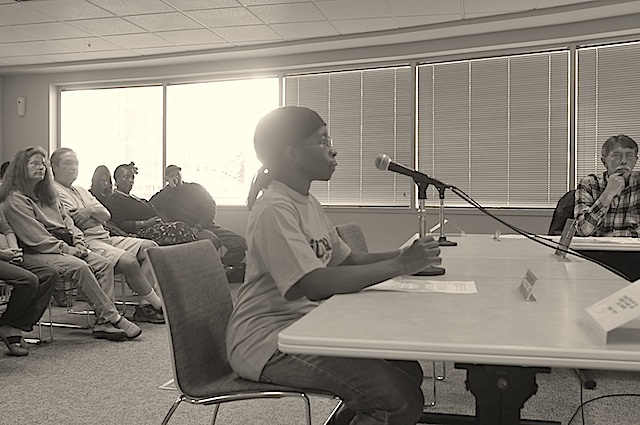 Jackson’s testimony reminded me of a visit I made to the Van Gogh museum in Amsterdam. In the main exhibit, Van Gogh’s work is arranged chronologically, beginning with the paintings he made in the Netherlands. The colors in those works are reminiscent of Rembrandt — shades of brown and gray with the occasional sunset. Toward the end of this section you encounter one of Vincent’s letters to his brother Theo regarding his move to Arles, France, and turning the corner, ZANG! you feel like Dorothy when she opens the door to her house after landing in Oz. It’s a stunning, technicolor contrast.

That’s what it felt like in Room 3000 when Jackson sat down to speak: The entrance of a person, not the corporate type recently recognized by the Supreme Court in its Citizens United v. Federal Election Commission decision, but a living, breathing, and passionate human being, completely changed the tone of the hearing.

Prior to her testimony, the pretense of the hearing was that Fox Capital, not Jackson, was the owner of the property, so Frank seemed surprised when Jackson stated, “Fox Capital seized my home in an illegal foreclosure that is documented and being contested.” Furthermore, Jackson’s testimony called into question McKee’s statement that BDS was acting to encourage neighborhood livability. “I moved back in on May 1, 2012,” said Jackson. “What I found was the the bank had left my home vacant for months, which made it susceptible to vandalism and needless decay.”

Jackson also noted what should have been an obvious violation, “a two inch hole in front of my house from the construction of the duplex next door on the other part of my stolen land. This hole is going to cause someone serious injury, yet the city inspectors drive right around the hole to deliver this complaint to me?”

It was a significant point, because in his testimony McKee noted at least three visits to Jackson’s property, including one that morning. In overlooking the hole, it appears that BDS is either incompetent or is engaged in a witch hunt against Jackson.

“I’m one of the many victims of mortgage fraud who’s fighting back,” said Jackson. “My question for this body is why the city is targeting me, an honest, hardworking, military vet who simply wants to live in my home in peace. Why isn’t the city working with state and federal agencies to investigate the illegal mortgage practices that are victimizing millions like me? Why is the city punishing me with a violation for lack of running water when I’ve made repeated efforts since May to pay the water bill and get the water turned on?”

Throughout her testimony, Jackson sat alone at the table and maintained poise and resolve under the gaze of Frank and McKee. Frank, who five minutes earlier appeared ready to kick Jackson out and who prefaced the hearing by telling those assembled he was “not here necessarily to make policy or decide what’s wrong,” seemingly did an about face, stating that Jackson was now a limited party — meaning she has every right to be heard at future administrative hearings in this case.

Frank asked Jackson how long it would take her to open a water account if he orders water service restored to the property and she said she would do it “as soon as it’s turned on.” Frank then asked McKee why Jackson’s water had been turned off and the BDS rep, who up to that point had possessed a commanding knowledge of all things involving Jackson’s property, replied that though he did not think it had occurred because of lack of payment, the records were “cryptic”, a comment which garnered derisive laughter from the gallery.

Frank then asked Jackson if she could offer him proof regarding her property dispute. Jackson said, no, and Frank gave her two weeks to produce documentation. Frank noted that the county tax assessor stated that Fox Capital was the owner of record and that if Jackson’s documentation gave him reason to see that as incorrect, it would put Jackson under obligation to get the water connected. If the water was not connected within two weeks of a decision that Jackson is the owner, Frank would then would order the property vacated.

Additionally, Frank said that if he decides Jackson is not the owner, he will order the property vacated. But should he determine  she is the owner and she does open a water account, the only civil penalty imposed will be the cost of reconnection. McKee then asked if it is determined Jackson is not the owner, will Frank grant the city’s requested abatements. Frank said that he would.

Finally, Frank asked McKee about the hole Jackson described on the property. McKee said he had not noticed it, which elicited incredulity from Jackson. Frank then said, “Mr. McKee, get the damn hole fixed.”

While she has received a reprieve, the outcome for Jackson remains dicey. But the odds were also against her standing her ground this long, a circumstance arguably due to the way in which community members bonded together to protect her and, by extension, themselves.

It does not seem a stretch to state that the only reason Frank allowed Jackson to testify was because of the presence of 45 community members who support Jackson as a friend and neighbor — human bonds that, despite Citizens United, can never enjoyed by a corporation.

“I’m really anxious to have my water turned back on. I do not intend to leave my house,” said Jackson during the hearing. “I do not intend to leave my home.” A house is a physical structure, a collection of wood, glass, concrete, various adhesives, and numerous other inanimate objects and materials. But a home is a sense of place and being where one feels love, warmth, and security — all the feelings that come from a wellspring called community.

If it comes to that, what will we say?