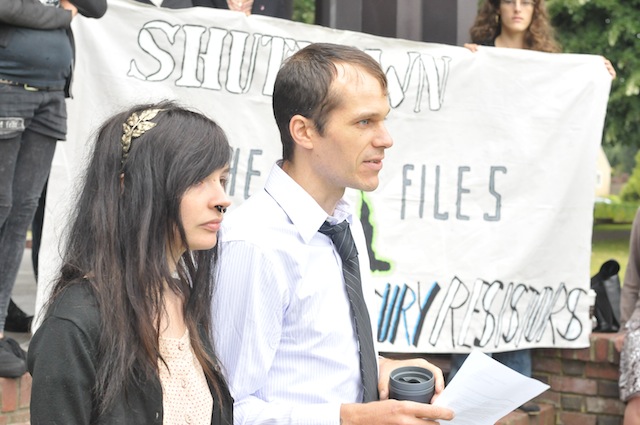 Back in the day, civics class taught us that the grand jury was among the government institutions that made the United States the greatest country on Earth. It was a shining example of our commitment to justice – a body that ensured you could not be accused of a crime without proof. If you were arrested and appeared before a grand jury, the prosecution had to present adequate evidence that an indictment was in order. If it failed to do so, you could walk away and breathe the clean air of freedom, knowing that once again justice was served.

Well, that’s the theory anyway; however, as Yogi Berra once noted, “In theory, there is no difference between theory and practice. But in practice, there is.” On Thursday September 6, four panelists at the Society of Friends Meeting House cast light on the practice of federal grand juries, a far cry from old textbook theory. The panelists covered ground ranging from grand jury history to its current use in the US – often as a tool of repression.

The presentations were timely. On September 13, Leah-Lynn Plante, one of two people swept up in the July 25 FBI raids, is scheduled to appear for the second time before a Seattle grand jury. At her first appearance on August 2, Plante appeared, identified herself, and then refused to answer any of the US Attorney’s questions; Her scheduled August 30 appearance was canceled. Plante has stated that she will again refuse to cooperate at the September 13 grand jury, a consequence that could cut deep, including a possible jail sentence.

Lauren Regan of the Eugene Civil Liberties Defense Center gave the first presentation, outlining a brief history and workings of grand juries: A subpoenaed person appears before a federal prosecutor and jurors. No judge, member of the public or lawyer is present (although a lawyer may be outside the courtroom, available for consultation). The “normal” rules of courtroom jurying do not apply, as the 16 to 23 jurors who compose the grand jury operate in secrecy and are not screened for bias. Neither the prosecutor nor the grand jury members may reveal what occurred in the room and witnesses cannot obtain a transcript of their testimony.

Contrary to idealistic theories, Regan discussed the reality of grand jury use to disrupt social movements, as in the case of Plante and the other six people that either have been, or are waiting to be, served in the wake of the July 25 raid. As Regan noted, grand juries are a useful tool for political witch hunts because people can be compelled to testify before a prosecutor not bound by normal courtroom rules which prohibit irrelevant, unreliable, or unlawfully obtained evidence.

Grand juries can be empaneled for lengths ranging from 18 to 36 months and the time frame is significant, because those refusing to testify may be jailed for the duration of the jury. Plante’s grand jury could disband in March 2013; however, a grand jury can be extended an additional 6 months, and a special grand jury for 18 months. In that event, Plante may be facing a jail sentence that could keep her behind bars until September 2013, or as late as September 2014.

After Regan’s presentation, Civil Liberties Defense Center Board Member Chris Richards read a letter from Nadia Winstead. Winstead is an Animal Rights Activist who refused to testify before a 2006 San Francisco federal grand jury. She was found in civil contempt, a decision later overturned by the Ninth Circuit Court of Appeals. Winstead’s moving letter, describing her resistance and its importance, provided a backbeat to the night, reminding those attending that resistance was not futile.

Hazel then detailed how grand juries target vulnerable people who may feel a greater compulsion to testify, such as a single mother with young children. One result of grand juries is the division of communities, as some resist their subpoenas and others do not, resulting in paranoia and distrust that can lead people to withdraw from activism.

A strong response to this repression is absolutely necessary, Hazel said. “Our challenge when repression comes to our community is to turn it back on the state.” Asserting that repression can and should be used to strengthen movements, Hazel urged activists to support grand jury resisters by education and organizing others to join the targeted movement. “It’s a tall order,” Hazel acknowledged, “but I still think it should be our goal.”

Hazel stressed the best grand jury strategy was to decline answering questions, get a great lawyer and assemble a strong community support team. If no one cooperates with a grand jury, she said, it takes the wind out of its sails. Finally, Hazel reminded the audience that if subpoenaed they should not fall into the false choice offered by the FBI between “you and them.” Rather, she urged folks to “take care of yourself while you are taking care of others, not at the expense of others. We should be us and them.”

The last speaker was Wombat, who was present in one of the houses raided on July 25. Wombat gave a brief summary of the Portland raids, as well as those in Olympia and Seattle – all revolving around May Day vandalism in Seattle. Wombat noted that all subpoenas appeared to be targeting anarchists, no surprise since “state oppression is the norm.”

Extending many of the points made by Hazel, Wombat told the audience that the “grand jury is a logical extension of all actions of policing oppression,” and a product of white capitalist hegemony in which power naturally goes after those who oppose it. With the “rise in anti-capitalism, anti-authoritarianism, and anarchism”, it is no surprise that the state and those in power see a threat, Wombat said, and are vigorously working to uphold their own power structures.

Wombat urged activists to create strong ties of solidarity with their comrades that included, knowing the people with whom you work and their backgrounds; having repeated interactions with your fellow activists; and confronting sources of tension and hierarchy within activist organizations in ways that do not invite external repression. Wombat also stressed the importance of keeping a strong, unified resistance to grand juries and all forms of government repression.

At the end of the presentation, Regan reiterated the importance of resisting grand juries, adding that if you comply with a grand jury subpoena and testify, you will find yourself being subpoenaed again and again. She also urged those subpoenaed to to make the information public.

Leah-Lynn Plante has not kept her subpoenas secret and has vowed to resist the grand jury. Though hers is a bold and principled stance, she will, as noted, need more than admiration. Community support is essential. Because she has been offered immunity for her testimony, Plante’s refusal to cooperate with the grand jury on September 13 could result in a finding of civil contempt.

If Plante is jailed for contempt, she will need even more support. To echo Joe Hill, as well as some of the panelists, perhaps the best way to do that is to take up the slack left in her absence and push her work further forward.

A rally for Plante and all grand jury resisters will take place outside the Federal Courthouse at 1000 SW 3rd Avenue, on Thursday, September 13 from 12:30 PM to 3:30 PM.

For information on Leah-Lynn Plante’s resistance and resistance to grand juries see: http://nopoliticalrepression.wordpress.com. 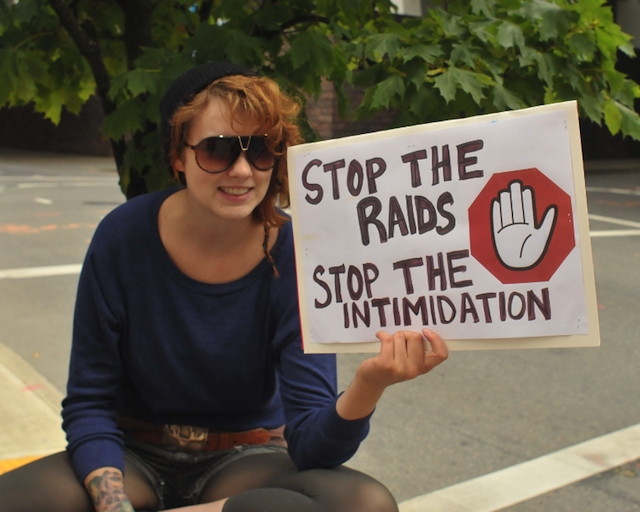