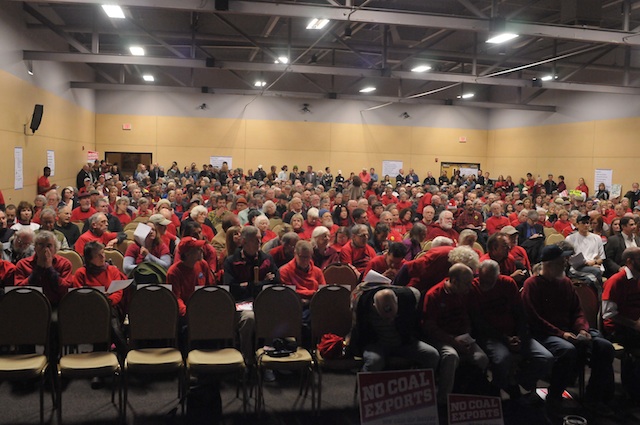 Over 800 people packed themselves into the Abridge ballroom of the Ambridge Event Center on NE Martin Luther King Boulevard on Thursday December 6th for the last of three Oregon Department of Environmental Quality’s (DEQ) hearings prior to DEQ determining whether it will issue a draft permit to Ambre Energy’s Coyote Island coal export terminal at the Port of Morrow. The majority of attendees–probably about 750, despite Ambre Energy giving away free caps–were opposed to the terminal being granted a permit.

The show of numbers was impressive, but even more impressive was how the people organized around stopping coal exports have rendered Ambre Energy’s act drab and repetitive. At a press conference held before the hearing, the groups organizing around stopping the coal exports brought forth some of the usual people who have been speaking at their events. Kathy Fitzgerald from Mosier spoke again about how the coal trains and barges, including the dust that will be spewed and the long traffic delays that will result from the upwards of eight 120 car long gondolas running through the Columbia Gorge Scenic Area, will harm agriculture and impede tourists’ access to the water and business district, potential realities that could affect all Columbia Gorge towns. Dr. Martin Donohue reiterated points about the detrimental health impacts of coal and the mercury resulting from its burning, as well as the need to get away from sources of energy developed in the 1800s and embrace those of this century.

But as well, speakers at the press conference also talked about jobs. About the only arrow left in the quiver of Ambre Energy–aside from its checkbook and envelopes addressed to various government officials–is jobs. Between the press conference and the hearing I wandered over to the Marquam Room where some people, I presume representatives for Ambre Energy, although perhaps also for other parties interested in seeing the permit approved, were shilling. Coffee and donuts were available, and you could get your caffeine and sugar high on while taking in the Oakland Raiders-Denver Broncos game on the big screen television on the west wall. The sound of players hitting each other, the crowd cheering, and goofy announcers making the same inane comments you can hear any game during the football season made for an interesting backbeat to the three people with whom I talked who droned on about jobs. I must have heard that word “jobs” 20 times. My eyes were glazing over and my ears began seeking some other wavelength.

“What about the coal dust hurting people’s health and dirtying our air and water.” “Jobs…blah blah blah…jobs.”

I probably would have gotten the same answer had I asked for their views on Bob Dylan’s latest album, my friend Mike’s recent root canal, or how many points Peyton Manning was going to put up on the Raider defense.

At least they were kind enough to offer me a cap with “Morrow Pacific” emblazoned on it, available in my choice of beige or blue. Despite the hearing being only a few minutes off, at least 60 caps remained neatly placed on two tables covered with white linens, awaiting heads to sit upon.

That should not be a surprise, and not just because the event was held in Portland. Ambre Energy’s jobs rhetoric is running thin, and it is being exposed for the garbage that it is. At the press conference Sattie Clark of the Voice For Oregon Innovation and Sustainability (VOIS) Business Alliance spoke of how Ambre Energy likes to talk about the jobs the Coyote Island terminal will bring, but does not talk about the kind of jobs. “Jobs must mean long term prosperity for our region,” she said, “not short term jobs that will make us sick,” adding that many of the 850 “trickle down” jobs touted by Ambre Energy “must be including health care workers” who will care for those suffering from various coal-caused ailments. In fact, those so-called trickle down jobs are largely low wage ones such as working at a coffee shop, and hardly the bedrock of a vibrant economy.

As well, Clark noted how nobody has run the numbers on how many jobs will be lost, not just because of reasons outlined earlier by Fitzgerald, but also because the coal, on public land and being mined for pennies on the dollar and shipped to China where there are almost no regulations, will be an immensely cheap source of energy for Chinese industry. U.S. manufacturers cannot compete with Chinese manufacturers under those conditions, but the way forward to prosperity, she said, was not only not to export the coal to China, but to create living wage jobs, not low wage jobs that threaten people’s health.

Marshall Runkel of GreenHome by EcoTech spoke about how his industry, making buildings more energy efficient, employs over a thousand people in Portland, and that these type jobs both retrofitting and building structures that are energy efficient represent a “real jobs program” that can provide long term employment for many people at living wages without the air and water pollution guaranteed by coal. Linking coal to logging, Runkel stated, “We saw this movie here with forestry. Boom and bust resource extraction is not the way to go.”

Comparatively, the hearing was a letdown, which came as no surprise. DEQ works under strict guidelines, and the permitting process too is guided by stringent rules. The jurisdiction of DEQ as it regards this permit is to see if the terminal will conform to air and wastewater standards as outlined by various laws governing emissions. In particular, the Coyote Island permit pertains to the air and water leaving the terminal, and any other issues–spewing of coal dust from trains, climate change, costs of cleanup, danger from explosions, loss of jobs, to name a few concerns–are beyond DEQ’s scope. Thus many questions were answered by the three member panel with some permutation of, “That is a valid question, but it is not under our jurisdiction.”

Understandably this rankled most of the crowd. But it’s important to remember these institutions and their rules were designed to benefit corporations. We may wish to believe that the Environmental Protection Agency and DEQ exist to protect us and the environment, but that is true only to a certain point. Imagine if you poured yourself a glass of water and then someone came along and put a few drops of motor oil in it and told you to drink up because he had not poured enough oil in your glass to make it dangerous according to certain standards. You’d probably not drink it, thinking that any amount of oil in your glass was disturbing.

But that is exactly what DEQ does, even as the people working at it probably have good and noble intentions. DEQ gives an official veneer to what should be unacceptable. Ambre Energy is applying for permission to put poisons in our air and water, but only what the EPA and DEQ deem an acceptable amount.

Furthermore, Ambre Energy’s own estimates will be used to determine whether they get the permit. Numerous people came forward to remind the folks from DEQ that Ambre Energy has lied before and should not be trusted, but the panelists said they had to make an analysis based on the information Ambre Energy provided. So long as Ambre Energy’s estimated numbers add up–that is that they make sense according to what DEQ and the EPA know–the permit will be well on its way toward being granted. And should those numbers turn out to be wrong, or considering Ambre Energy’s history, lies? Well, taking back a permit is no simple or inexpensive endeavor.

In short, the permitting process seems out of the hands of the people of Oregon and nearly totally in the hands of Ambre Energy. As it stands now, it is Ambre Energy that will determine the quality of our air and water, as well as set us further down the road toward unpredictable fluctuations in our weather due to climate change.

Much as with the ILWU grain handlers’ struggle at the ports of Portland, Seattle, Tacoma, and Vancouver, Washington has been illuminating the public, the much larger issue surrounding coal exports is that of community control. The coal Ambre Energy wants to export is on public land. The trains and barges will run through our scenic areas and use our ports. The coal dust and surfactant will pollute our air and water. The burning of the coal in China will send toxic emissions such as mercury to the United States, and it will contribute to global warming and subsequent climate change.

From Thursday’s hearing, it was clear that these are issues certainly out of the jurisdiction of DEQ. Far more importantly, we are also being told they are out of our purview. 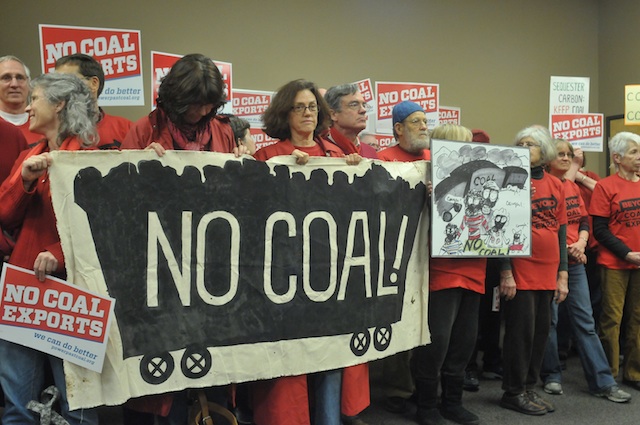