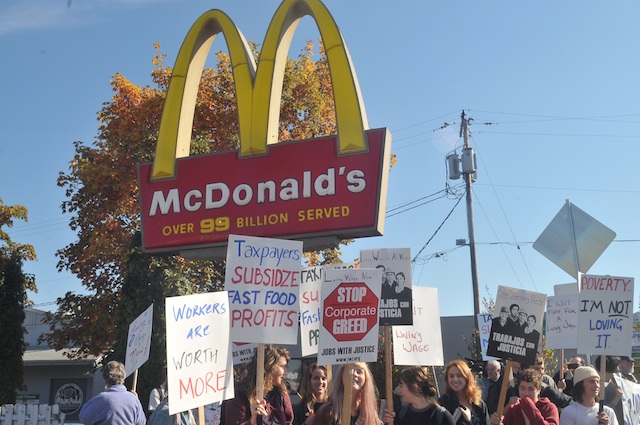 “If food is essential for survival, then why are the people who bring it to us paid so little?”

That question was recently asked at a forum regarding the many fast food worker strikes across the country over the past year. Those workers, many of whom make the federal minimum wage of $7.25 an hour (the Oregon minimum wage is $8.25 an hour), have been demanding a raise to $15 an hour. With the economy still in the tank for most working people, the idea of demanding this increase to a living wage seemed only fair, especially as CEOs who don’t do the actual work of getting customers their food are earning high salaries, and then much more in stock and incentives.

On October 15th a crowd of about 60 people gathered at lunchtime outside of the McDonald’s on SE Powell and 28th in support of fast food workers being given a living wage increase. Chanting slogans such as “No burgers, no fries, we want our wages supersized!” and “At $8.95 we can’t survive!” the ralliers milled around on the sidewalk as numerous cars honked their horns in approval. The rally was part of a national day of action honoring the work that fast food workers do and demanding their wages reflect the value of their work.

“People have a right not to live in poverty and be paid an affordable wage,” said Rob Sisk, President of Service Employees International Union (SEIU) Local 503. “They have a right to earn more than poverty wages and to take home a living wage.”

Magarito Joy, who attended the rally with her young son, works a minimum wage job at a coffee shop. “I get paid minimum wage, but I can’t live on that. I have a kid. Minimum wage doesn’t cover the cost of food for us. Fifteen dollars an hour is a start. I’d like it higher. The money is being saved for the people at the top–CEOs, presidents. We want a more even distribution of the money.”

More than 20 students from Cleveland High School, not far from the McDonald’s, also took part in the rally. “We’re going to stand in solidarity with these McDonald’s workers and all low wage workers,” said CHS student Ian Jackson.

According to a new report from the University of California Berkeley’s Center for Labor Research and Education, between 2007 and 2011, the cost of public assistance to families of fast food workers was almost $7 billion a year. “McDonald’s likes to keep the minimum wage low, but not for CEOs,” Sisk told the crowd. “That $7 billion subsidizes McDonald’s.”

The people at the rally ate at neither McDonald’s nor the Wendy’s across the street, but they did not go hungry. The Red and Black Cafe, celebrating its 13th birthday, provided lunch.